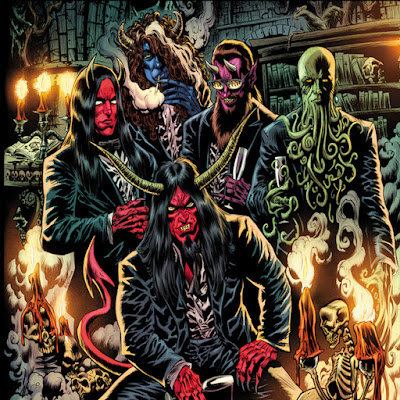 Now, I'm not saying that no one knows who Bobaflex is, or that they have had no success at all, because they have.  Tracks such as "Chemical Valley", "I'm Glad You're Dead", "Bury Me With My Guns On", and the excellent cover of "Sound Of Silence" have all made dents in the charts and on rock radio.  But the sheer talent this band brings to the table, from the infectious hooks and churning guitars, to the pounding drums and the extremely tight vocal harmonies, Bobaflex delivers so much more than your average modern hard rock band.

On Eloquent Demons, Bobaflex ups their game to a height they have not previously reached, and that's saying something.  Yeah, yeah, there's a dreaded (and, to my ears, somewhat dreadful...) intro that I have played exactly ONE time, but once that mini-distraction is out of the way, this is a fantastic hard rock record!  From the blistering hard rock of "Reckless", the scorching "Say What You Will" and the heavier, more groove-intensive "Long Time Coming", to the outstanding, melodic cover of Pink Floyd's classic, "Hey You", Bobaflex shows a musical flexibility not commonly found today.  Elsewhere, "Real Sadness" will likely have people making at least loose connections between the band and the sludgy, grungy metallic tones of Alice In Chains, which is a dang good thing for this guy.

If I had to pick a favorite track that really sums up what Bobaflex has created here, I would have to point to the truly excellent, "I Am A Nightmare".In many ways, this track reminds me of some of the dirtier, grittier Sunset strip bands, especially when you hear the killer vocal harmonizing and the absolutely SCREAMING guitar solo, not to mention the sneering attitude the track is delivered with.  Sure, it's still a modern sounding track, as should be expected, but the throwback attitude and execution can't be overlooked.  I absolutely love this track and would relish the opportunity to hear it performed live.  It is a guarantee that this song is going to be dropped immediately into my personal Bobaflex playlist that accompanies me to the gym on a regular basis!

"Off With Your Head" doesn't really deliver in quite the same way as most of the rest of this record, though it is impossible to deny the catchiness of the simple melody and the delivery of the chorus, which can only be described as tongue-in-cheek, considering the aggressive-sounding title.  However, this little hiccup is quickly covered up by the howl of a wolf, the pounding of drums, and the chugging guitars that lead "Moon And Shadows" in.  Classic Bobaflex right here, as the rhythm section is insanely tight and just dares you to not start pounding your fists and snapping your neck along with the beat, even in its slightly off-kilter moments, which only further add to the intrigue of this penultimate track on the record.  And speaking of those bass and drum sounds, Johnson and Tolland deserve a hearty round of applause for their efforts on this record, as they do an excellent job of being the backbone of this rock-n-roll monster of a record.

The mix and production here are very solid on this first effort from the band on their new label, Thermal Entertainment.  The artwork is pretty much standard Bobaflex fare, which means it's pretty dang cool, but I can't make any further comments about the packaging here, as mine is a digital promo copy.

To say I am a fan of Bobaflex is an easy call to make, and I have had the pleasure of meeting and hanging with the guys after a live show.  And as much as I have thoroughly enjoyed their previous efforts, especially Charlatan's Web and Anything That Moves, there is no doubt in my mind that Eloquent Demons has taken the band to a new level.

These guys tour pretty much non-stop, so there is really no reason to not take in a Bobaflex show somewhere relatively close to your neck of the woods.  It will be a killer show, no question.

Rating:  Crank this sucker and crank it mightily!  Definitely an 9 for Eloquent Demons!

Posted by arttieTHE1manparty at 8:00 PM