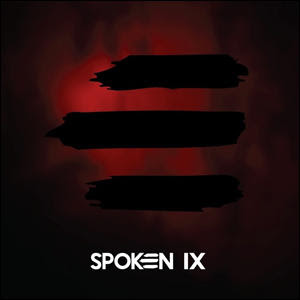 Spoken returns after not quite 2 years to follow up their highly regarded album, Breathe Again,with the aptly-named IX, the ninth album in the band's career.  Matt Baird is the sole remaining member of the band and is, in fact, now the only member of the band period according to Facebook, with Scoop Roberts retiring from touring last November and announcing that this would be his final album.

When I talk to my musically-interested friends about Spoken, the number one thing I hear is "all of their songs sound the same".  To the uninitiated who have only heard the crushingly heavy moments from the band, I guess I could kind of understand where they are coming from, although I would personally disagree, as despite the often-screamed-vocals approach utilized by Baird, there is definitely diversity in the structure and musical approach of even the heaviest material the band has put on record.

Speaking of heavy, Spoken comes charging hard out of the gate on this record, with "This Is Not The End" featuring some seriously aggressive guitars, matched by the ferocity of Baird's vocals as he screams about not giving up and not losing hope, even in the darkness of one's life.  "Stronger" seems to pick up where "...Not The End" leaves off, lyrically, as it encourages the listener to soldier on, declaring "what is left of me will never give up the fight".  "I Will Not Fade" is probably the heaviest track on the record, with some seriously crushing guitar riffs roaring over the top of some electronic elements and setting the stage for some truly angry, throaty snarls and screams from Baird as he tells the listener "it's not too late to rise above all the regrets, all the mistakes that I've made".  Of the hard-hitting material, this is my favorite track on the record with its pummeling pre-chorus, relentless drumming, and vocals that alternate between the harsh and the melodic.  The complete package for long-time fans of the band, to be sure.

"Remember The Memories" has to win the award for most redundant title...possibly ever...but it is a solid, slightly slower song, with a great message about the legacy we leave behind.  "Pages Of The Past" then ramps the energy back up with some more electronic elements and heavy guitars, but for some reason this track just doesn't jump out at me like several of the others in the first 2/3 of this record.  Not a bad song, just not memorable, I guess is what I would say, and certainly doesn't grab hold of me like "I Will Not Fade".

The last three songs on this record take a SERIOUS left turn from the rest of the album, as Spoken downshifts into a mellower mode.  "The Light" is what I guess I would call a "typical" Spoken ballad, with a solid modern rock approach similar to some of the material from the past two albums. "Sleepless Nights" is a simply gorgeous ballad, chock full of soaring guitar work that reminds me very much of the harder-edged adult contemporary work David Zaffiro (ex-Bloodgood) did with his last couple of records.  Seriously, I had no idea Spoken had this kind of musicality in them.  And as if to prove "Sleepless Nights" wasn't a fluke, album closer, "In My Sight" features some equally excellent, soulful guitar work and finds Baird challenging himself for what his most expressive vocal performance is on this, or any other record!  To those who complain of the sameness of Spoken's work, I would rapidly cue up this song and let them explain where they have ever heard Spoken sound like this in the past.  Truly excellent musicianship here and two of the best songs I have heard from the band...ever, in back to back fashion.  Love it.

I have searched high and low for the rest of the musicians on this album, if there are any, but none are listed in the sparse notes of this album, so perhaps Matt and Scoop did everything here.  Four of the tracks here get co-writes from Josiah Prince, guitarist of Disciple, but there is no mention of him playing, and there are really are no musical similarities between the bands other than the fact that they are both heavy modern rock, but who knows.  My copy is autographed, but I can't make heads or tails of the names scrawled in gold on my album cover!  The "band" is currently on tour, so SOMEBODY has to be playing with Matt, and when I figure out who performs what on this record, I will definitely amend this review.  Regardless, this is a great effort,with some extremely heavy moments, along with a fairly standard Spoken balled followed by two of the band's most laid back, musically emotional moments...ever...on the final three tracks of the record.

If you are wanting to dive into this band for the first time...or if you are wanting to introduce a friend...I wouldn't likely recommend IX as the ideal starting point; for that I would probably suggest Breathe Again, although Illusion is a really good record as well, and I am a fan of the band's output on Tooth & Nail Records also, especially Spoken.  That being said, IX is a record that I think any fan of the band should seek out so that they can experience the growth and musical diversity of what too many people label as a one-dimensional band.

Rating:  Crank this to a 7, with the diversity being a huge bonus here, even if the track listing is stacked a bit oddly, at least to me.

Back To Reviews Index
Posted by arttieTHE1manparty at 8:51 PM