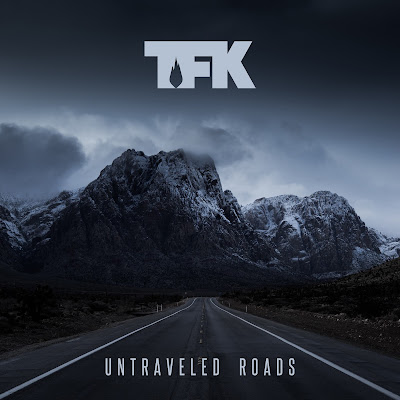 Thousand Foot Krutch offers up their second live album in just five years, which is a bit of an oddity, especially since the band is independently releasing Untraveled Roads on their own TFK Music label.  Frequently, live albums are contract fillers, but that is obviously not the case here.  What the band does do differently this time around is they focus exclusively on material from their past three albums, so some long-time fans may feel a bit shorted on the tracklisting, and issue we will get to in just a minute.

Untraveled Roads was recorded during this year's WinterJam Tour, which found the band making 46 stops in front of over half-a-million people.  All of that touring has served TFK well, as the band on this record is a finely tuned, well-oiled machine, firing on all cylinders and packing a ton of energy into these 12 tracks.  McNevan showcases an excellent live range and solid vocal command throughout the set, only shifting to a lower key on a couple of occasions, seemingly more to catch his breath for the next section than simply because he couldn't hit the notes.  This is most obvious on the second track, "Light Up The Sky", where he drops lower for the chorus intro, "excuse me while I...".  However, he is able to rip the top off the higher ends of the chorus here, and throughout the rest of the record, so this was likely done for dramatic effect, or simply to save a bit for the rest of the show.

The mix is excellent here, with plenty of bottom end throughout, and touring guitar player, Andrew Welch, nails his parts at every opportunity. I'm not sure who is doing the backing vocals (I believe it's Bruyere), but they do an really good job of supporting the high-energy McNevan, who is surpassed only by John Cooper from Skillet as the most active, most dynamic front man in the Christian rock industry.  Speaking of McNevan and TFK being a Christian band, the singer does take a brief moment at the end of track eight, "Courtesy Call", to talk to the crowd about Christ and his faith, but he isn't preachy by any means, rather speaking conversationally to the audience about being accepted by Christ rather than being concerned about being accepted by today's culture, which leads into one of the band's most recent hits, "Be Somebody", which is given even more of an emotional punch in the live setting.

As I mentioned previously, the track listing here comes exclusively from the last three albums, The End Is Where We Begin, Oxygen: Inhale, and their most recent studio effort, Exhale.  As such, there are a few tracks that I was surprised weren't included here, most notably "Fly On The Wall" and "I Get Wicked" from The End..., and "Lifeline" from Exhale.  It's also very hard for me to not wait for long-time fan favorites like "Rawkfist" to show up in the mix somewhere, and I'm not going to lie, I would've LOVED to hear the band throw in their cover of Collective Soul's "Where The River Flows", although that would've obviously been a real stretch for inclusion here...but hey, a guy can dream, right?

All in all, I found Untraveled Roads to be a fun listen, and a largely complete collection of their greatest hits from the past five years.  Overall, the missing classic songs notwithstanding, I think this is a better live record than Live At The Masquerade, which is saying something, as I thought that live record was very well done overall.  But the sound quality of the band here is just that much better, that much tighter, that much more polished and yet still punchy. The band is in complete control of their sound and presentation throughout the record, and I sincerely hope there is a live DVD to go along with this CD so that people get the chance to see these guys in the live setting.  Better yet, if you get the chance, you should do yourself a favor and head out to see them live if you get the chance.

Rating:  I generally don't "rate" live albums, but I will say that this effort from TFK is definitely crankable and very enjoyable.  What the heck...crank it to 8 and let the sparks fly!

Back To Reviews Index
Posted by arttieTHE1manparty at 9:38 PM