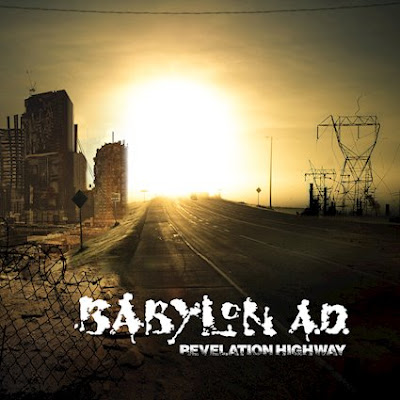 This history of the 80s/early 90s hard rock scene is littered with bands that had brief, shining moments, only to fade as rapidly as they seemingly arrived, falling off the face of the musical landscape for totally random reasons.  Labels folded.  Bands broke up or members left.  Radio wouldn't play a particular song by a particular band.  MTV didn't think the band had "the look".  But none of these things really explain the rapid ascent, and even more rapid descent of Babylon A.D.  Hitting the scene in 1987, the band was signed to Arista Records by the legendary Clive Davis, and their debut album was out approximately 18 months later.  Three singles from that self-titled debut album hit number one at metal radio.  Their certified gold album spent nearly 40 weeks on the Billboard Top 200 albums chart.  Multiple videos graced the airwaves at MTV.  The band was rolling right out of the gate, and I LOVED them!  I wore out two copies of that debut album before I finally scored a CD of it, and I still have the original today.  In fact, if pushed to list the best albums of the 80's "hair era", I would definitely put this album in the top 10; I think that highly of it.  "Bang Go The Bells", "When The Hammer Swings Down", "The Kid Goes Wild", "Desperate", and a few others from this record are among some of my favorite songs from the era, even to this day.

A second album, Nothing Sacred, was released in 1992, and two more singles charted on metal radio.  Touring grew the band's fan base, and Babylon A.D. looked poised for the big time, but I wasn't as enamored with this record as the debut.  There were still a few good tracks, but the sophomore jinx seemed to have bitten the band as I didn't feel like the album was as focused or as complete.  Still, I figured that they would shake it off and return bigger than ever with album number three.  But then, the one factor that no band had any control over, that no label could foresee, that no management team could head off took over and killed the promising careers of the Babylon A.D.'s of the world; grunge and hard alternative rock wiped the rock n roll landscape clean, leaving only a handful of the biggest bands to stagger around on life support for several years, trying to recapture what was lost.

Babylon A.D. wasn't big enough to try to survive the fallout, like a Bon Jovi or Poison, and hadn't really built up the foreign following of a band like Firehouse or Mr. Big, to be able to try to make a go at it there.  Relegated to small labels, the band released a live album in 1999, and then finally that third studio album in 2000, but American Blitzkrieg wasn't what people were listening to at the time, and quite honestly, the band had shed so much of their previous style and sound that many long-time fans, myself included, found little to truly enjoy on the album.  A cool demo compilation, In The Beginning popped up in 2008, which featured several really good songs that showed how the band got to that debut album stage, and then in 2014, Lost Sessions/Fresno, CA 93, a 4 song EP of previously unreleased material was released, and the three new, post-Nothing Sacred tracks seemed to point to the band going back to that debut sound had then been given the chance to make a record in 1993.  Another live album was released, and I had hope that a new Babylon A.D. record might not be too far off.

That leads us to 2017 and that new album finally will see the light of day.  Revelation Highway is an album of "new" Babylon A.D. material on the king of all band resurrection labels, Frontiers Records.  I say "new" material, because several of these songs are not actually new, but re-recordings of demo material found on In The Beginning.  "Tears", "She Likes To Give It", "Last Time For Love", and "I'm No Good For You" are all old songs given new life here, and the band sounds like it has not missed a beat in the 30 years since they were originally signed.

Of the six new tracks here, all are top notch songs, with no filler cuts added just to round things out to an even ten songs.  Album bookends, opener "Crash And Burn" and closer, "Don't Tell Me Tonight" might be the best of the bunch.  "Crash And Burn" kickstarts the record with blistering, chunky metallic rhythm guitars and pounding drums as it charges down the "open road" that Davis sings about, before a screaming solo from Freschi drops in between chorus sections to liven things up even more, if that's possible.  "Don't Tell Me Tonight" features some of the best, flashiest, screamingest guitar work on the record, along with excellent backing vocals, and a simple, sing-along chorus (think Night Ranger's "Don't Tell Me You Love Me" simple) that will have listeners wailing along instantly.  "Fool On Fire" sounds like it should have been on that debut record and is the track where Davis sounds the most like time has stood still for him.  The more I hear it, the more I feel like it could have been the track that followed "Desperate" on that first album, as it just has a tone and quality that seems to flow right off that record and bleeds into this one.  One listen by anyone familiar with the debut and I am sure they will instantly agree.  While those three tracks could have possibly charted a couple more metal hits for Babylon A.D. back in 1990 or 91, "One Million Miles" is the song here that would have likely had crossover radio and MTV appeal back in the day.  Although not a ballad, this track is highly melodic and filled with some great vocal work, both lead and backing, making "One Million Miles" a melodic rocker that features some cool-yet-more-subtle guitar work, especially in the solo section, that would have likely served the band well on radio, especially with its female fan base.

All five of the original band members are here for Revelation Highway, which adds even more to the overall greatness of this record.  No one sounds as if they have lost anything to my ears.  The guitars are edgy yet melodic, with blazing solos and chunky rhythm sections, Davis' voice, while perhaps a touch lower in register than previously, still has grit, power, and range, and there is a tightness to the band that can only be attained through years of playing together.  I'm not a huge fan of the production on this record, at least on a couple of tracks, but I am hopeful that this is more of an issue for me with this digital preview copy, and that the CD itself will add a bit more brightness to the feel of a few tracks here.  Even with the slight flatness of the tone in a couple of places, I can't help but find myself instantly whisked back to 1989 when I play Revelation Highway, but absolutely in a 100% good way.  The nostalgia comes from the familiarity of the band, not from the songs sounding old, tired, or dated, as this is a lively record from start to finish, with no cobwebs or dust bunnies cluttering up the overall feel.  Easily the best "comeback" record from an 80s/90s band I have heard so far this year, Revelation Highway is in no danger of leaving rotation for me anytime soon.  I absolutely love this record, minor production flaws notwithstanding.

Rating:  Crankable in the extreme!  Turn this sucker UP to 9!

Posted by arttieTHE1manparty at 9:04 PM