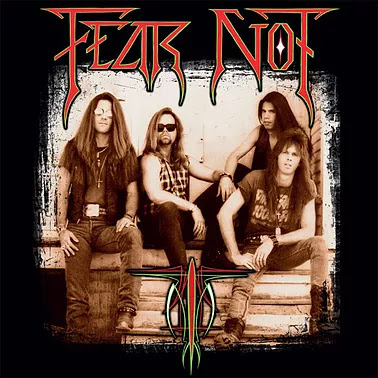 It's been nearly 25 years since Fear Not's only album was released, so Roxx Records felt the time was right to dust it off, give it a bit of a facelift (both in looks and sound), and repackage the album with two additional recordings featuring Larry Worley on vocals.  Originally released in 1993 on Word Records/Pakaderm Records, Fear Not's only album is something of a collector's item, particularly for those who not only seek out Christian hard rock, but ANY 80s/early 90s hard rock of seriously high quality.  Often compared to bands like Skid Row, largely due to a similarity between Worley's vocal style and that of Sebastian Bach, as well as the hard, crunchy guitars of Chris Howell, Fear Not performed a high energy, edgy type of hard rock that would have been huge had it been released about 4 years earlier.  Unfortunately, much like just about EVERYONE from the 80s/early 90s hard rock scene, Fear Not was swept away in the grunge tsunami, and there was never a follow-up to this excellent release.

Not only has the music been given a remastering job, the cover artwork has also been updated.  Doing away with the "floweriness" of the original, and changing the style of the band's logo, artist Scott Waters has give the album an appearance that is more in line with the band's sound.  I never understood why the original looked like something out of a hippie's dream, and I have to say that I think the new look is a definite upgrade!

All of the original songs from the album are included here, with stand-out cuts being the hard rocking "Give It Up", "We Have A God", and "Mad World", which I always felt was one of the strongest tracks on this record, but never got the attention it likely deserved being so near to the end of the record.  Worley and Co. sound particularly Skid-dish here, and there are some BIG drums and a solid bass line to go along with the punchy vocals and Howell's ever-present strong axe presence.  "Mr. Compromise" could also fall into this same relative description, and it has always been near the top of my faves list from the band.  I have also always felt "Till The End Of My Days" was never given the attention it deserved, as it is a truly top-notch power ballad with a great hook, insanely catchy chorus, and a huge, lighters-in-the-air solo from Howell that should have been all over radio and MTV!  Ambiguous enough in its lyrics to not "scare off" non-Christians, "Till The End Of My Days" could've been the slow dance of so many proms, homecomings and weddings all those years ago had it come out just a smidgen earlier.  Seriously, it is strong enough that it more than holds its own with the "I Remember You's" and "I'll Be There For You's" of the era...in fact, I prefer it to both of those songs.  Of course, for many people the big "hit" of the record was the mid-tempo rocker, "Suicide Sunshine", which has never sounded better than it does here, what with the sonic upgrades in the remastering provided by Rob Colwell.  Led in by a guitar line that is very reminiscent of the intro to "We All Die Young" by the fictitious band, Steel Dragon, from the movie Rock Star., "Suicide Sunshine" has such an infectious chorus, some nice, stacked backing vocals, and just a killer, killer drum sound that its a shame more people didn't get the chance to hear it back in the day.   The original album's closer, "Take Hold" is still a really cool acoustic number, as well, although I will admit that with the two new tracks tagged onto this reissue, it sounds a bit out of place now.  Still, a great song is a great song, and I'm glad that the tracking wasn't altered just to move this to its original closing slot.

As I mentioned, also included here are two new songs, although neither features the full Fear Not line-up.  The first track, "You Got Love" actually appeared on the Liberty N Justice digital album, Life Songs, and features JK Northrup on all the instruments, including a really cool guitar solo about mid-way through the track.  I loved this song when I first heard it on the LnJ release, and I am extremely glad that it is included here, as well.   "Love Is Alright" is a new song that is exclusive to this 25th Anniversary collection, which is pretty cool.  Worley not only tackles the vocals here, he is also the "band" on this track, with the exception of drums, which were provided by Stan Mayo.  This track is a bit rawer, a bit grittier than anything else on the record, and it has a bit of a demo feel to it, to be honest, but it gives the track a bit of a "live in the studio" feel, which is kinda cool.  Slightly more modern in its take, "Love Is Alright" is a nice way to show that Worley, if not Fear Not in its entirety, is still making music and moving forward.

I do wonder a bit why the remake of "We Have A God" from Liberty N Justice's 4-All...The Best Of LnJ, wasn't included, unless it was due to issues getting the other artists on the track to allow it to be used here.  On the other hand, the song is already here in its original form, so perhaps its simply a matter of repetition and redundancy.  Just the way my brain works, folks...

Mine is a digital preview copy, so I do not know what the inserts will look like (other than the cover), but I will update this review when I get my physical copy.  However, I am certain that, like other Roxx Records products, this will be a top-notch release with a full booklet with photos, lyrics, credits, etc.

Rating:  The original was an 8 in my book, and things have only gotten better.  Crank this nice package up to an 8.5, and save yourself some cash by tracking this new release down.  With a print run of just 500, it's likely going to be as hard...or HARDER...to find as the original!