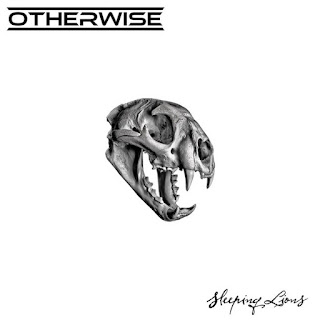 When last we checked in with the boys from Vegas, they had just debuted Carboney and Medeiros as members of the band....and had apparently forgotten to pay their electric bill, as they dropped an acoustic EP on us, called From The Roots, Vol. 1.  Since then, the guys have plugged their instruments back in, amped things back up, and they return with their first album of all new material since 2014.

The band comes charging hard right from the start, with lead single, "Angry Heart" which features some rather dark lyrics and equally dark guitar riffs, along with some really solid bass work from Carboney.  I feel like this song...and this album, really...features some of the best bass work to date from the band, and I can't help but feel that Mr. Carboney has really helped to shape the sound of the band in the short time he has been with Otherwise.  Not something that is often said about a bassist, I realize.  Anyway...  The title track is a pretty cool song that received a rather intriguing co-write (in my opinion), as the band called upon Korn's Jonathan Davis to lend some lyrical ideas.  As you might guess with Davis contributing, this is a pretty angry song, and there are hints of Korn-styled lyrical phrasing, but the song remains distinctly Otherwise, particularly as Adrian's vocals soar through the chorus, rising above the screams in the background.  I have always been a fan of Adrian's vocal, and he does nothing to diminish that on this record.  There is also a wickedly cool guitar solo leading into the last chorus here that shows Ryan to be his brother's equal, even if they utilize different instruments.

"Suffer" is a different type of track for Otherwise to tackle, as it is not really all that aggressive, and there is a distinct pop element to the uptempo number.  Taking a considerably more melodic slant than the opening two tracks, "Suffer" is actually very catchy, with an infectious chorus, and I would imagine this track will find itself being pushed as a single at some point.

"Nothing To Me" heads back into more aggressive territory, with some big drums and a hard-driving riff from Ryan that plows through a stop-start-stop-start rhythm coming out of the first chorus.  The edge slips back into Adrian's vocals here, and I keep finding myself coming back to this track as one of the best on the record.  Of course, the same can be said for the next track, "Weapons", with it's electronic effects bleeding into a piano intro that eventually gives way to a slightly discordant guitar, with the whole band jumping into an aggressive-yet-melodic track that has an easy chorus that Adrian can really cut loose on.  Again, a very easy track to fall in love with, and one that I can't help but feel will be pushed to radio in the near future.

Not content to stick with the tried and true, Otherwise mixes things up a bit with songs like "Crocodile Tears", which utilizes a distinct vocal pattern unlike anything else on the record, bordering on spoken-word styling on parts of the verses, with some powerful bass work and solid drums bolstering a heavy-but-not-fast chorus section.  Quirky and catchy at the same time, "Crocodile Tears" is another of my faves on this record.  On the other end of the spectrum, "Bloodline Lullaby" could be considered something of an "alt-metal power ballad", reminding me of similarly styled tracks that have worked so well for other bands in the past, with Skillet coming immediately to mind.  I don't recall Otherwise really testing the waters of this style of ballad, but it works here, especially with Adrian's command of the emotional elements at play here.  I feel like this could be the breakout song of the record if it is given any kind of push at all.

The packaging here is excellent, with a full, 20-page booklet, complete with all lyrics, writing and production credits, thank yous, and some pretty cool artwork, as well as a band photo and some artistically enhanced head shots of each member.  While it is a digipack, at least it isn't one of those crappy, flimsy slipcases that have become the norm for so many bands these days.

Definitely the band's most complete album, and their most interesting, it might not have the big, stand-out tracks like "Soldiers" or "Darker Side Of The Moon", but I feel it is the album that is going to stick with listeners.  Intricate and detailed in places, blazing with anger in others, Sleeping Lions pretty much runs the gamut for the band musically, with hard, crunchy numbers and even a couple of mellower, more laid back moment.  Strong production, some interesting co-writes, and the best musical performance in the band's catalog make Sleeping Lions a mid-to-late year sleeper to crack many Top 10 lists.

Rating:  Crankable, no question, let these Sleeping Lions roar at 7.5!

Back To Reviews Index
Posted by arttieTHE1manparty at 7:17 PM