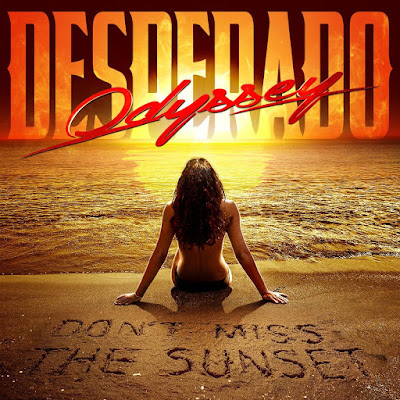 Ah, the Greeks.  Gotta love the Greeks and their strong love for that smooth, polished AOR sound, which they seem to do as well as just about any other country.  Odyssey Desperado is the latest project from Greece to grace us with their updated interpretation of 80s American, guitar-driven AOR, but they do it better than most, including many of the American bands trying to do the same thing, and they make it sound so smooth and effortless!  Combining an obvious love for 80s AOR (and movie soundtracks, in my opinion...but more on that in a bit...), with a passion for tight modern production and high level musicianship, guitarist Odysseas Karapolitis has finally managed to find the right voices...both lead and backing...and supporting instrumentation to bring to life an album that has been in the making since 2014.

The album sets its melodic rocking tone right from the start with "Rush Of The Wave".  Starting off with some background "ahhs" from, I'm assuming, Paul Laine, and a wave of keyboards, the song builds into a mid-tempo rocker complete with some modest tempo changes, solid rhythm guitar playing, and a short burst of speed in Odysseas' first solo of the record.  While a good song, to be sure, it's on the album's second track, "You And Me Against The World" that the overall feel and style of the record is really established.  A catchy hook, a driving tempo, and gritty-yet-melodic vocals from Manos Fatsis, serve to lay the foundation for this top-notch melodic rock record.

"Cruisin'" is laid back perfection with exquisitely smooth guitar tones from Odyseseas gliding across the pulsing rhythms of Katsionis' bass and what I have to assume are programmed drums (no drummer is credited here).  Not really a ballad, this mid-tempo number has an excellent solo...moody and soulful...and some of the best vocals on the entire album.  perfectly fitting with the summer scene being painted throughout the track.  What I want to know is who is playing the uncredited saxophone on the outro of the song, as this adds another dimension to an already great song and I love the feel that it adds.  A great track, "Cruisin'" drips with memories of the sun-soaked summers of my youth spent driving around the seemingly endless highways and backroads that I grew up on.

"Dreams Die Hard" adds an edge back into the band's sound on a track that feels like it would have fit well into an action scene in an 80s movie, much like those used in Rocky IV (go check out "No Easy Way Out" for an example), or even King Kobra's contribution to Iron Eagle.  This is just such a cool song with a great feel, and the soaring guitars, whether on the intro, the outro, or during the solo, are truly great stuff to hear.  Fatsis sounds powerful and confident here, and the strength of the songwriting really shines through.

The piano-based ballad, "Can't Live Without You", slows things down considerably and gives Fatsis a chance to really shine.  His powerful tenor is showcased on this emotional track, and Katsionis' talent at the keyboard is put on full display, as well.  Nicely layered backing vocals compliment Fatsis when the drums and guitars kick in at about the 2:30 mark, and Odysseas' emotive solo is spot-on here.  Excellent stuff here, and one of the more complete sounding ballads I have heard in some time, combining just enough power...and leaving off just enough sugar coating...to not come off as sappy or overwrought, despite the emotion Fatsis pours into his vocals.

I'm not a fan of the what passed for 80s futuristic sounding keyboards that are used to intro "Oasis "In The Desert Of Your Soul)", and while they are quickly shaken off, the overall feel of this song is a bit too cliched for me to really get into it.  Not necessarily a skipper, but definitely more of a filler track than most here, "Oasis" slips in a nice guitar solo, but it isn't enough to overcome the saccharine-sounding chorus or the atmospheric, tinkling keyboards dropped into the middle of the track for no apparent reason.

"Holding Onto A Dream" rights the 80s AOR ship nicely, again really grabbing hold of that movie soundtrack quality that seems to be so prevalent on this album, and just absolutely running with it.  I'd never heard the song before, obviously, yet there was a part of me that felt so nostalgically drawn to this track, like it was dragging me back to a cherished part of my teen-aged years filled with gymnasium dances and late night street cruising.  It is perhaps this, even more than all of his obvious skill on guitar, that is the true greatness of Odysseas on this record; that ability to connect the listener with another time and place in their life through powerful songwriting.  To me, this is a true gift and one that I appreciate time and time again on Don't Miss The Sunset.

"Fragile" continues in this nostalgic vein, but in an even edgier, grittier guitar rocker that is one of the best tracks on an album full of great tunes.  Oddyseas' guitar carries an attitude all the way through this rocker, and Fatsis' vocals take on a similar, urgent-feel edge that helps to drive the overall feel of this track.  Yes, the keys are still there, but they are a purely supporting instrument here, and the drums, whether programmed or live, have a tempo and pattern that just keeps the song pushing forward, never slowing, never wavering, just driving hard to the finish that finally finds the band backing off, letting a few keyboard notes and a final line from Fatsis close things out.

"Tomorrow You'll Be Gone" is another excellent rocker, but one that carries a bit more of a modern take on the classic AOR sound, very similar to the approach taken by recent faves, Romeo Riot.  Great backing vocals supporting strong leads, pounding drums propping up supportive keys, throbbing bass laying the bedrock for searing fretwork...pure melodic hard rock greatness!  Again, a song that I find myself compelled to repeat multiple times whenever I pop this album in, much like its predecessor, "Fragile".

Album closer, "Wings Of Silk" is a big, epic sounding track, packed with power and emotion, with Fatsis utilizing something of a Coverdale approach to his vocals, gliding across the guitars in a manner that reminds me of what Def Leppard did at the beginning of "Too Late For Love".  Unlike Lep's track, however, "Wings Of Silk" remains firmly in power ballad territory from start to finish, with Odysseas' guitar screaming to life one final time on the album in an emotive solo that, for me, was all too short and could have easily stretched out for another 15 to 20 seconds without even coming across as remotely bloated or self-serving.  I also have to say I like the way the song is allowed to just conclude, to just come to an end, without the band feeling like it needs to be given some massive, fading-outro send-off, and without the band just drawing the track out endlessly.  Its a nice capping to an overall great album.

If I had any complaints at all, it would likely be the heavy accent on the vocals of Fatsis in places.  It's not a big issue, and it isn't always prevalent, but there are places where the simple fact that I notice the accent pulls me away from the overall song for a moment, which is a bit of a distraction.  This was especially true when I first received the album for review, however, after repeated listens, I notice it less and less, and as I said, it is a minor complaint now.

The production is excellent here, with nice brightness and polish, as most really good AOR has, but not coming at the expense of the guitars or rhythm section.  The keys aren't overly dominant (thank you!), and the backing vocals are overall very strong, which is to be expected from a vocalist as talented as Paul Laine.  Just a really, really good album from start to finish, and I wouldn't be surprised if Don't Miss The Sunset is right there contending for a spot on the "Best of 2018" lists of many review sites at the end of the year.

More AOR than fellow Greeks Silked & Stained, less keyboard-reliant than Wild Rose, Odyssey Desperado is something of a hybrid of the two bands, stylistically. Makes me want to get over to that big island to check out the rest of the music scene if everyone is this talented!  Regardless, hopefully we will hear more from Odyssey Desperado in the not-so-distant future.  While Don't Miss The Sunset is definitely an album worth waiting to hear, I'd rather it not take four years between efforts from this project, especially if they are always going to be of this high quality!

Rating:  Definitely a cranker...Odyssey Desperado gets an 8.5 from me!