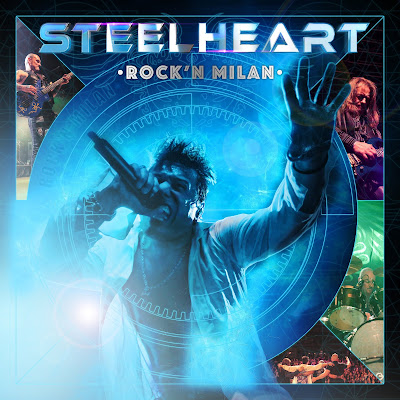 Steelheart is the latest Frontiers Records band to have a live recording released this year, as Dokken, LA Guns, Unruly Child, and Mr. Big have all seen live efforts pressed to CD in 2018, with both LA Guns and Mr. Big having also been recorded in Milan (Dokken's was a 2016 show).  However, unlike the other 80s bands on this list, Steelheart is down to just a single member from its original form, that being inimitable vocalist, Miljenko Matijevic, although both Humbert (2006) and Jones (2007) have been in the band for over a decade, and are credited as playing here, but I have also read that it is actually Marten Andersen on bass for this show and Joe Pessia playing lead and rhythm guitars, so I am not 100% sure of who is playing as I write this...but I know damn well that Miljenko is singing!

The album, as near as I can tell, is a sequential recording of the band's live set played at Frontiers Records' annual festival, and is identical to the DVD in terms of track order, with just a single omission from the DVD.  As such, the album starts off with some crowd noise as Miljenko intros the show with a 2+ minute long reading of a Jim Morrison (Doors) quote, which he reads over the top of some drums, before the album actually kicks off with "Blood Pollution".  As is so often the case with intros, this one is NOT a separate track, so you either have to listen to the dang thing every time you put the album on, or you have to fast forward through it, which is a pain in the butt.  PLEASE STOP DOING THIS, PEOPLE!  Anyway...

"Blood Pollution" gets the audience whipped into a frenzy right off the bat as Miljenko cuts loose on that big scream of his after a rather intense build up of drums.  Easily one of the band's hardest-hitting tracks, Miljenko is able to showcase his still fabulous range right off the bat, as he moves from the gruffer, huskier lower range of the verses to the bigger, higher ends on some of the chorus sections.  And, of course, there's that scream!  Without much of a pause at all between tracks, another Steel Dragon track follows next, with the thumping "Livin' The Life" bursting forward next.  Personally, I don't know why this song was included (much more on that in a moment), as it was not a big cut on the soundtrack, but whatever; the song rocks pretty hard and the band sounds like they are having fun with it, although there is some muddiness to the mix here that blurs the sound of the bass and the drums a bit, which is bothersome.  The guitars are nice and up front on these first two tracks, and Miljenko sounds fantastic, which is really no surprise.

A couple of debut album cuts follow things up, with "Gimme Gimme" really drawing a response from the crowd, and the energy on these two tracks is seriously high.  I was a bit concerned that this may fall off a bit, as Miljenko chooses to drop a brand new song into the set at this point, but he made a wise decision in choosing the sassy "My Dirty Girl", which has an excellent groove to it that the crowd seems to have eaten up in this live setting.  This is one of my three or four favorite tracks off the latest Steelheart effort, Through Worlds of Stardust, which manages to successfully blend a bit of the melodic hair metal from the 80s and a more 70s bluesy, classic rock sound.  If you haven't picked up ...Stardust yet because of the less-than-great earlier 2000s output by the band, wait no longer; ...Stardust is well worth seeking out.

A piano-free version of "She's Gone" is up next (Miljenko plays the piano, so no idea why it wasn't utilized at this show), and the vocalist absolutely shines here, really laying some powerful emotion into this overlooked power ballad.  "Cabernet" from the not-so-great Wait album is up next, and to my ears, it sticks out like a sore thumb.  I can absolutely guarantee there is no way this song...or any song from Wait, would have been in my top 15 choices for this album, but I wasn't consulted.  To be fair, I also wouldn't have included the drum solo that follows, but I have a feeling this is as much about giving Miljenko's voice a break as anything.  I guess the solo shows Humbert's skills off well enough, but I don't like drum solos when I am at a concert, and I can guarantee I skip them (if possible) on live albums.

Fan favorite "Everybody Loves Eileen" is up next, and the band threatens to go into serious jam mode here, as the track stretches to more than nine minutes in this live setting, which is pretty cool, honestly.  The guitar work here is excellent, but again, some production issues really mar the performance for me, as there is just too much bass fuzziness overall.  Even turning my subwoofers down doesn't seem to help a whole lot, which is unfortunate.  The band then blasts off into the driving, "Rock N Roll (I Just Wanna)", before Miljenko slows things way down...and tunes his voice way up...for the band's massive hit, "I'll Never Let You Go (Angel Eyes)".  If there is one thing about this live record that really surprised me, it was the fact that I don't think Miljenko missed a single one of those rafter-scraping high wails on this track, even nearly 30 years after it was recorded.  It is astonishing to me to hear him still so powerful and so rangy all these years later, especially when coupled with the fact the guy nearly died several years back.  "We All Die Young" from the Rockstar soundtrack closes things out for the evening, with Miljenko sounding like he could go another 10 rounds vocally, and the band sounding incredibly tight and energetic down to the last note of the evening.

My biggest complaint about this record is actually song selection (although I will also address the production issues in a moment).  Unsurprisingly, six of the 12 cuts here come from the band's huge debut album, while just one song is chosen to represent band's newest album, Through Worlds of Stardust, although "My Dirty Girl" is a really, really good song.  What IS surprising is that while its cool to have the two main Steel Dragon tracks (1 and 12) from Rockstar included, I can't for the life of me understand why absolutely nothing from their 1992 sophomore album, Tangled In Reins, is included here.  Where is "Sticky Side Up", "Late For The Party", the band's namesake song, "Steelheart", or "All Your Love"?  To me, while not as much of a hit on radio and MTV, this album surpasses the greatness of the debut due to overall better songwriting.  Why Miljenko chose to ignore that record in favor of tracks like "Cabernet" from the seriously disappointing Wait album, or the good-but-not-great Steel Dragon track, "Living The Life"...or a drum solo, for crying out loud...is beyond me.  Even on the DVD, the song that was chosen to be cut from the CD listing was another song from Wait ("Live To Die").  I don't get it; there has to be a legal reason for ignoring Tangled...  And if I could complain about the set list just a tiny bit more, adding "Love Ain't Easy" and "Can't Stop Me Loving You" from the debut would have made more sense than the three oddities I listed.

While Miljenko sounds great and still possesses a maddening range, vocally, the overall sound of the album is lacking.  It sounds like it was recorded from microphones rather than directly through the mixing board, giving some parts a rather muddy sound, especially on the bottom end.  This is unfortunate because the one time I did see this band live, they were excellent and sounded great!

Sadly, guitarist Kenny Kanowski would pass away just a few short months after the recording of this show, and I can't help but wonder if that is the reason this live recording is seeing the light of day, as sort of a tribute to the man. As such, it would have been nice to have a guitar solo section put in, replacing the drum solo, perhaps.  I can't help but wonder if maybe this show was never intended to be released, which could explain the subpar recording.

In the interest of full disclosure, I have not watched the DVD and have no real plans to do so.

Rating:  Rock this at 6, with the lower score owing to sub-par production and an odd set list that completely omits several great tracks from their second album.

Back To Reviews Index
Posted by arttieTHE1manparty at 11:36 PM