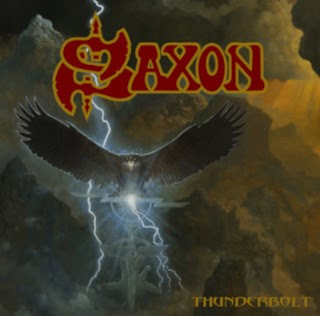 2019 will be the 40th anniversary of the release of Saxon's debut album, Saxon, believe it or not.  Long considered one of the true heavy metal bands, and one of the leaders of the New Wave of British Heavy Metal (NWoBHM), the band has no plans on calling it a day, as is evidenced by this, their 22nd studio effort, Thunderbolt.  With founding members Byford and Quinn...and drummer, Glockler (1981-present)...still manning their stations, the Saxon machine rolls on and are in fine form here.  Joining these stalwarts are other long-time members, Nibbs Carter who has handled the bass for the past 30 years, and Doug Scarratt, whose guitars have been a part of the Saxon sound for 22 years. so to say this is a steady line-up would be an understatement, especially when compared to the musical chairs rotation of so many bands today.

Thunderbolt starts off with an intro, "Olympus Rising", and without rehashing my general disdain for intros, let me just say that this intro is basically just a guitar and drums for much of the track, with the bass and some uncredited (I'm assuming) synthesized symphonic elements that leads straight into the title track, the straight forward assault of "Thunderbolt".  From the outset, it is obvious that Glockler's drums are going to be a commanding force on this track (and throughout the album, it turns out), and Byford's vocals are still strong for the most part, although age does seem to have impacted the singer's pipes, particularly on the screams.  However, rather than detract from the sound, I feel like this aging has added a bit of character to the vocals, a bit of a rasp edging its way into the powerful, lower-range tenor.  The guitars are sharp and work well together, with a crisp solo ripping its way through the middle of the song, and the bass is a steady factor throughout.  A great way to start, in my opinion.

The popular metal subject, Icarus, makes his presence known once again in "The Secret Of Flight".  Byford's vocals are, once again, strong, and he doesn't tackle the higher range on this track, preferring to stay comfortably in mid-range.  Again, guitar work is a highlight here, as Quinn and Scarratt take turns on lead axe throughout a dueling solo section.  I'm also drawn to the vocal harmonies here which spread throughout the chorus section, and even on the verses.  I'm assuming these harmony vocals are just layers of Byford, as no one else is credited as singing backing tracks here, but it makes little difference, as the effect is a powerful one.  A staggered galloping style is utilized by Glockler here, which when accompanied by the bass of Carter, really drives this track.  I'm liking what I hear on this song to a considerable degree.

"Nosferatu (The Vampire's Waltz)" is up next, and, not trying to be a nit-picker here, but it isn't really a waltz.  Sorry if that ruins things for people.  Sure, PARTS of it hold a waltz pattern, but most of it does not.  There are some excellent symphonic parts here, however, and I dig the change in tempo that sets the guitar solo section apart from the rest of the track.  Once again, Byford's vocals are such a focal point here, and he is in fine story-teller's mode on this one.

"They Played Rock And Roll" is a high-speed rocker, which is to be expected as the track is a tribute to the legendary Motorhead.  It's fun to hear Carter's bass so out front on this song, much the way Lemmy's bass was usually mixed, and the drums are fast and furious throughout the track.  Lemmy, himself, is sampled into the track just before a ripping guitar solo blazes across the drums and bass, and you can almost hear "Ace Of Spades" in the melody coming out of the solo.  Its a good, fun track that is a fitting tribute to Motorhead and Byford's friend, Lemmy.

"Predator" is a bit slower, but every bit as heavy, with growled harmony vocals mirroring everything Byford sings on the first verse and chorus, which is a pretty cool effect.  Then, the two voices trade lines in the second verse, before once again sharing the chorus section that gives way to a smooth, soaring guitar section that finds Quinn and Scarratt harmonizing together, a la Iron Maiden, for a bit, before the twin voices return for the last section.  Not my favorite track here, but I like the artistic attempt from a band that shows that it is not so set in their ways as to not try new things.

"Sons Of Odin" slows things down a bit, with Carter providing a deep, thrumming bass line that is the main instrument through the verse sections, accompanied only by occasional power chord riffs and some rock solid drums.  Following the first chorus, there is more of a rhythm guitar presence felt, but it is still Carter's bass that remains firmly present.  Once again, some really nicely done harmony vocals are added to Byford's main track, and Byford does unleash one high-pitched scream, although it is not particularly long in duration.  "A Wizard's Tale" is only slightly faster in temp as Byford sings a song about Merlin and Camelot, but tracks like "Sniper" and the aptly-titled "Speed Merchants" do more than their fair share to keep the pace lively in the second half of the album.  The guitar work in both is sharp and clean, and the rhythm sections are tight and powerful.

The autobiographical track, "Roadie's Song" closes things out here, with the tempting chorus of "16 beds inside a bus/Step inside, be one of us" making me wonder what stories could be told by these guys who have traveled the highways and byways of the world together for more than 20 years (with Byford, Quinn, and Glockler standing side-by-side-by-side for more than 35 years!).  Its a catchy track, designed more for the band and their long-time fans than for anything else, but the performances are still strong, particularly the guitars, and Byford sings the song like he's telling a story, which is what the man has done so well for so many years. A great close to a really, really good record.

The production is excellent here, which I was a bit worried about with Saxon finding themselves on such a small, unknown label.  But, as should be obvious by the breakdown above, the instruments are all given spots to shine, and everyone's contributions can be felt throughout the record.  No complaints here.

I don't hesitate in saying that Thunderbolt is the best Saxon record in a decade, probably going back to 2007's, Inner Sanctum record.  While it is not going to replace Wheels Of Steel or Denim And Leather...or the polarizing-yet-personal favorite, Innocence Is No Excuse...or some of the other classic metal albums that Saxon released in the early 80s, there is no reason long-time fans should turn away from Thunderbolt, like many did from 2011's Call To Arms, which was distinctly less metal than this record.  I see no reason to not put Thunderbolt firmly in the top 10 albums of the band's catalog, and perhaps could even make a case for slotting it in the top 7 or 8, which is saying something after 40 years and 22 records!

Rating:  Even after all these years, Saxon is still crankable!  Give this one an 8!

Back To Reviews Index
Posted by arttieTHE1manparty at 4:19 PM