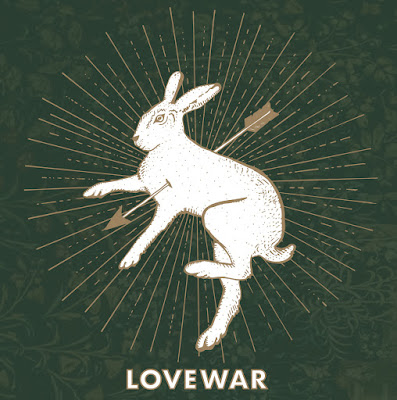 No need to check your calendar, as, yes, it is still 2019.  And, yes, you did read the title to this review correctly.  Lovewar has reformed to release a new album more than 25 years after their one true album, 1993's Soak Your Brain.  To some this has become an annoying trend, but for me, the resurgence of old bands who are releasing new material years...sometimes decades...after their last record is an amazing thing!  It not only gives me new music to feast my ears upon, but it also drives me to revisit some of those bands and albums of my youth that have been collecting dust on a shelf.

Things kick off with Purlee's drums before a chunky, down-tuned guitar riff roars from Bushong's guitar on this mid-tempo rocker, only to back off into a quieter, funkier riff during the verse sections.  Here, we get our first listen to Bushong's vocals in more than 25 years...and it was worth the wait!  As a 23 year old, "faster and louder is better" metalhead, I couldn't fully appreciate Bushong's approach, but now, I get what he is doing and definitely like his style and approach.  The edgy guitar crunch returns on the chorus sections which feature some excellent layered harmony vocals from Purlee and Armstrong, whose bass is not only heard but felt throughout this track, mixed perfectly so as to be given a voice without becoming overbearing.  We also get to hear the first solo run from Bushong on guitar, and it is apparent the amount of talent this band has when it is all put together into one musical pot.  Good stuff to open with.

The tempo picks up...and the music lightens up a bit...on the next track, "Stand Under It".  I'd definitely say this is one of the two or three best songs on an album with no real filler material.  Again, those vocal harmonies are a joy to hear, and the tight rhythm section of Armstrong and Purlee really gives Bushong a solid footing on which he can not only run vocally, but also with a guitar solo that has that 60s Hendrix tone to it.

"Upside Your Face" is another hard rocker with a funky attitude, and it is here that the first comparison to 80s/early 90s King's X is likely to be drawn, although there are nods to Extreme here, as well, though there is nothing even remotely close to a rip-off on this record.  Armstrong is given a chance to really let his bass work here and he does not pass up on the opportunity, nor does Bushong on his solo section.  Purlee, likewise, makes his presence known, with plenty of tasty fill work, especially during the guitar solo, where the cymbals spring forth almost like they are part of that solo.  Another song that falls into that top three or four songs category for me.

The album's lead single is the funky rocker, "Candle", which features a quirky, jangly guitar riff running the course of the track, along with interspersed harder-edged guitar riffs, giving the song a unique sound that is definitely not something that is part of the current musical landscape.  (And we are all being robbed of so much great music because of this...)  Bushong's vocals are a bit deeper than they were a couple of decades ago, a bit more weathered, but he still sounds strong, like a cross between Gary Cherone and Dug Pinnick.  Armstrong's bass is given plenty of room to rumble on this track, and Purlee's drum patterns are every bit the match for the varying guitar approaches utilized here.  Check the video below to get a feel for what you are going to experience here.

There is a definite musical continuity running between this album and Soak Your Brain, which is largely the result of the fact that these songs were reportedly written as the follow-up album way back when.  That being said, I think the lyrics have been updated to fit a more current time.  As an example, the song "Grain Of Salt"features these great lyrics...

"So much tolerance/Can't seem to tolerate...
So much violence/Makes me wanna hate.
Too many genders/Clutter up the view...
Too many lawsuits/Make me wanna sue!"

While nothing here likely jumps out at the casual listener as being out of time, when you consider these songs were written 20+ years ago, the "more than two genders" thing wasn't an issue in the 1990s or even early 2000s.  Regardless, when you hear the band's layered harmony vocals on this, and several other tracks, as well as their musicianship, it becomes very easy to understand why the trio is frequently compared to King's X.  And while that is understandable, it is also unfortunate, for King's X clones, Lovewar is not.  Personally, I far prefer Bushong's vocals, and I think Armstrong's bass, which is featured prominently throughout this record, is a bigger overall instrument than it is on several King's X records.  But again, this isn't about comparing bands and saying "this band is better than that band".  No, this is about a group of guys that came together, seemingly out of nowhere, to reform a band and say, "yeah, let's do this one more time".

"Tuxedo Alligator" is a picture of a wry smile painted with musical brushes, with liberal doses of blues, funk, and rock all smattered across the canvas.  The riffs are chunky and gritty in places, daring Bushong to unleash his guitar, but the funky bass line and generally laid back, lounge-esque drum patterns reign things in, creating a musical tension that is pure ear candy.

"One-Trick Pony" starts off with an acoustic guitar section that eventually morphs into a Zeppelin-styled riff that is soon swept over by the band's layered, Extreme-styled chorus, which actually precedes the first verse.  This song is dang-near hypnotic, and I found myself returning to it over and over, drawn in not only by the instrumentation, but also Bushong's angrier approach to his vocals, particularly on the bridge section where he screams...

"The world is dying/And we are crying, and shaking and bawling and roaring and
barking to the dogs!"

...or something close to that; there are no lyrics included with my preview copy, and his angry snarl is a bit hard to make out in this section.  The longest song on the album, there's a lot to take in here, and all of it is good.  Probably my favorite track on this album.

"House Of Cards" takes on a groove-heavy Enuff  Z'Nuff quality musically, with tight harmony vocals and an infectious melody that sets it apart from some of the other tracks here.  The guitar solo is exceptional, with Bushong using two different styled effects on specific parts of the solo break, alternating between a smoother, 60s-rock sound and a slightly edgier, grittier sound.

"Up For a Fight" starts off with heavy, dark tones, before moving into more friendly-sounding territory.  Again, highly catchy, especially on the main guitar riff that carves its way through the track, and the layering of the vocals add a depth that is just absolute perfection to these ears.  This anti-politics song...at least the current state of politics...is really, really well done, and would have been the perfect close to a really solid return.  But Lovewar isn't quite done yet.

"You" is another Zeppelin-meets-King's X track, especially in the guitar riffs that open the track, while the Extreme qualities of the song jump out at you in the pitch-perfect harmony vocals, the added percussion instrumentation, and the thick vibe that runs throughout.  All three men are equal parts of the whole here, and if "One Trick Pony" isn't the best of the batch, "You" probably is.  "You" has an extended instrumental section to exit the song, but does so without feeling like it breaks down into a jam band session, and when the final guitar note rings out, you find yourself waiting for the next track to kick in because you simple don't want the record to be done!

The production is very good here, which is essential when you are dealing with a band that has as much musical talent, quality, and depth as a band like Lovewar.  Top notch songwriting, excellent musical performances, and gorgeous vocal work...from lead vocals to those exquisite harmony vocals...all lead to an amazing return for Lovewar.

Now...if we can only convince them to not wait 25 or so years before the next album comes out...

Rating:  A strong return for the band, crank this to 8.

Back To Reviews Index
Posted by arttieTHE1manparty at 5:03 PM