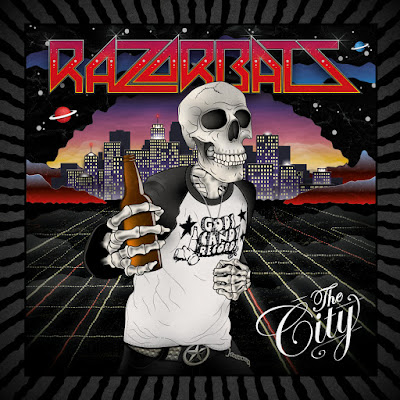 The best rock band going in Norway today...at least in my opinion...Razorbats return in 2019 with their half of a soon-to-be-released split EP (Canada's Sick Things will be on the other half) from Rob Mules Records.  This split EP will be the first new material from the band since last year's excellent II record, and the first recorded material with new drummer, Torris Ilievski.

The lead single as far as the Norwegians go is "The City".  Kicking off with a fat bass line and gritty rhythm guitars, the song is a musical adventure for the protagonist who, after a hard night of drinking, finds himself struggling with a case of "room spinning 'round" hangover-induced paranoia, thinking that "spies everywhere" are out to get him.  As is typical with Razorbats songs, a healthy appreciation for classic rock is spread liberally across the single, while elements of sleaze and punk are drizzled into the mix.  Big, gang vocals back up Vercouteren on the chorus sections, and a cool little solo from Wevling is the perfect fit for this fun, uptempo rocker that picks up right where the band's II album left off last year.  Incidentally, Ilievski is a great fit for the band with his approach to the drums, not merely keeping a steady tempo, but adding some interesting rhythms and fills throughout the track.  Welcome aboard, Torris!

If you want to take a listen, check out "The City" right here!

The B-side, "Summer Of Head" is another catchy rocker, a bit more in the 70s punk vein, and considerably raunchier in its lyrical approach.  Kicking off with a guitar riff that snags your attention, the song is nostalgic in its "looking back at a summer of fun" style, "Summer..." drives hard from start to finish, with Vercouteren sounding exceedingly confident on vocals, and the twin guitars of Wevling and Tangen constantly on the attack.  I appreciate the mix on this record, also, as Hervig's bass is given plenty of attention, enhancing the bottom end of the track, keeping it bouncing along.  The guitar solo is a bit more melodic than one might expect to find in a punky/sleazy track such as this, but Wevling makes it work perfectly.  Definitely "B-side" material...not because of  lack of quality, but because of the subject matter...this song will likely find its way into many rockers' summer backyard party mixes, and deservedly so.

Irreverent, infectious, and staring right at you with a knowing smile, Razorbats make the most of their half of this split EP, and I hope that this is merely a precursor to more great music coming from the band later this year.  Be sure to stop by the band's site to grab your swag, music, and to keep up with all that is going on in Razorbats' world! Canada's Sick Things are a band that I knew nothing about prior to receiving this EP, although this will not be their first release.  The band had previously released a full digital album through the Bandcamp platform in 2018, which you can find here.

The lead single from this split EP will be "Stranglehold" (not Nugent's classic track), which will drop in May, along with a video release.  Much like their EP partners, Sick Things plays a 70s inspired hard rock style, but rather than going for the revved-up, punkish approach Razorbats utilizes, Sick Things goes more for a smoother, guitar rock sound, a la Boston, Blue Oyster Cult, or The Who.  Turin has something of an early Joe Elliott quality to his voice, minus a bit of the snarly edge the Leppard singer would employ on their first three albums.  The sound here is thick, with a rich guitar tone, with a lot of bass in the mix, giving the music a bottom-heavy sound.  The backing vocals get a tad bit lost in the mix, as does the early part of the guitar solo on this track, but the overall vibe of the song is a cool one, with handclaps joining the fray following the lead guitar solo, and the final couple of runs through the chorus are really strong.  I'm liking what I hear.

"You Know It Ain't Right!" stays the mid-tempo rock classic rock course, even dropping some cowbell into the mix.  The chorus vocals remind me a lot of early...EARLY...Def Leppard (think On Through The Night, not Hysteria), while the guitars retain that early Boston, B.O.C. sound.  The drums are straight forward and steady, and once again, the bass is a big presence in the mix for Sick Things. I find myself really liking the vocal approach of Turin, as he stays comfortably in mid-tenor range, adding a bit of edge when necessary, but never ranging into a scream or into falsetto territory.  I also really like the guitar work here, with the rhythm guitars hitting particularly hard in their three-chord rock style, and the solo grabs your attention without becoming overly flashy or over-the-top.  Gonzalez is a competent stickman, again not overly flashy or disruptive, and he capably handles the drum approach of the era and style of music this band seems to enjoy.

If I had any complaint about the music from Sick Things on this EP it would be that it sounds a bit muddy, a tad bit over-modulated, especially on the vocals, which I think is likely due to how much bass is utilized here.  The lead vocals seem like they have the volume pushed up a bit too much, which gives them a fuzzy quality, and the backing vocals get buried a bit from time to time.  I have no production credits in my notes, but I'm wondering if this is a self-produced effort.  Now, take all of this with a grain of salt as I am listening to digital versions of these tracks at present, and it is entirely possible this is not an issue on the actual, physical EP.

Both bands put their best foot forward here, with Razorbats doing Razorbats things...combining a sassy, sneering attitude with high energy, punk-tinged retro party rock, and Sick Things taking a more straight ahead, NWoBHM meets 70s American classic rock approach.  Production styles differ, as well, with Razorbats sticking to the grittier, more live sound that they have employed so well since their breakout with  Camp Rock, while Sick Things use a smoother and somewhat heavier-handed production approach, giving their songs a thicker sound.  It's an interesting pairing of bands on this split 7-inch EP that will be available on vinyl, and one that I find myself enjoying despite their obvious differences.

Rating:  With only two songs per band, it's tough to give a comprehensive rating.  As a whole, I'd crank the project to a 7, with the Razorbats material being a bit stronger and more to my liking, but Sick Things have made a fan out of me and I plan to track down that previous album soon.

Back To Reviews Index
Posted by arttieTHE1manparty at 5:07 PM