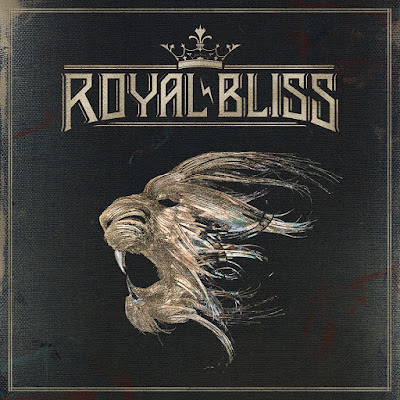 Utah's favorite sons, Royal Bliss, have returned with their first studio effort since their 2016 EP, The Truth, and the band's first full-length release since 2014's Chasing The Sun.  Streamlined to just a four-piece unit this time around, Royal Bliss returns to the modern hard rock sound that served them so well on Chasing The Sun and previous efforts, Waiting Out The Storm and 2009's major label debut, Life In Between.

A couple of these songs have been floated digitally already, with the scorching hard rocker, "Hard And Loud" with it's fist-in-the-air, sing-along chorus, and the catchy mid-tempo number, "Devil With Angel Eyes" receiving national attention.  Meanwhile, "Pain" has just recently been added to several radio stations as well as SiriusXM's Octane channel.  This punchy, angst-packed track is easily one of the two or three best tracks on an overall great album, with lead singer, Neal Middleton, alternating between his smooth tenor delivery and an edgier, raspier scream on the verse sections.  Taylor Richards' guitar screams to life on the solo (which ends all too soon), with both Hennesy and Smith adding to the depth of the track with a rock solid bottom end.  This is the type of track that the band has consistently done so well, a hard-driving, forward-pressing rocker that is musically relentless and lyrically meaningful, angry-yet-hopeful in an "I'll overcome all of this" way, as Middleton snarls on the opening verse, "I am the one, the only one, who writes my story.." then backs it up with a chorus of "Take away my pain, Cuz it won't fade away!  Falling into nothing, I will rise above it all, and take away my pain!"

"Paranoid" starts off rather starkly, with just Middleton and the rhythm guitar, but soon enough the drums kick in and the bass rumbles to life on another mid-tempo-yet-aggressive modern rocker that recalls for me the things that were so great about the past few studio records.  Taylor utilizes a unique guitar tone and style for the solo here which is a complete departure from anything else on the record, but it works well, and Middleton finds himself alternating between his more aggressive style on the chorus and a smoother delivery approach on the verses.

"Adrenaline" is a very bass-heavy, bottom-end-oriented track, but is catchy as heck, with a 90s alternative guitar line that infects the chorus sections, and a stomp-and-nod tempo from Hennesy that keeps the song rumbling along.  As I said, the track is just catchy...infectious might be a better word...and between the steady drum cadence and the throbbing bass line, the listener is just pulled along, engaged the whole way right up to Middleton's cold close on the song.  Good, good stuff here.

"Light Of The Moon" is the "Crazy" of this record, which says something, as I think "Crazy" is still among the best things this band has ever recorded.  The track starts with a slow build, an acoustic guitar line and Middleton's vocals, building, building, building until the chorus hits and Middleton beckons, "Where did you go?  I've been missing/Someone to hold, You don't listen/All my life I'm caught in the Light of the Moon".  Perhaps the greatest thing about Royal Bliss is the way Middleton's vocals add an emotional layer to the songs that serve to enhance the words that are put down on the lyrics sheet, and nowhere is that more evident than here.  You can feel the emotion the words have been marinating in before they are brought to life.

"Be Original", with its stomp-stomp-clap tempo and big "whoa-oh, whoa-oh-oh" vocals, is just pure ear candy.  The modern edge applied to Middleton's vocals sits in contrast to the 70s-inspired guitar tones and Hammond-styled synth work (I don't believe it is a true Hammond organ being used here), and this is a pure rocker through and through, as is the edgy follow-up, "You're Killing Me" which features a huge drum presence and some more inventive, creative guitar tones from Richards.  The instrumental section following the second chorus section is basically controlled musical fury, with the rapid fire drums fighting with Richards' guitars and Hennesy's bass in a struggle for sonic supremacy.

If it's searing guitar solos you are interested in, "How You Like Me Now" is your track.  While I love so much of what Richards has done on this record to this point, both in how he has crafted his solos and the unusual tones and techniques he has experimented with, it is on the solo here, at about the 1:35 mark that his string-bending skills really just come to life in a pure, straight forward manner.  Not tricks, not studio effects, just the man, his pick, and his axe...the way its supposed to be.

"Fight Back" is the most aggressive song that Royal Bliss has recorded to this point in their 20+ year career, at least as far as what I have heard (and I have heard just about everything except their very first recordings).  Jackhammer drum patterns, a near breakdown chug-chug-chug section from the rhythm guitars, more 70s-toned but high speed soloing, and the angriest Middleton vocals you have likely ever heard rip through the last half of this song that leaves the listener asking, "Wait...that was Royal Bliss, right?"  A little punkish...maybe even a bit grungy...this is a Royal Bliss oddity, no doubt, but in a good way, I think it would be interesting to hear the band tear into this in the live setting!

In stark contrast to "Fight Back", the record closes with the acoustic number, "S.W.I.M.U.", which finds the band drifting a bit back toward the softer sound they had adopted on The Truth.  The acronym stands for "Smoking Weed In My Underwear", which while admittedly humorous, has little to do with the depth of the song, which is part of Middleton's (and the band's) continuing musical saga of life on the road and the family that the band is for the guys.  An acoustic steel guitar is thrown into the mix here, adding to that southern-fried, country-tinged rock the band had tinkered with, and it is a great ending to an album that showcases a band in full embrace of who they are and what they want to do, regardless of what others think they should sound like or be about.

Is this the best Royal Bliss record yet?  That is a tall task, especially when considering the greatness of Waiting Out The Storm and Chasing The Sun.  That being said, this is definitely top three for me, and only time will tell where exactly this record finds itself settling.  Just know that this is a great record from an underrated, underappreciated band that deserves far more attention on the national level.

I'm not sure of distribution at this point...it has not appeared on Amazon as of this writing, but you can order the CD here, including autographed copies, along with all sorts of other merchandise and experiences.  The band will be out on the road this summer, and if you get the chance to seek them out (largely in the western half of the country), I encourage you to do so, as they are not only a great live band, but good guys to talk to after the show.

Rating:  Exquisitely crankable!  Rip that knob clear up to 9!

Posted by arttieTHE1manparty at 3:58 PM