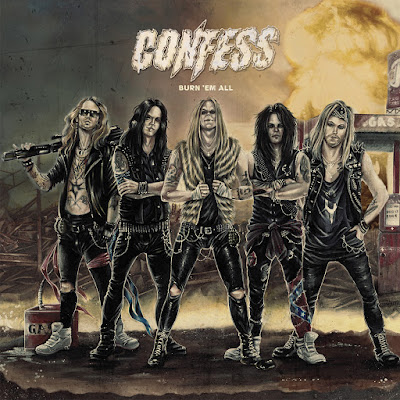 It's been three years...three LONG years...since Swedish sleaze masters, Confess, released an album (Haunters came out in 2017).  That's a long time between albums.  And then, when you consider that it was 2014 when the band put out their debut record, the quasi-classic, Jail, you are looking at a band that had fewer than 25 songs under their belt in roughly 6 years!  That's not really the track record of a big time band, and a lot of times, bands that wait such a long time between the first and third albums never actually get to the third album; the scene has changed, people have moved on, magazines are on to the next big thing, what have you.  I honestly had fallen into that category of people who had moved on.  Sure, like I said, Jail is a borderline classic modern-era sleaze record; not quite in the same category as Crashdiet's Rest In Sleaze, but it's really good.  And Haunters was solid, also, but with such a long layoff between those records, I honestly had kind of forgotten about Confess other than the time or two that I pulled Jail out and thought, "Dang...wonder what happened to these guys!"

Well, what happened is they went back to the drawing board and put together what is probably the best record of their career.  With a change in one guitarist (Pontus is in, Richie is out) and a new bassist (Ludwig in, Van Noice out), the band seems to have returned to a more aggressive sound, throwing more back to the sleazier Jail and steering a bit more away from the more polished hair metal sound of Haunters.  As such, Burn Em All feels like a mixture of the best of both worlds, a perfect combination of a couple of radio ready tracks and a fistful of punch-you-in-the-mouth rockers that hearken back to the days of the seedier side of the Sunset Strip!  Buckle up, sleaze fans, because Burn 'Em All is gonna be a heck of a ride!

The album kicks off in fine fashion with some interesting jungle effects and a big tribal beat from Samuels' drums, accompanied perfectly by Ludwig's bass.  About thirty seconds in, the speed ramps up in a big way and we are plowing headfirst into a punked-up beast of a track, with equal parts sleaze and blood dripping from the steaming strings of the guitars that are absolutely smoked on this track.  The snarl of Elliot's vocals is absolutely perfect for this type of song and he completely commands this track in a way not a lot of singers do these days.

"Malleus" (whatever the heck that means) is up next and virtually nothing has changed from the opener.  The guitars are on full attack, and the bass rumbles very audibly throughout the scorching rocker that features a killer solo, some great backing vocals, and extremely tight, focused drum work from Samuels, who is a masterful player throughout the record.  In places, Elliot sounds like an angrier, throatier Phil Lewis, especially when he is in full-seer-and-spit mode, such as on the first two tracks.

"Welcome Insanity" backs off on the punk-infused sleaze and cleans up pretty nicely on a more radio-friendly rocker that has Elliot sounding considerably smoother and less pissed off than on the hyper-aggressive, full-attack tracks featured on Burn 'Em All.  The guitar solo is almost too aggressive for the rest of the track...almost...but it all works, especially with the great mix on the song.  I have to give serious credit to the production team here, as they managed to put together a great sound for the band throughout the record, whether it's on the superb backing vocals here (not too loud, not buried in the mix), on the great voice given to the bass, or on the excellent sound of the drums.  Hats off in a big way!

"A Beautiful Mind" has one goal in mind and that is simply to cave in the side of your head with blow after blow after blow of this heavy puncher.  Not blistering fast, but crushingly heavy, especially on the bottom end, and fueled by the angst of Elliot's vocals, who snarls directly in you earhole with nasty aggression and attitude, with each verse being kicked off by, "Hey, motherf**ker...!", accentuated by perfectly paired bass and drum work.  It's funny, because after the guitar solo, a vocal bridge chimes in that at first sounds too polished for the rest of the song, but then the buzzsaw guitars come snarling back to life just in time to bleed directly into the next track, the amped-up, "Heresy", which has the band delivering what sounds to me like the band's take on what Motley Crue might sound like in 2020, but with far superior vocals.

The title track blazes through the speakers next, and the full-speed-ahead attitude is firmly in place once again.  Samuels' drums are a freight train headed directly at the listener, and the twin guitar attack of Blomman and Pontus just absolutely attack this vicious rocker.  Elliot's vocal, again, are absolutely perfect for this scorching track, and his voice absolutely reminds me of someone now, but dang if my brain can pluck the name out at this point.  Perhaps it will come to me in time...  While I sort through the thousands of bands I have heard in my time, check out the official video for "Burn 'Em All" for a dose of just how great this new record is...

"Is It Love" is pure ear candy and would have dominated hard rock/metal radio and Headbanger's Ball back in the day.  Elliot's vocals have a melodic quality on a track like this that make you wonder how he's the same guy that is trying to verbally rip your throat out on other tracks!  The addition of some well-placed keys enhances the melodic nature of this song, and the smooth guitar solo is a string bender of the style that is all-too-often forgotten with hard rock bands these days.

"My Vicious Way" doesn't really live up to the "vicious" part of its title, but it's a pretty good song.  If I had to pick one song that I might...MIGHT...leave off, this would be it, and there really isn't a specific reason for it.  If pressed, I would probably say I don't really like the vocal bridge all that much, and the song reminds me of what wasn't really right with Haunters; it didn't really seem to know what it wanted to be.  Not a full-on sleazy rocker, but not a real melodic, hair metal song either, "My Vicious Way" kind of treads musical water for me, but never entices me to hit the skip button.

"509" is a balls-to-the-wall speed fest that just screams from your speakers right from the start, taking a cue from the first couple of cuts from the record.  Again, the twin guitar attack is perfectly executed here, and once again, the rhythm section is just so tight that it is hard to believe that Ludwig and Samuels haven't been playing together since the outset of the band.

"Prominence" sounds straight out of the 80s with its song structure, with the rumbling bass line being the prominent (see what I did there!) instrument supporting the verses, with the guitars jumping into the fray in the build to, and run through, the chorus sections with a really cool solo featured here as well.  I love the vocal approach of the chorus here, again, sounding like its straight from the best stuff that 80s metal had to offer, and the tasty guitar lines that drive the song home are a pure nostalgia trip for me, though the song isn't a specific rip-off of any one band or particular player.  It's just a well-executed song that I hit repeat on fairly frequently.

"One For The Road" closes things out in fine, mid-tempo rock fashion, again combining the best elements of the hard-edged sleaze style and the more melodic hair metal style the band fuses together on this album.  Again, not the best track of the bunch, but more than good enough to replace well-over half of the dreck that crosses my desk in a given year.  Again, not even close to a skipper.

The language is pretty aggressive in a couple of spots, but this is sleaze metal, and not squeaky clean boy band pop. There are a fair number of F*bombs scattered throughout the record...and pounded into your skull on "A Beautiful Mind", but language aside, this is a MONSTER of a record.  Outside of a couple of tracks I might almost consider skipping, there is pretty much nothing to not love here.  I mean, I loved Jail, and I thought Haunters had it's moments, but Burn 'Em All has to be my favorite of the band's trilogy so far.  I guess only time will tell how well the record stands up, but for the here and now, this is a killer record from a band more people really need to discover...even if they are late coming to the game!  Let's just hope that Street Symphonies can get the band to punch out another record in 18 or so months and not make us wait 3 years between albums again!

Rating:  Gotta crank this one to 9, folks!  This record is a beast!

Back To Reviews Index
Posted by arttieTHE1manparty at 8:17 PM