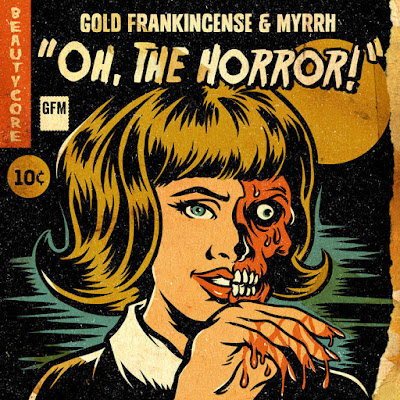 It has been nearly four years since the English sisters (well, they're American sisters named English, so...) released their successful sophomore album, Identity Crisis, on the masses.  (Their 2015 debut EP, Death Of Giants , went largely unnoticed, although four of the six songs were later included on Identity Crisis).  Now, the creators of Beautycore have returned with an EP of six new songs, showing considerable growth not only as musicians, but especially as songwriters.

The EP kicks off with "Give Me A Sign", which has garnered significant airplay on Christian rock stations throughout the country and clocked in as number 20 on ChristianRock.Net's Top 100 songs of 2019.  A fun punk/metal hybrid, the song is insanely catchy and really shows an increased strength in the clean vocals from CJ, who also rips through some impressive rhythm guitar lines on the song.  Big backing "whoa" vocals add some depth to the track, and Lulu's impressive skills behind the kit really drive this rocker that features almost exclusively clean vocals.

"The Other Side", by contrast, is a lot darker vocally, with Maggie's harsh growls rather staggering to hear coming from the young lady, and standing as a bipolar opposite of the sweet sounds of CJ's voice.  Thick bass chords are a  prominent part of the track, and again, some fiercely aggressive rhythm playing from CJ pushes the more metallic attitude here.

Next up is "R.I.P.", a fun, punkish song that has to be a blast in the live setting, as fans shout along to the song's title in the chorus.  Co-written by Josiah Prince of Disciple, this song likely won't be released as a single, which is a shame, because it really is a catchy tune.  Featuring another really strong bass presence, especially at the beginning, this song also sports some fairly sparse musical sections, especially on the pre-chorus sections, allowing for the contrasting vocals of CJ and Maggie to take more center stage.
If you have ever seen the girls in their cheerleading stage outfits, they are even more appropriate with this song, as there are a couple of sections where the girls chant along (with some additional crowd help), sounding like a high school cheer squad.

"Never Again" is a more metallic track that has seen recent airplay as a single, and as with so many songs from the trio, the interplay between CJ's (and some of Maggie's) clean vocals and Maggie's harsh screaming growl really drive the song and set it apart from so many other songs on Christian rock radio today.  A strong message of independence and personal belief in oneself, "Never Again" stands as kind of the antithesis of their last album's title, Identity Crisis, as CJ declares, "I am stronger now/I will stand my ground/I won't apologize for who I am!"  The stop-start chugging of the rhythm guitars and bass are punishing, and Lulu's aggressive drumming really pushes the song forward.  Definitely more "core" than a few of the tracks here, there is a brief, pummeling breakdown here and power chords galore as the girls prove they have the musical chops to stand with the boys of the genre.

"On The Inside" is the "radio" song of the batch, with a softer...slightly softer...approach, with the majority of the vocals handled in a cleaner fashion.  Yes, Maggie tears loose with a growl at the onset of the song, but by and large, this is the most melodic of the headbangers on the record.  That doesn't mean the music is less intense, the chords any less powerful, the drums any duller.  But there is definitely a catchiness, a melodic sensibility that the other songs don't really call for that "On The Inside" brings to the table.  Check out the video below and see if you can't detect what I'm talking about.


The EP closes with the latest single, "Can You Promise Me That This Will Never End", which may be the longest song title I have typed since my days in radio when I had to type "If I Said You Had A Beautiful Body (Would You Hold It Against Me)" by the Bellamy Brothers.  Hey!  Maybe it's a sibling thing.  Okay...of course it isn't.  Anyway, long song title aside, this is a great way to wrap up this impressive EP.  The song starts off with some effects before those meaty rhythm guitars hit and the cymbals crash to announce the arrival of the girls.  As is pretty typical on this effort, CJ handles the vast majority of the clean vocals, although Maggie does drop in some clean harmony vox as well, but her vocal presence is most felt when she snarls her lines in a manner that would likely make Angela Gossard (Arch Enemy) grin.  Lulu does enough double kicking here that it sounds like she's running on her kit, and she has some really interesting patterns she chooses to use before the final run through the chorus.

To be honest, complaints about this effort are very few, as everything works really well, from the cool cover art to the perfectly executed track listing.  If I had any complaint, it would really be only that the album is just too short and leaves me wanting more!  None of the six songs here top 3:40 in length, and half of them don't even get to three minutes, so the entire EP sits at around 18 minutes.  But it's a really, really fun, interesting, aggressive, and entertaining 18 minutes.

I have never found this EP in the physical format, so as far as I am aware, digital is the only way you can get Oh, The Horror!  Frustratig, to be sure, but I just downloaded the EP (along with the girls' acoustic EP) and burned it so I could take Oh, The Horror! with me on the road.  Available on Amazon and iTunes (and probably just about any other digital store you care to shop), this is definitely a piece of the modern hard rock/metal scene that is worth the download.

As good as Identity Crisis is, Oh, The Horror! tops it in nearly every way!  All that's missing is a softer moment like "Chatter In The Room" from IC.  There seems to be nothing that will stand in the way of these talented, ambitious young women who have certainly raised the bar...and some eyebrows...in the hard music industry, both Christian and secular.  Color me impressed!

Rating:  Very definitely crankable!  Dial this up to an 8!  I only wish it were a bit longer!

Posted by arttieTHE1manparty at 9:06 PM