RENEE KEEL with RON KEEL "Anything But Pink" (Book Review) 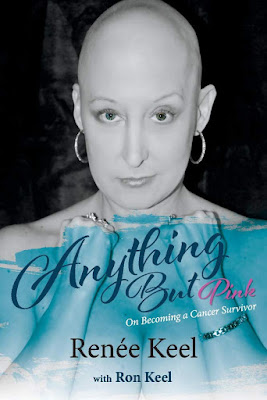 I had the good fortune to meet Renee Keel when she accompanied Ron to perform at SkullFest in 2014.  My observation of Renee was that she was a quiet partner, herself an observer of the adoration people had for her husband.  She was polite and cordial, yet reserved and soft-spoken, minding Ron's merchandise table while he was performing or meeting with fans.  She was not a groupie, not some big-haired, loud-mouthed character bragging of her exploits with this star or that.  She was real.  As the book says of her, "Renee lives in Sioux Falls, SD with her Rockstar husband, and is proud to bring a touch of analytical order to his artistic chaos."  To be honest, I could sense that.  And while  I cannot say that I got to "know" Renee, I was glad for the opportunity to meet her, as she added a sense of reality to the crazy "Rockstar World" many envision their favorite artists to live in.

Just two years later, Renee would be diagnosed with breast cancer, and her world, as well as the world of her famous husband, would be "rocked".  Rather than cave to her diagnosis, however, Renee chose to fight cancer, and to share her fight with whomever chose to follow along, as she started a blog about what she and Ron were going through.

Now, that blog has been put together, along with insights from Ron on what he was going through, in book form.  Anything But Pink: On Becoming a Cancer Survivor is an in-depth look at one woman's fight against the dreaded "C" word, both the highs and lows, the somewhat humorous moments, and the tear-inducing moments.  Also included are insights from Ron, who went into his own version of "fight mode", determined to "liquidate most of my primary assets...down to every last $5 autographed 8 x 10 photo I can sell" to help finance his wife's fight.  Making the fight even harder was the fact that Renee lost her job, and Ron saw his hours at a radio station drastically cut, as well.  But rather than shrink from the fight, the couple faced the battle head on, with both leaning on each other as they worked through shock, fear, and despair in the face of an enemy that attacks seemingly at random and without notice.

Maintaining the flow and structure of the blog, the book is easy to read...at least from a stylistic point of view.  There were several times I had to put the book down, as the descriptions of what Renee was going through hit a bit close to home, as I recognized similarities to the cancer fight my own father-in-law had gone through just a few years prior to Renee's.  To most anyone who has dealt with cancer, or who has had someone close to them go through the battle of their life, Anything But Pink may prove to be a very tough read, to be sure, but I feel nearly everyone would agree that the story contained in these pages is 100% honest and 100% real.

It wasn't until I finished the book that I really understood what Ron was singing about on his newest album, Fight Like A Band.  In fact, I always wondered why the first verse wasn't even using the words "Fight Like A Band".  Now I understand, as after reading the book, I have come to understand the title track is very autobiographical, with that first verse being a miniaturized version of Renee's battle.  About his wife, Ron sings...

"When the doctors came in, And gave her the news,
She cried, and she smiled, And she did what she had to...
Tough as nails, and stronger than I've ever been!

Shake your fist, Make your plans,
Use what you got and do what you can.
If you're gonna take on the world...
Fight Like a Girl!"

But this book isn't about Ron, at least directly.  This book is about Renee and her fight, with Ron being a supporting character to her story.  Sure, his status in the hard rock and metal world will draw some to the book that may not have otherwise picked it up, but Renee's story stands on its own.  It needs...no, it DESERVES to be read, because it is a story that could end up being about anyone at anytime.  As such, hers is a story of survival, of hope, of courage, and of dogged determination to fight the battle on her own terms.

Not a Rock N Roll story, but definitely a story that will rock you, Anything But Pink is a powerful book with a powerful message.  Pick it up at Amazon, Barnes & Noble, BookBaby, or Renee's own site, ReneeKeel.com

Back To Sleazy Readers
Home
Posted by arttieTHE1manparty at 5:33 PM