SAVED BY SKARLET "Out Of Darkness" 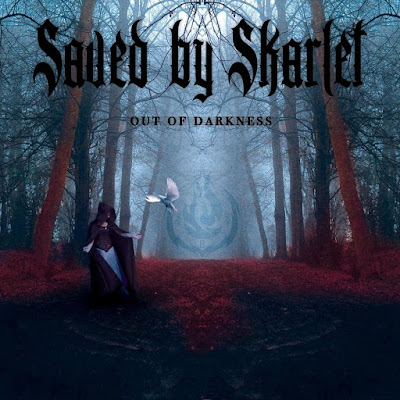 Saved By Skarlet is a four-piece, metalcore-influenced band from Rhode Island.  Built around brothers Matthew and Nathan Middleton, the band has experimented with a couple of different line-ups before putting together the current band and releasing Out Of Darkness, their debut album.  A couple of previously released singles are included on the album, along with 8 new tracks that range from pretty straight forward metalcore to more melodic, progressive tracks, all of which work to varying degrees.  What does work throughout, regardless of style, is the band's commitment to being a Christian band whose faith is on display through the lyrics to each of the ten tracks on this album.

The disc starts off with...well, with "Intro", a spoken-word track with some electronic elements (including synthesized strings), a church bell, and some rather progressive guitar work.  This sub-minute long track stands in pretty stark comparison to "Feel The Enemy", the first true song on the album.  Musically, the song is a hard-hitting, core-based track, with some excellent rhythm guitar work and tight drumming, along with some great screams and an excellent breakdown section.  The lead, clean vocals are a bit emo in style and sound, and it took me a couple of listens to really wrap my head around how they fit into the mix here, as this is a pretty heavy track otherwise.  Definitely not the norm for fans of pure metalcore, but plenty of musical meat here to chew on, along with some solid lyrics about fighting against the internal desire to sin and fighting against the enemy that inspires those thoughts and desires.

The title track, "Out Of Darkness" follows, and again, we have a pretty aggressive, largely metalcore track, although the band incorporates several programmed elements into this song, along with some higher pitched screams and some of the harshest vocals that Nate lays down.  His clean vocals, again, are fairly emo in nature, but nothing that detracts from the overall quality of the work here.  Once again, the rhythm guitars are particularly strong, and the drum work is solid.  It reminds me of something Nine Lashes might have done in their harder-edged moments.  Two true tracks in, I have to say I am rather impressed with this self-recorded, self-produced effort.

Next up is one of the most diverse songs on the album, musically.  Originally released as a stand-alone single in 2017, the band re-packaged "Conquerors" for this album and re-released it as a single, and it is now climbing the ChristianRock.Net charts.  I say it is diverse because there are some solid guitar leads thrown into the mix under the verse sections, pairing with the pretty fierce rhythm guitars to give the track a solid foundation.  Again, some programmed elements and reverb are thrown into the mix, especially on the vocals in the chorus sections, but overall this track relies on the traditional instrumentation to drive the song.  Featuring a cool opening riff and some nice percussive moments, "Conquerors" is one of the strongest songs on the album, despite the fact that there are no real harsh vocals used here, outside of a couple of screams at the end of certain vocal lines.  I have to assume this is the reason Andrews isn't in the video; either that, or he wasn't in the band when the video was made.  There is a pretty vicious breakdown in this song, also, which I really like, but there is always going to be that part of me that really wishes that there would be a screaming guitar solo ripping through the section, as well.  Inspired by Romans 8:37-39, the song is about being more than just conquerors through the strength of Christ.  Check out the band's self-produced video below.


The band slows things down considerably for "Surrender All", with a piano playing a prominent role in the musical presentation here.  The cleaner vocal style that Nate uses on the album works better in this environment than in other places, but the music is almost too "pretty" for this record, with programmed strings joining the piano after the first chorus, which is also when the guitars and drums finally join the mix.  Later, a female voice is added to the background vocals, and there are several big "whoa-oh-ohs" thrown in for good measure, creating a really big-feeling song.  To me, the song steers pretty hard into praise and worship territory, which isn't a bad thing, but again, it really doesn't fit what the band has done up to this point.  Even the very brief snarl that Nate throws into his voice at the end of the one of the chorus sections doesn't do anything to change the overall feel of this song.  All this to say I would NOT cut the song, as I think it is a very impressive composition and it is performed really well, but I WOULD move it to the end of the album where I think it wouldn't feel like such a shock to the system.

"When I'm Cold" is up next, and if I'm being 100% honest, I skip this track pretty much every time it comes up, and that is due completely to the first verse and run through the chorus.  I just can't do it, which is actually too bad, because from that point on, the song really has some excellent work, especially on guitar.  There's actually a pretty cool (albeit short) guitar solo, and the leads are some of the best on the record.  The backing vocals are great, the chimes used in the percussion section are a great touch, and the writing is really, really good.  I just can't get through the starkness of the first verse.  The keys used sound almost off key to my ear, which, in turn, make the lead vocals (Matt tackles that task this time around) sound off and nasal, and I just have to hit skip, at least in my truck.  When I am at home and can actually fast forward through the song without the threat of swerving off the road, then I really, really like the last two-thirds of the song.  I hope that perhaps the band will consider rewriting this song and including it in a follow-up album at some point.

Following the sound of a heart monitor, "Come Alive" picks the tempo back up, with some really good drum patterns and some more really solid guitar leads.  Electric piano is used as a supporting instrument on this track, and it is put to good use.  All the vocals on this track are of the clean variety, and the heart monitor exits the song in much the same manner that it introduced it.  Not an overly memorable song, musically, but a good read lyrically, with a solid message.  I don't skip it, but "Come Alive" isn't a song I would steer people toward to understand who Saved By Skarlet is.

The same can be said for "Light It Up", although this track has some really great guitar work...right before the quasi-rap section!!!  Starting off with a definite dirty blues riff, then morphing into a hard-driving modern rocker, this song is all over the place stylistically, but I have to admit it is kind of fun!  I'm betting the guys had a blast with this song, which features the most prominent bass sound on the record, and I would imagine that this is a fun song in the live setting.

"Fire Inside" trends back toward the metalcore sound the band used on the first handful of songs, which is where the band is definitely at their most consistent.  Aggressive, with a heavy, chunky breakdown, and those strong rhythm guitars...and surprising leads, this is what I think Saved By Skarlet should really focus on.  In fact, if they were to bring in more of their harsher, core-styled vocals, this would possibly be my favorite track on the album, as it is really tight musically.  One thing that bugs me, however, is how much quieter this song is than any other song on the record, which is almost certainly a product of the guys doing this record almost completely on their own, with no label backing or professional producer at the helm.  Another example of a song that I hope the band gives new life to on a later release.

"The Syndrome" closes things out in excellent fashion, as Saved By Skarlet is hitting on all cylinders here.  Harsh vocals, punishing rhythm guitars, tight, machine-gun drumming, a crunching breakdown, and some interesting programmed elements all mix together to create a song that I hit repeat on nearly every time through.  This...THIS...is what Saved By Skarlet needs to be, in my opinion!  Brutal beauty that I think most any metalcore fan will be able to grab hold of and rattle their brain to!  Please, give me more music of this intensity in the future!

In the end, this is a pretty solid debut and a decent album overall, with several strong songs.  Spiritually, the band is on-point, and musically they have a feel for what they are trying to accomplish, although there are a few times I think they attempt to get to proggy and not core-ish enough.  In blunt truth, this would make a great EP, as I would lop off the intro, "When I'm Cold", and "Come Alive", ratcheting things down to 6 really solid core-based tracks, with "Surrender All" tagged on to close things out.  I hope that in the future the guys stick to the more core-ish style...especially with the harsher vocal approach they use in "The Syndrome"...and stay away from the cleaner, more emo-styled stuff.  The harsh vocals, gritty guitars, and savage breakdowns are the meat of this band's sound, in my opinion, and the more emo-oriented vocals and song styles don't do the band justice.  I also hope that there is some way these guys can get with a professional mixer and producer, to help level things out and smooth out a couple of rough edges.  I think there is a good deal of potential here, no question.

Be sure to check the band out on Facebook, and head over to CDBaby to get this album from the guys.

Rating:  Rock this debut effort at 6.5, with the expectation of some bigger things to come!