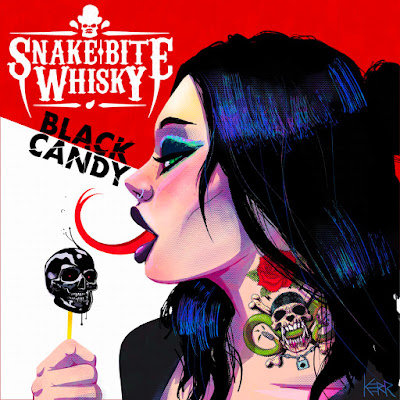 (c) 2021 Sliptrick Records
Jay R--Vocals
Laggy--Guitars
Stacii Blake--Bass
Dan "Sharkz" Weldon--Drums
Australia's Snake Bite Whisky is not a band for the feint of heart, to be sure.  Combining an updated take on sleaze metal with a heavy dose of punk, a dash of Outlaw country, and chaser of grunge, Snake Bite Whisky is unlike any band that has crossed my desk in recent memory.  Gritty, snotty, grimy, and dripping with sleaze and sludge, Snake Bite Whisky may look like they could have ran the streets of Hollywood in 1988, but it would have been because they were being chased by a dozen cops for publicly unrinating on the fire they had just set to the stage they were playing on!  No, these guys are not Monster Ballad darlings of the video era by any stretch, but they may try to do monstrous things to the bands who were!
From the moment Laggy's guitar screams to life on "Thunderbird", it is evident these guys are here to kick ass, plain and simple.  Reminiscent of the early, hungry, punkish sleaze of LA Guns, this sub-2:30 scorcher sets the stage for the ten tracks of pure adrenaline-infused, heavy sleaze rock that make up Black Candy.

"Raised In Hell" is up next, and while it dials back the punk just a tinge, the attitude and sneer of the sleaze rock these guys revel in just surges to the forefront even more.  Laggy, the band's new guitar slinger, absolutely shreds on an all-too-short solo and his dirty rhythms chug and churn throughout the track, while Snake Bite Whisky co-founder, Jay R, spits and snarls his way through the verses before getting a bit of help on the gang-shouted chorus sections.  Two tracks in and I'm already looking for Clorox wipes to try to clean the filth that is oozing out of my speakers away so that I can proceed.

As to the Outlaw country?  Well, you need venture no further than track three, "Creep Show" to get your first taste in the form of the vocals on the verse sections of this otherwise full-throttle sleaze punk track.  Particularly noticeable here is the rumbling from the bottom end where Stacii Blake's bass is hard at work, providing a solid foundation for Laggy to absolutely chew his guitar to shreds on the solo, and Sharkz rapid-fire drumming is spot on, as well!  This is a tight, tight band despite the fact that only Jay R and Stacii have been around since the start of the band.  Filthy, nasty, and raunchy, the music here is absolutely in your face and raw, played with an attitude that is just not present in so much of the modern hair/sleaze genre.  Seriously, this is not 1987 Headbanger's Ball-or-radio-ready sleaze, a la LA Guns or Faster Pussycat; this is punch-you-in-the-face-just-to-watch-the-blood-and-snot-leak-from-your-nose type of sleaze that would likely not have been allowed to see the light of day in 1987!  Full throttle and never letting up, "Creep Show" is the kind of song that is going to either completely turn you off of the band or that is going to gear you up to hear what's next.

And what is next?  More of the unexpected, to be honest.  Following a rumbling bass opening, a guitar riff very reminiscent of Guns N Roses churns to the surface, only to be met by lead vocals from Jay R that come in somewhere between Layne Staley of Alice In Chains and Scott Weiland of Stone Temple Pilots...if they were both trying to imitate the lower range of Axl Rose.  Somehow, it works though, and "Choke" is one of those tracks that you seem to keep returning to again and again, even if you aren't 100% sure why.  Laggy again unleashes a frantic fret run before the final verse section, and this rapid fire number just blazes away until it finally burns out.

"Bones In The Fire" is early Alice In Chains worship, from the sludgy tempo to the grungy, down-tuned rhythm guitars, to that previously mentioned Layne Weiland-style of vocals.  Somewhere in the mix, Laggy drops a nifty, sleazy solo upon the unsuspecting listener, but overall, this is more early 90s Seattle than mid-to-late-80s Hollywood, but if you ask the guys, I'm sure that the members of Snake Bite Whisky will tell you they don't really care what you call it because they play what they feel.  For what it's worth, I think "Bones In The Fire" is one of the best tunes on an album that sports more than a couple strong tracks, and I find myself thinking I could go in for a full album of this type of track.

"Reload, Aim, and Kill" picks things right back up into high-speed territory, with more gritty rhythm guitars and thick, heavy bass work before a false ending sets up a straight-up punk rendering of the song's title, while "Sweet Cocaine" comes across as a musically nastier/less accessible narcotics-worshipping cousin of  Buckcherry's "Lit Up" with an even faster tempo and more sleaze and punk than spit and polish.

Lead single "Hammered" follows, again showcasing Stacii Blake's bass kickstarting things before Laggy's rhythm guitars and Jay R's snarling vocals launch themselves upon the track.  You know what, rather than try to explain it to you, I'll just let you check it out for yourself.  So, give yourself about 4 minutes of free time and check out "Hammered" below....  I'll wait for you...

The drum work from Sharkz is on full display on "Dead By Dawn", which also utilizes a decidedly "You Really Got Me" guitar riff throughout the track before giving way to an absolute string-melting solo from Laggy.  The suitably-titled "End Of The Line" closes things out in fine sleaze rock fashion, with Jay R f*bombing his way through the track as Laggy blazes through one last screaming solo, while Blake and Sharkz hoist the whole thing up on their backs and power the track home.  Really a fun way to close out a surprisingly fun listen from start to finish.

The production is as raw and dirty as a band like Snake Bite Whisky would require, but it is an intentional, professional mix and production quality here, not something you would get if you set up a boom box in a bar and listened to the band riff away.  Plenty of life and voice is given to Laggy's guitar, with good reason as the man is an absolute beast in this type of musical setting.  Sharkz and Blake are a formidable rhythm section, and Jay R, despite his Sunset Strip blonde mane, is a spitting, snarling force to be reckoned with on vocals, though admittedly he will not likely be everyone's cup of tea.  The end result is Black Candy, a full-on sleazy/punky blast of heavy rock from Down Under that will have your head banging and your fists pounding from the moment the amps are kicked on.

Rating:  Black Candy is impressively crankable from a band I have never heard of!  Crank this to 7.5!

Posted by arttieTHE1manparty at 3:18 PM