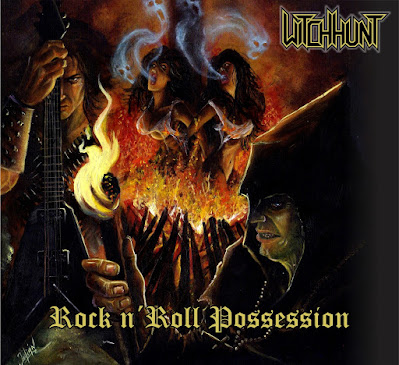 (c)2021 Rata Mutante Records/Dead Center Productions
Luis Sanchez--Lead Vocals
Robinson Rincon--Guitars
Adriana Lizcano--Bass
Jhonathan Martinez--Drums
Hailing from Bogota, Colombia, Witch Hunt is an old school speed/thrash band that wears its 80s musical influences on its denim jacket with pride.  There is little doubt that the basements and garages of these four metalheads were strewn with records and cassettes from Mercyful Fate, Celtic Frost, Slayer, King Diamond, Onslaught, Grim Reaper, and even old-school Helloween...not to mention a worn out copy of Metallica's Kill 'Em All!...as there are pieces of each of these bands stitched together to create this metallic monstrosity of a band that, despite their musical preferences, has only been around in its current form since 2016.
Musically, this is old school speed metal with tinges of thrash throughout the album.  From the opening guitar riffs of "The Inquisitor", it is apparent this band is very tight and very proficient on their instruments.  With only one guitar player credited, I'm assuming Rincon handles both lead and rhythm guitars, and he handles both with exceptional skill.  The rhythm riffing throughout the album is tight and aggressive, and the lead work is strong with flashes of creativity in the solos on a handful of songs, but nothing that is going to be mistaken as overly original or inventive.  Keep in mind, however, that this is music that is all about speed and aggression, and Rincon has that in spades as he runs the frets with deft skill that is truly incredible to hear.  Again, one needs to look no further than "The Inquisitor" to find examples of mind-numblingly fast solo work that finds Rincon using the typical speed metal scale runs to very good effect, showcasing an ability to nimbly run up and down the strings at high rates of speed, but without showcasing any real flash or flair.   This theme is echoed throughout the record in song after song, as speed is the focal point of pretty much every track here. The title track, "Rock N Roll Possession" is another great example where the song structure is solid, and headbangers are going to absolutely snap their necks to this blistering scorcher, but the solo work is rather bland, overall, and the lyrics are pretty cheesy, to be honest.  But hey, this is speed metal, right?  This is pretty much par for the course as far as the speed metal genre has gone throughout the years.

There are a couple of exceptions, however, where the band seemed to spend more time developing the songs creatively, not relying solely on breakneck speed.  Take for example "Demon Hunter".  Yes, speed is a huge factor, and Rincon and drummer Martinez both get the spotlight shone on them as they exhibit bursts of speed that seem superhuman, but there is also a good deal more creativity, not just in the guitar work...with Rincon delivering possibly his most creative solo of the record...but in the overall song structure, which shows tempo changes and subtle shifts in style throughout.  Likewise, the instrumental track, "Iron Pact" shows some impressive work from Rincon, both on rhythms and leads, and bassist Adriana Lizcano gets the chance to step into the spotlight for a bit, as well.  Again, this song is more about musicality and texture than it is about blazing a metallic path through your ears, as this song never moves past mid-tempo but still manages to hold the listener's attention throughout.  Perhaps it should come as no surprise that these two tracks are near the top of my favorites list on the album.

Also vying for favorite status is the oddly-titled "Margaret", a full-force metallic assault that has Kill 'Em All influence dripping from the strings of the rhythm guitars!  Martinez opens the song with massive drum intro, and his double kicks dominate the bottom end of the track throughout.  For the most part, Sanchez reigns himself in on vocals, spending most of the time in the lower, snarled end of his range, although he does rip into a couple of glass-shattering wails that I really and truly could do without, but they don't do enough damage to keep me from really enjoying the old-school attitude and approach of this proto-thrash monster.  I could really find myself getting into an album filled with speed/thrash of this style.  I also find myself drawn to the track "Witch Hunt", with its tempo changes, machine gun drumming, and insanely fast rhythm guitars all supporting the most controlled vocal work that Sanchez puts forth here.  And then there's the NWOBHM influenced "Forces Of The Night" that utilizes some guitar tones on the solo that are not found anywhere else on the record, while also delivering some of the strongest bass lines on the album.  Once again, Sanchez maintains a firm grip on his vocals here, and Rincon delivers a far-above-average guitar solo here that really makes me wish the entire album was crafted the way tracks 5, 6, and 7 were.  These three songs form a back-to-back-to-back stretch that is absolutely punishing and really fun to listen to!

"The Beginning And The End" is an instrumental piece that closes the album proper, and features some haunting guitar from Rincon as a seemingly dark wind blows in the background.  Its a nice piece of music, but it has nothing to do with the rest of the album, stylistically, and I'm not really sure what the point of this couple of minutes is.  Being at the end of the album I don't skip it, I just let it bring the album to a close and move on, plain and simple.

"Justicia y Venganza" is listed as a bonus track and sounds all the world like a demo to me.  The production is considerably different than the rest of the album, and the lyrics are all in Spanish, which was not the case for the bulk of the record.  Upon further research, I discovered this was the very first single recorded by the original version of Witch Hunt, clear back in 2007, hence the sonic differences in the material.  I'm not 100% sure who the band is comprised of at that time, although there seems to be no doubt as to the vocalist, as Sanchez is running pretty free with those King Diamond-esque wails, which I have no use for, and overall this track seems like it was tagged on simply to extend the length of the record, perhaps part of the deal when it was picked up for American distribution.  Not a track I spend any time with, honestly, and if I decided I wanted to burn the CD for personal consumption, I'd honestly give this track the axe and stop at just nine songs.

So, if it sounds like I enjoy Rock N Roll Possession for the most part, that is because I generally do.  I honestly really enjoy a lot of what this band brings to the table, and Rincon and Martinez, in particular, show some real skill on their instruments for playing this type of metal.  There are a couple of weaker tracks here, sure, but there are also stretches of surprisingly good material, as well, particularly on the second half of Rock N Roll Possession.  Overall, there is a lot to like about this record musically.

That being said, whether or not you find yourself enjoying Witch Hunt is going to depend largely upon your tastes, and therefore your tolerance, of Sanchez and his vocals.  Personally, I could never get into the high-pitched wailing of Mercyful Fate or Grim Reaper, even when I found myself impressed with their musical prowess, and a couple of tracks here are borderline ruined by this type of ear-piercing vocal work.  This is going to be key for people seeking out Witch Hunt, as the vocals of Sanchez are all over the place, ranging from snarling, not-quite-death growls to piercing wails that will startle sleeping dogs throughout the neighborhood.  And while the falsetto-screamed vocals are not my thing...at all...I will say that the vocal performance from Sanchez is strong, with seemingly no issues as he moves from style to style and rides the elevator up and down his range.  Likewise, the production on the vocals is very clean, and at no point to I feel like the vocals were buried in the mix or too heavy-handed and out front.

In the end, I was pleasantly surprised by Witch Hunt, and I think a lot of old school metalheads will take an instant liking to this Colombians band.  If you can get past a couple of iffy vocal spots, and you can accept a few speed-over-substance guitar solos, Rock N Roll Possession may be exactly what fans of early speed/thrash metal are looking for.  And while not an album that will ever be a frequent player for me, as I have largely moved on from this style, Witch Hunt has a definite skill and passion for this style that translates into a far more enjoyable listen than I would have ever anticipated.

Rating:  Surprisingly, I found myself cranking this to 7!

Posted by arttieTHE1manparty at 12:37 PM