FICTION SYXX "Ghost Of My Father's Past" 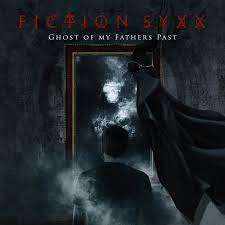 (c) 2021 Independent Release
Mark Allen Lanoue--Vocals, Guitars
JK Northrup--Guitars, Backing Vocals
Eric Ragno--Keys, Piano, Organ
Larry Hart--Bass
Rory Faciane--Drums
When I first heard that Fiction Syxx was set to release their third album in as many years, I was all sorts of excited!  Had the band done what so many others did (or at least attempted to do) during the Covid shut-down, and gotten themselves busy creating new music?  Then I started asking myself if the project would feel rushed as the band felt some kind of pressure to do something with all of the forced downtime so many of us have faced over these past several dark months.  Would the album be all brooding and cold?  Would it come out like some others I have heard, completely overworked, over produced, over...over-EVERYTHING...as the band had so much time to write and re-write and re-edit everything it came out sounding cold and mechanical and sterile?
Turns out, the down time had given my own mind too much time to worry about such things, as Fiction Syxx has unleashed an album for the ages with their newest offering, Ghost Of My Father's Past!
Right from the outset, Fiction Syxx is in top form, with "Bleed For The Truth" bursting forth with the kind of melodic power that has been their calling card ever since Tall, Dark Secrets was unleashed in 2019.  Their sophomore effort, The Alternate Me, upped the ante a bit, adding a bit more punch to their already powerful approach to melodic prog, and "Bleed For The Truth" steps right back up to where the band left off and smacks a home run!  Sweeping guitars from both Lanoue and underrated wizard, JK Northrup, attack your senses almost immediately, but its the power of Lanoue's voice that seems to haunt me when I am listening to this album, even more so than on previous Fiction Syxx records.  Hart is in full-force here, as well, as his bass is solidly present in the mix, as are Faciane's drums.  And while it is a well-documented fact that I think too much keyboard can kill just about any song or album, the expert work from Eric Ragno may be the overly-cliche glue that holds this project together.  All of these elements come together right from the start of Ghost..., which had me instantly hooked.
"Caught Up In The Moment" finds me being exactly that, as this rocker enchants the listener almost instantly!  The Eastern-styled guitar tones (or is it an electric sitar?) are always catchy to my ear, but the performance here is not utilized in the typical way.  Don't imagine a full-blown Zeppelin approach here, as that is not the goal.  Rather, the band uses this unique sound to set the lead guitar apart from the chugging riff of the track and to set up Lanoue's sonic attack as he vocally glides across the atypical guitar bed and powers the song along.  A more traditional sounding, yet oh-so blistering solo run scorches through the midst of this hard-hitting rocker, and two tracks in, it is apparent that Fiction Syxx is operating on a new level, which is saying a lot considering the rare air they had been working in on past albums!  Not willing to settle for what they have done in the past, Fiction Syxx has challenged themselves to take another musical step, and they are obviously challenging listeners to come along for the ride, as the first two songs make it nearly impossible to not wonder what is coming next.
Lead single, "Whispers In The Dark" comes haunting its way in before tribal-sounding drums kick things up a bit and the harmonic guitars spring to life.  Ragno proves he is a master of subtle support on tracks such as this one, as his keyboards offer so much additional life to a track such as this without becoming overly-dominant and distorting the sound of a track such as this one.  This song is pure melodic hard rock ear candy, mid-tempo in pace and blissfully proggy in all the right spots.  Lanoue really allows his voice to soar throughout the track, and Northrup's chilling string bending solo, followed by Lanoue's speedier, crunchier fret run...just...wow.  The chorus is beautifully structured so that you feel the bass and drums pulsing beneath, rather than just being buried.  I truly love this song.  Check it out and see if you agree...
"History Comes Tumbling" continues the power-prog mastery, and the mournful wail of the lead guitars throughout is chilling to hear.  I love the extended guitar solo on this track, and the bass work from Hart is not lost on the listener as it really helps to drive the song and lay that foundation that these soaring, searing guitars layer themselves upon.  Once again, Lanoue proves himself more than capable of handling just about any approach within his range, and the man is a melodic machine in my opinion.  I could listen to Mark sing the phone book, I think.

"Innocence" slows things down to ballad territory for the first time, and Fiction Syxx tackle the track with absolute mastery.  Lanoue varies his vocal delivery here, utilizing a softer approach on some of the verse sections, while also allowing his voice to really take flight on the chorus sections.  Again, Ragno is the master of the backing sounds on keys here, and the song completely sucks you in after just a single listen.  And the real magic of this song?  The writing!  Seriously, there is some thought-provoking stuff going on here...

"Look into the eyes of the children, and lose yourself within their Innocence.
Remember that you were once just like them.
Now blinded by yourself, Society.
Where it's all about me..."
Wow!  Nobody writes like that anymore!  Without beating anyone over the head and telling them HOW to think, "Innocence" implores people to just...well...to just THINK!
"This Place Called Life" comes out nasty and gritty from the word jump, with a dirtier tone to the guitars and some darker supporting sounds from Ragno's keys throbbing through the verse sections.  Doomy, almost Dio-Sabbath-esque here (more on that in a bit), this is a tasty slice of musicality, with the band showcasing an ability to walk on the darker side of prog.  Lanoue adjusts his delivery to fit the track, but never does he drift off into a sullen, sulking approach.  Instead, I imagine a glint in his eye and a sneer on his lips as he powers through the choruses here.  Then, seemingly from nowhere, a brilliant flash of light bursts forth from the darkness in the form of an absolute eruption of a guitar solo, and "This Place Called Life" finds itself fighting for song of the album honors!  Love it, love it, love it!
If "Waiting, Wondering" doesn't have you thinking Dream Theater to at least some extent, I'm not sure we are listening to the same song.  Also borrowing a bit from classic prog masters, Kansas, "Waiting, Wondering" is one of those songs that just seems to draw you in and wrap you in a sonic embrace, completely absorbing you with its melodic mastery.  Lanoue absolutely kills it here, and the keys from Ragno are spot-on superb!  Normally, the ballads on an album aren't really my thing; oh, sure, I've had my lighter in the air at concerts, but I'm typically a harder, heavier song kinda guy.  However, when a song as chock-full of emotion as "Waiting, Wondering" comes on, I definitely take notice!  A brilliant song, to be sure!
Beyond The Shadows" follows "Waiting, Wondering" up in truly stellar fashion, bumping up the tempo to mid-tempo territory, but definitely increasing the musical intensity.  The guitars are absolutely gorgeous here...seriously, someone needs to find out how these guys are wringing this much melodic soul out of their six strings and let the rest of the world know!  The solo is just achingly beautiful as Northrup runs the frets, and Lanoue is once again completely at the top of his game on this track (and the album in its entirety).

"Children Of The Sea" closes things out, and if I am being 100% honest, I was pretty worried about this track.  I mean...Dio-era Sabbath?!  It takes massive balls...and humongous talent...to even think about tackling what is considered by many to be a melodic metal masterpiece.  It turns out my fears were for naught, as Lanoue avoids the guaranteed death sentence of trying to ape RJD, and instead delves into the lower ends of his spectacular range to pull off perhaps the vocal performance of the record!  Yes, there are hints of Dio's snarl here and there, but Mark is Mark to the fullest here, and it is amazing.  The Hammond from Ragno is perfection, and the combination of both acoustic and electric guitars absolutely shines.  Heck, even the percussion is spot-on throughout this true metal classic, and I find myself feeling a bit silly for ever questioning how the band might power through this track.  An absolutely perfect end to a dang-near perfect record!

The production throughout the album is crystal clear, and the separation of the guitars is exquisite, with Lanoue and Northrup both getting a strong voice from their respective instrument.  Huge kudos to Northrup who has shown himself to be a true production wizard through the years, and who possibly outdoes himself here.  This is how a melodic prog metal album should sound, plain and simple.  All you other bands of this ilk...take note.

I'm not really sure what happened, nor is it any of my business, but from what I have been told, the album is no longer available through Melodic Rock Records and can only be obtained directly from the band now by clicking HERE.  Regardless of what hoops you need to jump through, make it a priority of yours to hunt down Ghost Of My Father's Past.  You will NOT be disappointed in any way!

Rating:  Supremely crankable!  I'm giving this one the rare 10 and challenging anyone to try to knock this record from Album of the Year status here at G2G!

Posted by arttieTHE1manparty at 6:51 PM