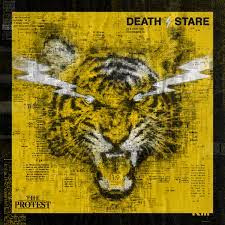 (c) 2021 Rockfest Records
Josh Bramlett--Lead Vocals, Guitars
Adam Sadler--Lead Guitars
TJ Colwell--Rhythm Guitars
Jarob Bramlett--Drums, Percussion
Indiana's The Protest come roaring back with an EP of new material that follows up the band's 2018 Rockfest Records debut, Legacy.  This new release features six new tracks (two have already been released as singles), with five of the six being up-tempo rockers, with the sixth being something of a ballad, although don't expect slow dancing and big-haired power balladry here.
The band picks up right where they left off on Legacy with the ferocious "Paper Tiger", which comes off every bit as heavy and aggressive as the previous album's title track.  Some buzzing guitars intro the track (followed by a tiger's roar), with Jarob dropping a big drum rhythm that sets the song off on a mid-tempo-but-crushingly-heavy track that chugs toward Josh snarling and barking his way through the first verse.  On this song about letting go of the fears that hold us back, Josh does everything in his power to abuse his vocal cords, especially on the seething chorus as he exclaims...
"You're just a paper, paper tiger!
Nothing more than a silver-tongued liar!"
The chorus is packed full of backing shouts and chants, none of which are credited here, but there is a lot of energy packed into this 3 minute...ahem...rockfest!  A solid breakdown is also incorporated in this fun, punchy kick off for Death Stare.
"Greater" has already surged its way up the charts for many Christian rock stations (and some forward-thinking modern rock stations, as well), and is definitely one of my two or three favorite tracks from the band at this point.  Programmed elements lead the churning guitars and drums into the mix, with Josh utilizing a much more controlled vocal style here as he explains to the listener why The Protest does what it does, despite the long hours on the road and the lack of acceptance among their secular peers.
"I don't do it for the money,
Don't do it for the fame,
As long as someone listens, don't care who knows my name.
I don't do it for the glory
Don't do it for the game,
I do it all to make them see that this all for something Greater than me!"
A truly powerful message about self-sacrifice, not only for doing what you love to do, but also doing it for the One who loves you!  The video is a solid performance piece, as well...check it out...
The EP's current single, "Show Up To The Showdown" is up next, and the band takes a bit of a different tack here, utilizing a sparser sound in the verse sections, followed by a big fist-in-the-air chanting chorus, complete with gang-shouted "heys" scattered throughout.  Jarob's drums have a huge presence throughout this track, as does an uncredited bass line on this thick rocker about standing up to the challenges put in your path.  The band recorded a really fun video for this track as well, which can be seen below...

Posted by arttieTHE1manparty at 6:53 PM