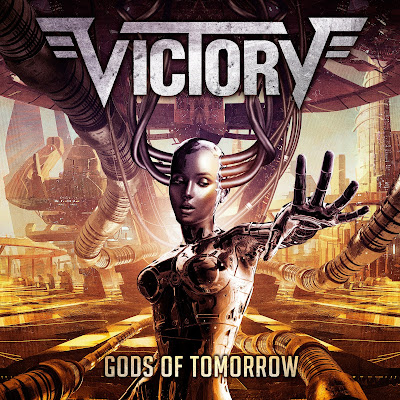 (c) 2021 AFM Records
Gianni Pontillo--Lead Vocals
Herman Frank--Guitars
Mike Pesin--Guitars
Malte Frederik Burkert--Bass
Michael Stein--Drums
As a teen, I was constantly seeking out bands that my friends had never heard, obsessed with amassing a musical catalog that was unparalleled in my small section of the universe.  We are talking about the 1980's, when there were new labels popping up left and right, and new bands showing up all over the place, providing me an endless supply of unheard of hard rock and metal bands.  Then, because of an ad in the back of one of the various metal magazines I read at the time, I made friends with a couple of guys in Europe...through the mail of all things...and I was suddenly awash in even more bands...FOREIGN metal bands that no one here knew of...as we established a pretty intense trading network.
Among the piles of cassettes I received was an album called Don't Get Mad...Get Even! by a German band called Victory.  I thought it was pretty cool, made even more cool by the fact that the founder of the band was originally in Accept, who I had taken a pretty quick liking to, as well.  I wasn't as fond of the US radio single, "The Check's In The Mail" as a lot of people seemed to be, but I liked a lot of the album.  Then Culture Killed The Native came out in '89 (I missed 1987's Hungry Hearts until several years later) and I was hooked in a big way, especially by the vocals of the new lead singer, Fernando Garcia!  To this day, I still pull that CD out and crank "On The Loose", "Don't Tell No Lies", and "Never Satisfied" when I'm hitting my home gym.  Temples Of Gold, You Bought It--You Name It, and Voiceprint all followed, and while I enjoyed each of these albums, none of them caught my ear the way Culture... did.  The band broke up in 1997, only to reunite in 2002 with a basically the original line-up, which meant no Garcia, and the couple of albums Victory released in the 2000's did pretty much nothing for me.  Their last album was 2011's Don't Talk Science, which I found to be a pretty serious disappointment, after which the band announced they were riding off into the sunset.

Now, a full decade since that "last album", Victory resurfaces once again with a brand new line-up and a new album, Gods Of Tomorrow. With Frank the only remaining member, I was very curious as to the sound of the new version of Victory, and as to whether the songs were going to be better than the rather boring material that had appeared on those final few records.

Immediately, it is evident that the new line-up has infused some life into this once great band! "Love Hate" kicks things off with some distant-sounding guitars and percussion elements, slowly building and becoming more prominent, until the song-proper kicks off with a biting guitar riff and huge, thundering drums.  New vocalist, Gianni Pontillo, snarls his way into the mix and I am intrigued.  He is definitely not as rangy as Garcia, but there are definitely some similarities which lead me to believe Pontillo can probably pull off the band's catalog pretty well in a live setting.  His husky, gruff delivery fits the music extremely well on this aggressive track that reeks of the straight-up metal sound of the mid-to-late-80s (don't think hair metal...think early Ratt, Accept, Priest, Leatherwolf, Keel, etc.).  The solo is powerful and sharp, and I have to admit to being very taken by the drums from Stein, which have a really big sound and are delivered in tight, aggressive patterns.  One track in, and I am sold on this new Victory!

The album's title track is up next, and the band does not let up one bit.  In fact, "Gods Of Tomorrow" is even harder, faster, and crunchier than the lead-in track, and the solo here is exceptional!  After several listens, Pontillo's voice really sounds to me like a combination of Garcia and Les Carlson of Bloodgood fame, with that aggressive snarl firmly in place, a pretty solid range, and enough character that he doesn't sound like a cookie-cutter frontman.  I was pretty skeptical, to be honest, as the guys brought in on the last few Victory albums really didn't do much for me (although, to be fair, the songs really weren't there, in my opinion).  The twin guitars give this track (and the album) a complete, full sound, and Burkert's bass really gets a chance to be heard here, which is a bonus.  I dig this track a lot, and  I could listen to an album of this type of high-intensity classic metal pretty much any time!

"Cut To The Bone" continues in that classic 80s metal vein, although there is more of a hard rock element here, as the guitars aren't quite as aggressive as on the first two tracks.  Don't fret, my friends, as this is still a really good track, with the Carlson vocal comparison for Pontillo really coming across strong on this track as the vocalist keeps his range a bit more in the middle-lower end.  Still a great song with another blistering guitar solo that makes me really wonder if Frank was struggling with a burnout that a decade away from recording as Victory has really helped him recover from.  Not my favorite track on the record, but still a great song to my ears.

Things slow down for the first time with "Dying In Your Arms", and this is where I am completely sold on this record (and we're only 1/3 of the way through).  Not quite a ballad, but definitely slower in tempo, "Dying In Your Arms" is a huge song with a killer riff, a big, power solo that will have lighters thrust into the air almost immediately, and some of the best vocals on the record.  This song would have been all over 1987 radio and MTV, right next to Whitesnake and bands of similar heft and melodic sensibilities.  Again, more hard rock than actual metal, this is a great song, regardless of the decade, and is one that I hit repeat on numerous times.

"Hold On To Me" ups the tempo once again, and those hard-charging twin guitars kick things back into gear.  Some big backing "whoa-oh-ohs" support the bridge between the verses and the chorus, and Pontillo uses a bit more range here...not glass-shattering, but climbing his range...while still retaining that snarl that works so well for him and this style of music.  By this point, this iteration of Victory has established a comfort zone that fluctuates between punchy hard rock (such as this track) and classic metal, and they deliver in a big way.  This is a total sing along song that will have fans chanting along almost instantly with fists and horns thrust in the air.   Big, big arena rocker here with a solid, heavy bottom end and a catchy rhythm.

The more metallic edge returns for a couple of songs with "Into The Light" and "Mad". While both utilize a heavier, more "metal" approach, "Mad" is the heavier of the two despite being more mid-tempo than "Into The Light".  "Mad" comes churning out...well...rather angrily, with crunchy guitar riffs and plodding drums, and the seething intensity doesn't let up throughout the song's entirety.  Even Pontillo's vocals take on a bit of a darker tone, carrying that Les Carlson vibe I mentioned before, and "Mad" sounds a lot like something Bloodgood would have done on their last effort, which is a great thing!  The chorus has some great backing vocals and has a big, sweeping feel, which serves to set off the verse sections exceedingly well.

From here on out, it is pretty much anthem after anthem, all of them ranging from really good to excellent!  "Unconditional Love", despite its name, is a searing rocker with one of the fastest tempos on the entire album.  Charging straight ahead from the get-go, this track definitely has that classic Victory feel to it, and the tempo shift in the pre-chorus section screams of something that would have slipped easily onto Culture Killed The Native or Temples Of Gold.  "My Own Desire" holds that same high-intensity drive, as well, with some smoking guitar licks helping to intro the track as the rhythm guitar grinds across the punchy drums.  These two track back-to-back are an excellent representation of what Gods Of Tomorrow is all about!

The rest of the album holds its own with everything that came before, which I will admit I was concerned about with 13 tracks.  Generally speaking, if a band is able to keep my attention past 10, its a really solid record.  That there are no tracks I would give the axe on Gods... says something to me!  "On Fire" blazes forth with yet another screaming guitar solo and fist-in-the-air chant-along chorus that I truly hope the band interjects into any live set they have in the coming years.  I really dig this track!  "In Rock We Trust" (not a Y&T song) packs a punch in a big way with its snarling verses and big, shout along chorus, all bolstered by yet another scorching guitar solo.  Album closer, "Leave You Alone" is also one of the absolute best here, with a cool bass line pulsating throughout the track, and Pontillo spending much of the track in the lower fringes of his range on this story song that drips with 80s nostalgia, teasing you with the edgier, more metallic guitar tones but staying comfortably in the hard rock vein with the multi-layered chorus and the show-stealing guitar solo that may be the absolute best on an album chock full of string-benders!

The songs here are all structured for maximum listening pleasure, it would seem, built around memorable choruses, some absolutely stellar guitar work, and a big arena anthem feel to just about everything here.  The production is also excellent, and I really enjoy the sound obtained with the drums here and the amount of presence given to the bass is appreciated throughout.  I am typically pretty happy with the sonics on AFM Records releases, and Gods Of Tomorrow is not an exception.  Definitely better than anything the band has put out in the post-Garcia years, and possibly my favorite Victory record since Temples Of Gold, Gods Of Tomorrow is due out in late November and is an album that should be on every metalhead's Christmas list for 2021!

Rating:  A very crankable return for Victory!  Crank this to 8!

Posted by arttieTHE1manparty at 6:11 PM