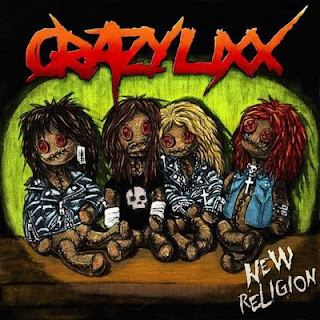 (c) 2010 Frontiers Records
Danny Rexon--Vocals
Andy Dawson--Guitars
Luke Rivano--Bass
Joey Cierra--Drums
Is there no end to the talent pool in what I like to call the Swedish Strip scene?  While many people, myself included, would consider Crashdiet to be at the top of the heap, there are any number of excellent bands that are vying for the number two spot...if not trying to dethrone Crashdiet as the top dog.  Hardcore Superstar is certainly one of the bands you have likely heard of, and Reckless Love is another.  However, Crazy Lixx may be the best band you have not heard of (unless, of course, you are into this scene) and they may be the band with the best chance of unseating Crashdiet.

This is actually the band's second full length album, to go along with an EP, but it is easily their best output so far and it just screams 1980's, albeit with a bit more modern production.  In fact, the production on this album is the one thing I hear people complain about the most, claiming that it is simply too slick, too polished, to really fit into the scene.  I disagree completely, pointing to "21 Til I Die" as a perfect example of the band at their rocking best, with "Lock Up Your Daughter" and "Road To Babylon" also being strong rockers.  "My Medicine (R.O.C.K.)" reminds me of a Firehouse boogie number at first before settling into a Def Leppard-esque song, a la "Let's Get Rocked".  "Voodoo Woman" also falls into this category, but not all songs are Leppard worship, however.  "She's Mine" and "Blame It On Love" will draw as much comparison to a harder-edged Nelson as to Leppard, as the songs perfectly blend the pop sensibilities of the Nelson Twins with the hard rock attitude and big, layered choruses both bands employ.

People who may have already been fans of the band are likely to be curious about how the band's sound may have changed with Dawson taking over on guitars for Vic Zino who jumped ship to join Hardcore Superstar.  To me, Dawson is actually a step up on this type of sound.  Zino fits the sleazier sound of Superstar, at least to my ear, and Dawson is perfectly suited for this poppier, hair metal sound.  His leads are crisp, his solos, while not mind blowing, are sharp and melodic, and his rhythm playing is spot on, so the personnelle change should not deter anyone from picking this disc up.

Of course, since this release is on Frontiers Records, the production (provided by Chris Laney) is top notch, as is the packaging.  Of course, since it is on Frontiers Records, it is a bit tougher to come by at non-import prices, but sharp-eyed buyers may manage to snag this off eBay or while it is on sale through some on-line vendor for $15 or so.  Personally, I wouldn't hesitate to pay that kind of money for this effort, as New Religion is truly top notch and a definite step up, albeit a small one, over Loud Minority.

Rating:  No question this is top-notch stuff that should be cranked to 8.5!

Back To Reviews Index
Posted by arttieTHE1manparty at 2:36 PM