CINDERELLA "Caught In The Act" 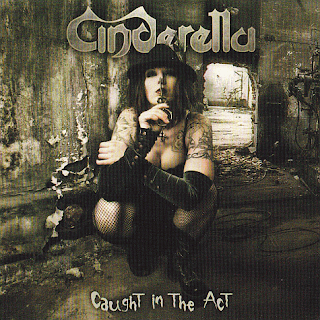 
Perhaps one of the cruelest stories of the 1980's hard rock/hair metal era is the sad situation Cinderella finds themself in today. As the story goes, Cinderella was pretty much roped into a brutal contract when they first signed and, more than 25 years later, the band finds themselves still trying to find a way out of it without having to give the label what could end up being the band's last chance for new material.  As a result, we are constantly fed (and in this case, re-fed) a steady stream of greatest hits and live compilations from one of the VERY few bands who has not changed line-ups, still tours on a regular basis, and still maintains a solid fanbase.  Despite Tom Keifer's on-again/off-again vocal problems and the occasional side-project from the members, Cinderella is still Cinderella and they are still one of the best (in my opinion) bands of the genre or that generation.

While Cinderella is unable to record for anyone else, apparently other labels do not have the same problem releasing Cinderella's stuff, as it seems a different label pops up with a new Cinderella release every year or two.  Now it is Mausoleum's turn.  The sad thing is that Caught In The Act is simply a repackaging of Live At The Key Club that was released on Dead Line Records back in 1999.  That's right...it's the same show, recorded originally in 1998, so if you already own the Dead Line version, the only possible reason to pick up Caught In The Act is the bonus DVD.

Now, the DVD itself is really nothing all that special as far as the quality of the performance, unless you have not been fortunate enough to see Cinderella live.  The DVD is well-enough recorded, I guess, but it is pretty much what you would expect...Cinderella performing live at the Key Club.  What makes this DVD special is the tracklisting, as the band performs some very obscure songs that I have not found on any other live recordings anywhere else.  "Sick For The Cure", "Make Your Own Way", "Love's Got Me Doing Time", "Love Gone Bad", and one of my all-time Cinderella faves, "Back Home Again" all find their way onto the DVD of this set.  These songs are the ONLY reason I would buy this package, and even then it stinks that I have to WATCH them, rather than listening to them.  Had the label transferred the audio from the DVD and made a full two-disc live album, I would have been ecstatic, as we would at least be getting some new audio material that hasn't been packaged and re-packaged a thousand and one times.  Sadly, it was not to be....

The sound quality is pretty good overall, and Tom's voice was still fairly strong at this time...not yet having gone through the problems the early 2000's would bring...so it is a pretty good live CD, just not anything that you probably don't already own.  If you don't have either version, go ahead and snap this one up for the DVD if for no other reason.  However, as I stated earlier, if you already have Live At The Key Club, unless you are a person who likes to watch their music instead of listening to it, I wouldn't bother to replace it.

Rating:  Rock the CD at 5.5 simply because it is a rehash. The DVD gets a crank-worthy 7 due to the rare songs contained.