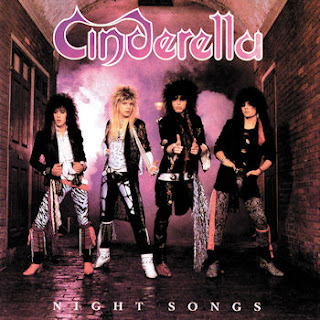 Additional Musicians:
Tony Mills--Backing Vocals
Jon Bon Jovi--Backing Vocals on "Nothin' For Nothin'" and "In From The Outside"
Jeff Paris--Keyboards

Ah, Night Songs.  This CD is one of the cornerstone memories of my 1980's youth!  In fact, this is the very first album I can remember actually anxiously waiting for its arrival.  I remember seeing a promo poster for this album hanging up in my favorite mom & pop record shop (remember those?!) and thinking how cool these guys looked, all decked out in leather, spandex, and sky-high hair!  If these guys sounded even half as cool as they looked, Night Songs was gonna ROCK!  I was not disappointed then...and I still get a flashback grin every time I spin this record.  From the haunting wind and chugging guitar intro of the title track to the scorching closing riffs of the massively underrated "Back Home Again", Night Songs became the measuring stick by which I would judge all other "hair metal" albums of the time period.

One of the things I find hard to believe about this album is only three songs were released as singles, ("Somebody Save Me", "Nobody's Fool", and "Shake Me"), and only "Nobody's Fool" made any significant mark on the charts (reaching #13 on Billboard's Hot 100).  Perhaps it is a testament to the power of marketing, word of mouth, intense touring, and yes, MTV, as despite this lack of radio success, the album sold over 3 million copies in America alone and managed to hit #3 on the album sales charts.  Considering it is such a rarity for bands to even go gold now (500,000 album sales), hitting triple platinum on a debut effort is quite an accomplishment, especially with the limited assitance of radio at the time.

As to the music itself, Cinderella, at least on this disc, did not have the bluesy style that they would later be noted for.  Instead, the guys stick to the hair metal sound that was really starting to come into full bloom by 1986, although there is no denying that they had a bit of a sleazy edge to their sound, especially with the plodding, somewhat sludgy sound of the guitars on the title track, for example.  Keifer's vocals, which he always kept in the raspy, snarled style here (as opposed to more of an actual singing approach he would take later when vocal problems began to appear), also set Cinderella apart from many of their peers.  I know of several people who claim that Keifer's vocals actually turned them OFF of the band during the Night Songs era, but for me, this was Tom at his finest vocally, although I certainly love the style he adopted later as well.

Despite the passage of 25 years, this is one album of this genre that I think still sounds as great as it did back in the day.  Granted, modern production techniques could definitely clean up some minor issues on a couple of tracks, but to me, that 80's production is part of the charm of the era's sound.  I am surprised, however, that there was not an anniversary edition of this classic released, at least that I am aware of, although the band/label legal issues that have been ongoing for years (and which have prevented Cinderella from releasing a new album) may be part of the reason for us not seeing a repackaging of Night Songs.

As to the songs themselves, there are only a couple of tracks that I would consider filler material, and even these are not skippers for me.  I have never been a particular fan of "Once Around The Ride" or "Nothin' For Nothin'", as I just don't find either one of them particularly catchy, especially when played alongside hook-laden tracks like "Somebody Save Me" or "Shake Me".  "Nobody's Fool" is a definite lighter-in-the-air ballad for these guys (who had several more on subsequent albums), and, as I alluded to earlier, I think "Night Songs" and "Back Home Again" are just monstrous bookends to this great album, with "Back Home Again" being one of the most underrated tracks in this band's catalog.

If fans of the New Wave of European Glam and Sleaze are looking for classic material from some of the best the scene had to offer back in the day, Cinderella's Night Songs is a disc that MUST be near the top of the search list.  Still readily available and generally very easy to find for under $10 on eBay or elsewhere, there is no reason not to have this gem in your collection...or in your stereo!

Rating:  Just about perfect for me, even with a couple of less-than-classic tracks.  Crank this sucker...repeatedly...to 8.5!

Back To Reviews Index
Posted by arttieTHE1manparty at 9:18 AM