ROYAL BLISS "Waiting Out The Storm" 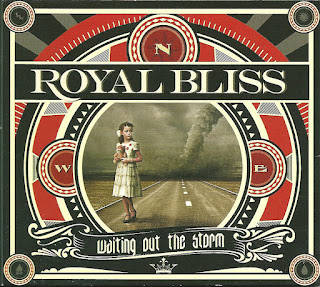 Waiting Out The Storm is the latest album from Salt Lake City's Royal Bliss.  Royal Bliss is another one of those modern hard rock bands that seems to trip something within me and actually get me to sit up and pay attention, much like Hinder, Shinedown, Underride, and a small handful of others.  I'm not saying they sound anything like those bands, because they really don't; in fact if I was to compare Royal Bliss to anyone it would be my favorite modern rock band of all time, Fuel.  Much like Fuel, Royal Bliss has that special combination of powerful vocals, big guitars, strong, catchy hooks, and generally excellent songwriting, which creates the perfect mix for me and keeps me interested throughout the majority of the disc.  While not everything is a 100% hit here, there is nothing that is unlistenable or that makes me want to turn the disc off.

Royal Bliss faced a bit of a challenge with this effort as former bass player Tommy Mortensen and guitar player Chris Harding are no longer with the group, although both appear on the majority of the new album.  I have no special insights, but perhaps these departures are part of the "storm" that the band was waiting out in the two years since their last album.  If so, then perhaps this album is that much better because of the adversity the band had to endure and overcome, as I think Waiting Out The Storm is a more concentrated, more cohesive sounding effort than Life In Between, which I thought was a generally solid album.  Additionally, I think the band has found a heavier edge to their sound on this disc, as is especially evident on tracks like album opener "I Got This" which features one of the best guitar solos on the disc as well as some tasty bass work from new member, Crawford.  "Monster" is another crunching moment on this new disc, and "Wake Up" is another great fist-pounding moment.  In the end, I think the attitude-laden tracks "With A Smile" and "For No One" may be the best of the rockers here and are two of the tracks I find myself coming back to repeatedly.

On the flip side, Royal Bliss makes sure to tone things down from time to time.  "I Will Catch You" is a very strong track here, but the single "Crazy", which is all over rock radio right now, is a bit of musical magic that shows the band in an even more toned-down, contemplative mood.  Written by Middleton about the hardships he suffers while on the road away from his wife and family, this is definitely one of the moments that I was talking about catching my attention and making me take notice.  It's a rare thing when a ballad is one of the first tracks I notice on a disc, especially one with some seriously rocking moments, but "Crazy" is just one of those special tracks.  That being said, I also really enjoy the rock remix of "Crazy", although no one should expect the song to stray too far from it's original sound.  There is a good deal more bite to the guitars on the rock remix, a bit more punch to the bottom end, but in the end, it's the vocals and lyrics that drive either version of "Crazy", so you can't go wrong with either version.

Somewhere in the middle is the other song that grabbed me instantly.  The kind of off-the-beaten-path track "Bleed My Soul" is a semi-acoustic,  70's throwback number that has a hook and groove you will swear you have heard before, yet it doesn't scream rip-off like a lot of retro efforts drifting on the airwaves today.  This is a truly great summer-feeling song that I can imagine being played around bonfires on the beach at sundown.  Great stuff.

A couple of tracks don't work quite as well for me, although they are not terrible by any means.  The grungy "Sunburn" leaves me wanting a bit, probably because it doesn't really ever find a groove or hook that I can really grab a hold of.  "High On Fire" is a decent rocker, but it sounds too much to me like everything else on XM/Sirius Octane right now, and doesn't really establish its own musical identity, especially alongside some of the others here.  I don't hit the skip button or anything, but I also don't find this song getting stuck in my head like "Bleed My Soul" or "With A Smile".

For people who loved this band's sound on earlier tracks like ""We Did Nothing Wrong" or "Save Me", there is plenty to love about this newest effort.  For those who were looking for a bit more from an obviously talented band, Waiting Out The Storm will not disappoint you, either.  If you are looking for nothing but glam or sleaze, you are likely not going to be a fan of Royal Bliss, but if you are willing to expand your hard rock vocabulary to include some of the best modern rock available, check these guys out before the vast majority of the bands you hear on the radio today.

Rating:  Crank this to an 8.5 and prepare to be instantly hooked by "Bleed My Soul", "Crazy", and "With A Smile", among others.

Back To Review Index
Posted by arttieTHE1manparty at 8:25 PM