TUFF "What Comes Around Goes Around...Again" 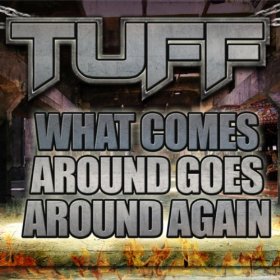 TUFF is one of those bands that just refuses to die...which is a good thing.  Long considered, at least by myself, as one of the most underrated of the 80's hairbands, Stevie Rachelle and his revolving cast of band members (which usually included Todd Chaisson) just continued to release new albums, live albums, best of packages, and the occasional "hit" track, such as the surprise breakout track "American Hairband" from 2001.  Despite all of this, Tuff has never exactly been an upper-tier member of the hair genre; heck, they aren't even second tier in terms of album sales, videos, airplay, or even name recognition.  So why in the world would the band put together and release a re-recording of PART of their best known (and only major label) album, What Comes Around Goes Around?  For me, the why isn't all that important, as I am simply very glad they did it...and did it right.

Now, this isn't a complete re-recording of that 1991 album; less than half of those tracks are included on this new version, but most of the high points are all here.  "What Comes Around...", "Good Guys Wear Black", "I Hate Kissing You Good-Bye", and the anthemic "The All New Generation" are given a second chance at life, along with "So Many Seasons".  The production is decidedly more modern on these new takes, with a grittier sound for the most part.  Rachelle no longer sounds like the blatant Bret Michael's rip-off he was always (wrongly) accused of being, as his voice is also grittier than it has been in the past.  This works especially well on "Good Guys..." and the reworked "The All New Generation", which could be called "The New All New Generation", as an additional line has been added to the song, throwing in more modern band names such as Black Veil Brides alongside Skid Row, Poison, Motley Crue, etc.  It's a nice touch that bridges the old and new schools without coming off like a band pandering to the new fans it hopes to attract because, in all reality, it is old school Tuff fans that are going to be picking up this new album for the most part.  I do wish that a couple more tracks from the original album had been added here, specifically "Ruck-a-pit Bridge" and "Spit Like This".

For me, the real treat on this disc is the re-mastered demos from 1988 and 1989.  These songs have been circulating out there on the demo market for some time, but the quality has ranged from pretty okay to downright awful for the most part.  It was great to get to hear songs like "Round 'Em Up", "Down On Sinner Street", and one of my favorite Tuff tracks ever, "Ain't Worth A Dime", all given the digital touch up.  However, that is all that has been done to these tracks...a cleaning up of the sound.  The original vocals and instrumental tracks are still intact, so you get a definite throwback sound with tracks 7-12.

Now, before I go further, I need to address one question I have.  I "think" there may be an error in the chronological listing here, as I have the original Atlantic Records version of What Comes Around Goes Around, and there is NOT a song called "Put Out Or Get Out", yet it is listed as a re-recording.  Additionally, "Ain't Worth A Dime" IS on the Atlantic Records album, yet it is listed as a 1989 demo version.  Granted, there could have been demo version previously, but I have to think that something is amiss with the track listing or chronological information.  It is a small point, but it did confuse me a bit...

Moving on, the last two songs, "Move Along" and "So Many Seasons (Piano Version)" I could honestly do without.  Neither is terrible, but "Seasons" sounds tired in this format and doesn't fit the fun and energy of the rest of this disc.   Honestly, I skip "Seasons" and don't pay much attention to "Move Along", although I may be doing that song a disservice.  It is just that being placed after the old school sounds of the 80's demo re-masters, "Move Along" kind of sticks out a bit.  Perhaps it will grow on me.

Granted, special guests riddle the re-recorded tracks, with such big names as Stephen Pearcey (Ratt), George Lynch (Dokken, Lynch Mob), Keri Kelli(Ratt, LA Guns, and a dozen other bands), Jamie St. James (Black N Blue, Warrant, St. James), and Steven Brown (Trixter), among others, taking their turns behind the mic or on the guitar, but this is like sprinkles on top of an already well baked and frosted cake.  These songs are strong enough, and the performances by the actual members of Tuff are solid, so the re-recorded songs don't need a lot of additional flash and flair, although I'm not going to complain about the chance to hear another George Lynch solo.  Surprisingly, Jeff Loomis of Nevermore, pulls off one of the coolest solos on the disc despite the fact that Tuff's music is definitely not the style Loomis is mostly associated with.

Is What Comes Around Goes Around...Again worth picking up?  Absolutely, especially if you want to hear a nice mix of where the band is now (re-recordings) and where they came from (re-mastered demos).  The classics from that underrated 1991 effort are given new life an dfans are given a chance to hear songs many may not have realized existed.  Obviously, Tuff isn't breaking any new ground here, but perhaps WCAGA...A can be a launching pad for someall new Tuff recordings in the near future.

Rating:  Crank this to a fun 7.5, with only a couple of missing favorites and a weak piano ballad keeping this disc from scoring higher for me.

Back To Reviews Index
Posted by arttieTHE1manparty at 10:31 PM