JACK RUSSELL "For You" 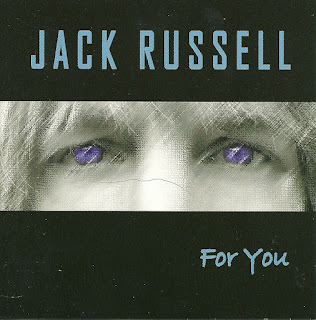 Jack Russell's second solo record away from Great White is a pretty stark departure in style from what fans have come to expect from the powerhouse vocalist.  The music on this disc is considerably more pop-oriented than just about anything Great White has done, and also far more pop-laden that Jack's first solo effort.  The possible exception would be some of the more mellow, smoother stuff on Sail Away or maybe the band's latest effort, Rising, although both of those albums at least retain some of the bluesy grit that became the band's post "Once Bitten, Twice Shy" sound.

If I had to categorize the music on this album, or throw out a name to compare with, I would have to say the recent, poppier Santana style would be close.  The guitars, played on this effort by Bob Kulick, are very smooth and distortion-free.  The solos, while present, are unspectacular and incredibly laid back, so that doesn't really fit the Santana comparison, I guess.

Jack's vocals are still very powerful and smooth, but the songs themselves are generally unspectacular.  "Any Kind Of Love" is a decent up-tempo number, and "The Best Is Yet To Come" holds its own fairly well, also.  The ballads, as might be expected, are pretty good, but again, don't hold the power or appeal of anything Great White has done, although "For You", the only single released from the album, does lend itself to repeated listens.  Other than this handful of songs, however, you get the feeling Jack was trying to be a bit more pop-oriented, maybe even adult-contemporary in places, and leaves most of his rocking side behind.  This is a shame as much of the material comes across as filler fluff as a result.

As with his previous solo effort, For You is long out of print from the tiny Knight Records label and is very hard to come by.  Again, this disc can easily fetch $30-$50, but I can honestly say that the collector in me sought this record out and not the music fan, because this is not what I would normally invest that kind of money in.  In fact, I DIDN'T invest that kind of money in it; I got it in a trade.  If you can find it cheap, go ahead and snag it for it's collector's value and to maybe spin once in a while.  There is also a CD-single out there for the title track for those collectors who, like me, are inclined to pick up such items.  Again, the single is incredibly rare, as I think it was only released as a radio promo item.

I realize there is not a lot said in this review, with less detail than I tend to give sometimes, but in all honesty, there is just not a lot more to say about this effort.  It has the feel of a singer who tried to change his style a bit but didn't really succeed in improving his sound or reflecting the successes he already had.  Not terrible, but not great, either...more bland than anything, really, which is a lot coming from a Great White fan of my caliber.

Rating:  Despite being a huge fan of Jack and Great White, I can't recommend doing anything more than rocking this at 5.5.

Back To Reviews Index
Posted by arttieTHE1manparty at 8:03 PM