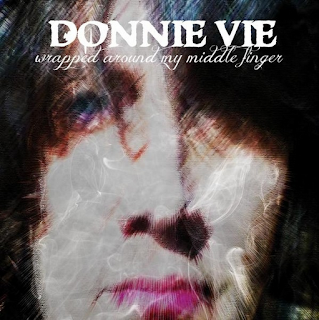 (c) 2012 Cargo Records
Donnie Vie--Lead Vocals, Guitars, Bass, Piano, Keys
Victor Alfaro--Drums, Percussion
Additional Musicians:
Kip Winger--Vocals, Bass on "Now You Know"
CJ Szuter--Additional Guitar and Vocals
Tim Tame--Additional Guitar
James Breker--Additional Bass
Bubblegum rock, jangle-pop metal, Beatle-metal...I don't care what kind of silly label you put on their music, Enuff Z'Nuff are undeniably one of the most musically recognizable, most melodic of the hair bands to come out of the late 80's and early 90's.  With unmatched harmonies, delicious guitar hooks, and catchy melodies, it is difficult to understand why this band really got no further than "Fly High, Michelle" and "New Thing", as far as hit songs goes.  And, for my money, the main reason that this band sounded as good as it did (and as good as it still does) is the vocal talent and songwriting abilities of this man, Donnie Vie.  On this, his third solo effort, Vie really finds his stride, mixing in the Beatle-esque sound Enuff Z'Nuff fans have come to expect with not-so-subtle hints of Cheap Trick and some slightly off-kilter rhythms that will have fans of the man's main gig salivating from note one.
The first three songs here are kind of a mish-mash of sounds and style, possibly leading the impatient to dismiss this as an incomplete effort with no true direction.  Ahhh...but patience is a virtue, young grasshopper.  Just hang on.  It's true that things start off with the hardest rocking song on the disc with the toungue-in-cheek title track, "Wrapped Around My Middle Finger", a song about the trappings of being a superstar rocker, even if Vie has never really found himself fitting that category 100%.  This is probably the song that is the farthest from the tried-and-true Enuff Z'Nuff sound, yet it is still a very good song that I would love to hear Vie tackle for a complete album at some point.  Featuring a fairly heavy riff and a tight groove, "Wrapped..." is definitely not the glam-Beatles-pop most people likely came looking for.  But that changes quickly...

"Wunderland" gets things immediately headed in that Beatles-like direction with those catchy harmonies and poppy guitar work that Enuff fans will latch onto instantly.  But then track three, "Lisa", changes things up again.  While still retaining a retro sound to it, it isn't the Beatles I hear as much on this track as something more akin to a Partridge Family song, or maybe Monkees song.  It's hard to describe, really, but it is a solid track that fits the overall feel of this album well...if one can find a consistent style or theme running through the disc.

"Daddy's Girl" is a powerful acoustic ballad that I think just about any father can find something to relate to.  This is a song that could easily be found on the strongest Enuff Z'Nuff albums.  The same can be said of the other big ballad here, "Lil Wonder", which I would almost swear was a leftover track from the Strength recording sessions.

As good as those songs are, there is no doubt in my mind that the run-away top moment of this disc is the excellent rocker, "Now Ya Know", which features a killer guest vocal turn by one Mr. Kip Winger.  Winger tackles the verse lyrics here, with Vie handling the bridge vocals, and then the duo handles the chorus together.  The song structure here is somewhat odd, with the majority of the song being a really solid hard rocker, but then the poppier, janglier chorus interrupts things, but in a way that adds to the power of Kip's verse work.  If you can find somewhere to stream this track, do yourself a favor and check it out, because I am sure my words are not doing it proper service.

Over the last half of the disc, there are a few songs that are not quite as catchy or memorable as the first five songs, but nothing stands out as being a wasted listen.  "No Escape" is another retro-feeling song, and "Rattle On" is a definite toe-tapper, even in its stripped-down, acoustic delivery. "Flames Of Love" has Enuff Z'Nuff dripping off of it, and "I Won't Let You Down" is a solid, if not overly memorable, slower tempo number that I don't think I would categorize as a ballad, but I would also never call a rocker.  The album's closer, "Smokin' Hot Lollipop" is a fun, catchy number complete with piano and an upbeat, almost Fine Young Cannibals sound to it (if you can imagine that!).

If you can get past the basically HORRIBLE cover art, there is a lot to like about this album.  It is definitely not a pure Enuff Z'Nuff album, but it also never strays so far from that style and sound that this feels like a completely different animal.  I would recommend anyone who likes Donnie and Chip's regular band should pick up Wrapped Around My Middle Finger, as this is solid jangle-pop-rock fun for 90% of the effort.

Back To Reviews Index
Posted by arttieTHE1manparty at 8:15 PM