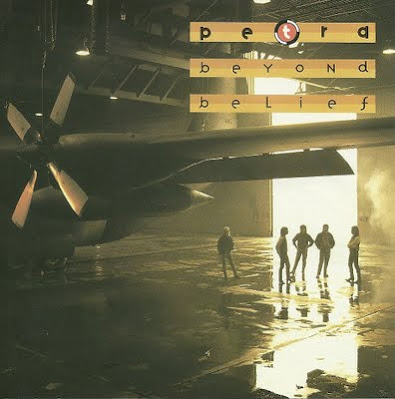 When a band has been around as long as Petra, they have likely seen many trends come and go...and possibly participated in a few, as well.  This is true of Petra.  Once John Schlitt replaced Greg X. Volz as lead vocalist, the band immediately went in more of a polished hard rock direction, which I love, versus the more folk-rock style that Volz often incorporated (although older Petra does have its solid classic rock moments as well).  By 1990, the more slickly polished sound of arena rock had become the big thing, and Petra was quick to jump on board with their new effort, Beyond Belief.  The results were...well...nah, the pun is just too easy.

Beyond Belief is one of those albums that fans either gravitate toward or turn their backs on.  The sound on this record is huge:  big guitars, pounding drums, slick production, juicy hooks, and plenty of powerful vocals that Schlitt delivers with style and conviction.  Some people will, of course, accuse Petra of selling out to the current trends, but really, Beyond Belief is a natural progression from On Fire! and even This Means War, with solid hard rock song writing backed by some excellent performances.  Yeah, the production is definitely more arena rock than classic rock, especially with the additional attention the keys get here, but overall, its just rocker after rocker after rocker flowing off this album, with only minor stops at the ballads the band has always incorporated, but which I have never really found myself overly drawn to.  I'm not sure why, but as a general rule, I am just not a fan of most Christian rocker's ballads as they tend to come off TOO sugary sweet for me, with no real bite.  Granted, this is not a 100% carved in stone rule, as I love some of the stuff Holy Soldier, Stryper, Rez, and some others have done, but for me, most of the time the ballads become skippers, even when the legendary Petra is involved.

Band founder, lead guitarist, and stalwart member, Bob Hartman, continues to be the main songwriter for the band, although this time he did get some help from former Kansas member/current Mastedon leader, John Elefante, who also produced the album with his brother, Dino.  Together, the Hartman writing and Elefante production brings to life the biggest sounding Petra album to this point in the band's career, and one that saw multiple Christian rock charting singles, including the hard rocker, "Seen And Not Heard", the slick AOR of the title track, the powerful melodic rocker, "Creed", and the ballad, "Prayer".    All are solid tracks, with "Creed" being a monster of a song in its full sound, melodic approach, and powerful lyrics, and "Seen And Not Heard" one of the best rockers on this effort.  I would also recommed "Armed And Dangerous", "Underground", and "Last Daze" as far as hard, yet melodic tracks that fans of Def Leppard's Hysteria and Adrenalize style should love.  "I Am On The Rock" and "What's In A Name" are also solid rock numbers, with "Rock" having a bit of a dance rhythm to it that a lot of people will find hard to resist tapping their feet or nodding their head to.

The two ballads, which are spread out evenly as the fifth and tenth tracks on the disc are pretty much standard Petra ballad material.  "Love" is my preference of the two, and is one of the very few Petra ballads I don't just automatically skip, although it also would never work its way onto a personal best-of compilation or anything.  As I mentioned previously, most Christian rock ballads are just to saccharine for my tastes, usually overblown with keyboards and lacking in solid guitar work.  There are very few instances where the words "power" and "ballad" come together on a Christian disc, which is unfortunate, and they certainly don't do that here, either.  Both deliver strong messages, and Schlitt's softer approach is gallant in its effort, but these songs, especially "Prayer" just leave me feeling flat, especially after the rest of this disc has pumped me up so much.

Overall, this is one of the Top Three Petra discs of all time (in my opinion, of course), and is a worthy addition to any melodic hard rock collection.  Hartman is a  more than capable guitar player, able to play solid rhythms and pull off some killer leads with equal skill, and it would be very hard to find a more powerful, charismatic vocalist than Schlitt, who formerly fronted classic rockers, Head East.  Lawry's keys are a nice polishing touch, not overpowering or so out-front that it changes the sound of the record, and Cates and Weaver are steady, if not flashy players throughout (although Cates does have some tasty bass lines on a couple of the dancier numbers).  Generally not hard to find, Beyond Belief is a nice pick-up for $8 to $10 and one that is likely to stay in rotation for most people for a considerable length of time.

Back To Reviews Index
Posted by arttieTHE1manparty at 9:48 AM