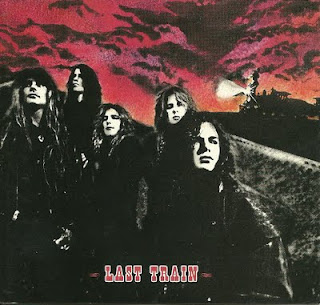 Michael Cutting is gone, and Scott Sonderstrom is in on guitars, but other than that change, the Holy Soldier train kept rolling along with this, their sophomore release.  Sure, there is a bit more of a bluesy sound to this effort and a tad bit less "hair", but there is no mistaking that this is still Holy Soldier (trust me...there would be PLENTY of mistaking that fact on the next studio album).  Steven Patrick's soaring vocals are still in top form here, proving equally powerful on hard-edged rockers like "Virtue & Vice", "Crazy", "Hallow's Eve", and "Dead End Drive", as well as the soaring ballad work of "Tuesday Mourning".  It's interesting to hear Patrick tackle the Rolling Stones classic, "Gimme Shelter", and I really enjoy the Holy Solider spin on this song, but I am willing to bet that most Stones fans would shudder at the band's approach.  But, to my ears, nowhere does Patrick deliver a more complete performance than on the album-closing title track, "Last Train", which finds the singer delivering a mournful, bluesy moan approach he had not shown before.  When combined with the exceptionally powerful lyrics of this song, I think this last track, with this line-up, is truly the pinnacle of the band's career.

Musically, I think the band really found their sound on this disc, finding that perfect balance between the Sunset Strip sound that got them their record deal and the blusier work that they incorporate on several tracks.  They do nothing to alienate their fan base, and, much like Cinderella altered their approach as they matured, Holy Soldier sound more like a band who is growing than they do a band in some sort of transitional or experimental phase (that would come later).  Soderstrom holds his own on guitar, and he and Cramer again deliver a brilliant axe-tandem that could compete with any duo of this genre, in my opinion.  Robbins and Russell provide a solid backbone for the music to be built upon, as well, and, as a band, these guys can write and execute a hook as well as anyone at the time.  In fact, had these guys been on a major label at the time, instead of the Christian-only label they were signed to, I find it hard to believe these guys would not have been all over hard rock and Top 40 radio, as well as MTV.  They had the look, the sound, the style, and, at one time, the fan following that major labels were after...they just also had an uncompromising message that they were not willing to sacrifice.  (Remember, there was just Stryper out on the frontline as far as Christian hard rock and metal goes at this time; there were no Skillet's, no Red's, no 12 Stones, and no Brian "Head" Welch to garner mainstream radio or video play.)

Produced once again by David Zaffiro, this album has a killer sound with nice, full production and a solid mix.  Band pictures and lyrics are included in the packaging, which is always a nice touch.  This disc is far more difficult to find than the self-titled disc, as this one has not been officially reissued, at least that I am aware of.  There are some bootlegs floating around there, quite often marketed as being "Brazilian imports" or "Russian imports", but none of these are band-endorsed as far as I know.  As such, plan on spending about $25-30, on average, for this increasingly rare disc, but trust me when I say it is well worth the money.

Rating:  Crank this one to a most excellent 9, with only nine songs likely being the reason it's not a 10!

Posted by arttieTHE1manparty at 6:08 PM