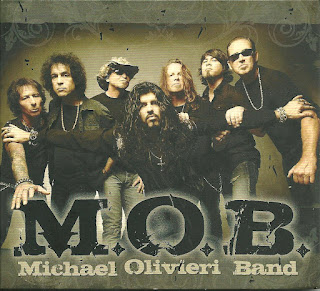 It's a difficult task to categorize the Michael Olivieri Band, but I would sum it up like this:  take a chunk of Leatherwolf, mix in some country, bluegrass, blues, jazz, southern rock, and a touch of rhythm and blues, stir it up liberally...then TAKE OUT the Leatherwolf!  In fact, you would be better served in listening to this disc if you didn't see the name of the band, because people who come to this effort expecting to hear Leatherwolf-styled metal are going to be sorely disappointed.  Actually, anyone who is not open to anything other than hard rock or metal is not going to walk away from this disc satisfied at all, because it is not hard rock, it is NEVER metal, and it has more in common with blues, bluegrass, and jazz than it does anything.  Vocally, Olivieri never lets a scream rip or snarls his way through a track, either.  Instead he approaches these tracks with vocals that range from a soulful growl to a smokey, barroom rasp, showing that there is far more range and depth of emotion in his vocals than a lot of people may have anticipated.

There are some moments that have a rock feel to them, but it isn't hard rock.  For example, "Talk Me Down" has a definite Queen vibe to me, and "Broken Glass" has a somewhat Pink Floyd/Roger Daltry feel, especially in the atmospheric feel of the music.  But these songs are not the norm, as for most of the disc, Olivieri and company are more in bluesier territory, such as the dark "Dead Man Crawl", which features a Wurlitzer, harmonica, and some interesting vocal approaches that utilize moans, groans, sighs, and such.  "Halo" is another very blues-based track that fans of that genre are likely to really sink their teeth into. The lead single, and album opener, by contrast, has something of a bluegrass-meets-acoustic country feel to it, as you can check out in the video below, and "Letting Go" mines similar musical territory, although it goes a bit more into old school country mixed with blues.

It is VERY hard to pigeonhole the Michael Olivieri Band, which I think may be intentional.  The man, himself, even says in interviews that the album meanders across several different styles and directions, covering pretty much everything he is into EXCEPT metal.  Overall, if you came to the party looking to melt your face with some great 80's metal, or even some pulsing hard rock, you are gonna leave the party disappointed.  However, if you came with an open mind (and ear), and are willing to get a bit experimental with your music, you are quite possibly going to find something to like about this disc.  As someone who grew up with country in the house as a kid before discovering hard rock and metal, I can get a feel for where a lot of this album comes from, but I know not everyone will.  For that reason, I have to approach my ratings for this album in two ways--from the standpoint of the typical reader of Glitter2Gutter, and then from the standpoint of a music lover.  So....

Rating:  For most Glitter2Gutter readers, I'm going to tell you to turn this down to around a 4, because I don't want to do you a disservice and make you think you're going to find what you are after here.  For people who are just music fans, regardless of genre, I would turn this up (can't say rock it or crank it...those don't apply) to a 6.5 or 7.

Posted by arttieTHE1manparty at 8:21 PM