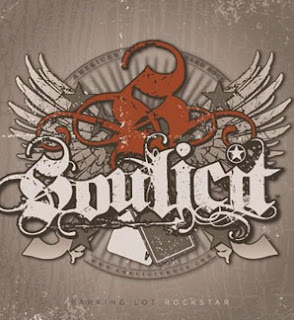 These boys sure don't want to sound like they are from Kansas, Dorothy!  While they maintain a fairly clean-cut, Midwestern image, their music is definitely rougher around the edges than a lot of the twang most people might associate with Kansas.  No, a country act Soulicit is not.  While they don't reinvent the wheel or anything here, Soulicit delivers one of the better modern hard rock records to come out in the past year or so, and is a far sight better than, dare I say, the last effort by Theory Of A Deadman, the band Soulicit is most likely to draw comparisons to.

Tracks on this little gem range from the fist-pumping, gang-shouted "Hell Yeah!" which opens the disc, to the laid back, almost snarky crooner delivery of the tongue-in-cheek title track, "Parking Lot Rockstar", to the contemplative ballad, "Complicated".  All three of these are likely to see significant airplay on rock radio and SiriusXM Satelite Radio before this album has worn the tread off the tires, and that is with good reason.  This is a set of finely crafted songs performed by a band that obviously has some tales to tell, even if they are not exactly from the hotbed of the hard rock world.  The guys definitely know how to throw down a guitar lick, and can turn a lyrical verse with the best of them...but they also know how to use a bit of comical phrasing to make a song work, as well.  Take for example the straight-forward honesty of this line from "Beauty Queen":


WHO HASN'T BEEN ON THE OTHER END OF THAT PHONE CALL (guys or gals)???  While some people may cringe at something so seemingly juvenile, I say its a slice of reality that keeps the songs here fresh and unpredictable despite the air of familiarity many of these songs will seem to have musically.  Again, Soulicit doesn't reinvent anything here; rather, they take the current Nickelback/Theory Of A Deadman musical trend and add-to and subtract-from it, crafting a muscular rock sound that easily shifts speeds and gears on this album.  Whereas their debut seemed a  bit more disjointed and struggled with the "couple of hits/lot of misses" syndrome of so many other current records, Parking Lot Rockstar flips that trend, with only a couple of lesser moments surrounded by a lot of upper-shelf material. Outside of the previously mentioned tracks, stand out tracks would have to include "Sticks And Stones" and "Too Cold To Pray", and "You Are The Song" is a track that I think a lot of people are going to latch onto quickly.  The two closing tracks are, in my opinion, the weakest, but neither is terrible.

Overall, I really like this album...a lot.  I've spun this disc numerous times over the past few weeks and it is one that only grows on me more with repeated listenings.  Definitely a good time summer disc and one that should be on your shopping list.

Rating:  Crank this to a really solid, fun 8!