HARLOT "Room With A View" 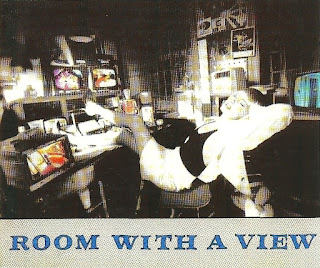 Here is one of those long lost albums that you read about occasionally, but rarely run across.  It's not that Harlot was a big name or that you've heard this album and just don't realize it, as much as it is that this was a pretty solid album with a nice, melodic hard rock sound that would possibly have scored a couple of big radio hits had it been released in America by an American band.  However, since these boys hailed from Denmark and since they had NOTHING in the way of label backing, this disc goes relatively unnoticed by people who aren't sure what they are looking at.  Trust me when I say that if you can find this one somewhere, you should grab it if the price is decent (anything under $20 is pretty good).

Comparable to such bands as Da Vinci, Treat, Bad Habit, or so many other very good-to-great Scandinavian melodic hard rockers, Room With A View is a solid listen from beginning to end, with only a couple of minor glitches in the songwriting.  For the most part, the album sticks to uptempo rockers underscored with keyboards that don't overpower the songs but enhance them, instead. There are a couple of exceptions, such as "So Much For Happy Endings", when the keyboards are just too out front for my tastes, but that is mostly a problem on the intro and the rest of the song is generally a good one.  (I believe this was also a single off this album in Europe...) There are actually some very strong guitars on this track, so I'm not sure why the band felt the need to incorporate so many keys.

As you would expect, there are a few slower moments as well, but surprisingly, these songs are not the strongest as one might suspect they would be with an AOR act such as Harlot. "Metropolis Children", which isn't really a ballad but is definitely lower-mid-tempo, really does nothing for me at all, although the chorus is a bit catchy.  "Spirits" isn't a horrible song, but it is pretty long (nearly 5:30) and really seems to drag and lacks any true hook.  "Bring Home Your Love" is easily the best of the slow numbers here and I suspect it was featured at more than one high school dance in Denmark as it has prom power ballad written all over it.  Reminds me of something Bad English would have done, as a means of comparison, and I'm guessing radio would have really feasted on this track if it had been on this side of the pond and on a big label.

When the band sticks to what it does best, such as on the rocking "Dancing On Dynamite" or "Invisible Ones", they are a very solid band, even if they do rely too much on keys at times.  Again, this is an album that I think people who identify themselves as fans of the AOR or melodic rock genres are going to really like, if not love.  If you are looking for more of a "hair metal" sound, you might find the album a bit weak overall, and if you are strictly in it for the sleaze, you should just go ahead and pass on Harlot, as they are not your thing at all.

As it is, I call it like I see it overall, and I try to not get caught up in the genre/label thing...

Rating:  Rock this at a good 6.5, with just a couple of tracks...and a few too many keyboards...keeping this from being a crank-worthy disc.

Back To Reviews Index
﻿
Posted by arttieTHE1manparty at 10:11 PM