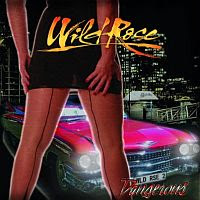 Holy retro, Batman!  When I put Dangerous, the new release from Greece's Wild Rose, in my CD player, I had to look around to make sure everyone wasn't suddenly wearing stone-washed jeans, denim jackets, spandex, and massively teased hair!  Seriously, a lot of bands go a long way toward capturing the sound and spirit of the 80's hard rock scene, but Wild Rose takes things to an entirely different level.  Were it not for the amazingly crystal clear production on this record, it would be basically impossible to tell much of Wild Rose's music apart from the keyboard-laden AOR material of the 80's such as Giuffria, Giant, Nelson, Heart, or even an act like a John Parr, a Richard Marx, or a solo Lou Gramm, at times.

This album was my first introduction to the band, so I had no issues with the shake-up of the band's foundation prior to the release of this disc.  From what I have gathered upon seeking out the band's previous efforts, we have a new lead singer and lead guitar player on this album, but I have no idea as to why the original members were replaced.  That being said, I have to state that I prefer Saylor's vocals to those of his predecessor, and there is no major change in the approach of the guitars on this album, so people who were fans of Wild Rose before are likely to find themselves fawning all over this album as well.

There are just so many 80's moments on this album, it's hard to explain it.  Heck, even the majority of the song titles were used on some pretty big hits from the 80's and early 90's!  Musically, "I Can't Stop Loving You" (not the Van Halen track) is about as pure a piece of 80's AOR worship as you can find anywhere.  The same can be said of the somewhat harder rocking "Is This Love" (not the Whitesnake song), and "Alone" (not the Heart song).  As I mentioned above, Richard Marx comes to mind when I hear a song like the ballad "Awake", and Lou Gramm's solo work can be referenced in "Not A Day Goes By".  "I Won't Forget You" (not the Poison song) is another above average mid-tempo rocker that reminds me musically of what Nelson was doing in the heyday of their career, although there are instances of excessive keyboard use in this track that almost ruin it for me.

In fact, if I had a complaint it would be the keyboard.  There are simply too many keyboards on some of these songs.  Heck, they have TWO keyboard players!  As I have stated before, I am not opposed to keyboards as a supplemental instrument as long as they are powerful and fill in the gaps between the guitars, giving the music that big, full sound.  For the most part, that is how the keys are used here.  But at times, such as on "Hold On", the keys are those tinkly, jingly sounds that really damaged a lot of the songs on Shy's Excess All Areas album, for example.  They are just too...prissy, too..I don't know...lacking in power.  As such, I don't really understand their inclusion.  To be fair, I didn't understand their inclusion in the 80's, either, as they tend to take some very good, sometimes even great songs, and make them very hard for me to enjoy.

Musically, it is impossible to deny the talent of this band.  They are impressive.  Lyrically, they are a bit simplistic, but not cliche like so many foreign rockers tend to be, and I think that has to do with the fact that English is Saylor's native language.  As such, there is also not that annoying accent problem that a lot of foreign singers have.  However, while musically very skillful, it is almost too clean, too pristine, to be rock and roll in spots.  As such, some of the songs come across like those on the last Journey album: musically perfect but not overly memorable or original.

If pure AOR is your passion, and hook-filled, keyboard-heavy melodic rock is what you are looking for, Wild Rose is definitely going to be a pleasure for you to listen to.  If you need more grit and more drive, you are still most likely going to find some things to like about this album, but you may find yourself asking where the teeth of the songs are.  For me, I am somewhere in the middle, as I can appreciate really good AOR, which Wild Rose performs, although, as I stated, a few of these songs just get too "pretty" for me, and I wonder how many of these songs I will be able to instantly recognize in the next several weeks, months, or years.

Rating:  A tough ranking for me.  Musically, there is no doubt these guys are in the stratosphere as far as skill goes, so a 9 isn't out of the question.  On the other hand, a couple of tunes REALLY turn me off, and one or two don't move me in any direction at all.  So, as a final rating, I'd have to say this album still manages to land in the crankable category, but just barely, with a 7 rating.  Some people will rate this MUCH higher, no doubt, and I couldn't argue their point.

Back To Reviews Index
Posted by arttieTHE1manparty at 8:12 PM