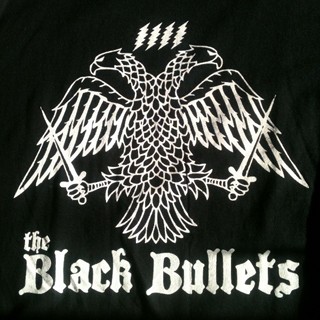 Perhaps not surprisingly, given their country of origin, The Black Bullets take a heaping dose of British punk, mix it in with a bit of sleaze, and stir in liberally such influences as Motorhead, AC/DC, and even Thin Lizzy, to create a form of punk-n-roll that people are either going to love or hate, with a slight bit of wiggle room in between (which is where I fall, but more on that in a bit).

In their bio, The Black Bullets are said to "live, eat, throw up, sleep, breathe, and drink rock n roll", and I have little doubt about that.  These four Brits play down and dirty, fast and furious, punked-up rock at such a  break-neck pace that some may find it difficult to keep up!  Castle's vocals have a definite punk approach to them, being more spit out than sung, and four of the five songs here are short bursts of angst (all under 2:40 in every case except for "All Or Nothing") that I am sure have the crowds at their shows slamming into one another in a furious fit.  The guitar tones used here are largely straight out of the 70's metal scene, especially on tracks like the self-titled "Black Bullets" and the Scott-era AC/DC inspired "Too Loaded For Love", while "All Or Nothing" uses a bit more 80's style and tone than the rest.  I highly doubt that Donoghue's drum kit survives a live show intact, as he sounds like he is beating the crap outta each tom and snare with every shot, and Bones is a solid bass thumper, but he also brings out one of the weakest points of this effort: the production.

Bones' bass is all but lost in the mix on three of the five tracks here, which is a shame, as that bottom end is what several of these songs are really missing.  I'm sure this is a relatively low-budget release, judging not only from the production, but also the packaging.  There are no lyrics, no thank yous, no credits, and purely black and white photography, all included in...you guessed it...my dreaded enemy, the DIGIPACK!!!

Musically, the band has pretty much one speed: warp speed.  They toy around with a bit of a tempo change on "All Or Nothing", but once they hit the chorus on that track, it's balls-out, full speed blasting once again.  This leads the songs to run into each other a bit, and with an album this short, it's over before I've really had a chance to define where things begin and where they end.  Also, I'm not sure if it is intentional or due to a lack of budget for retakes, but Castle's voice breaks pretty harshly in a couple of spots, which while adding to the punk quality of the effort, also detracts from the overall sonic quality, at least for me.  I will be the first to admit I have never been a big punk fan, but I think with just a bit more restraint, Castle would get more of a Lemmy-styled metal sound than the end result here.

All in all, a fine debut effort that will possibly lead to even greater things in the future.  I would be curious to catch a live performance by this band sometime, as I have read that Thin Lizzy and Motorhead covers are worked into the set, and I can imagine that both are done at a break-neck speed, making me wonder if the band could play more than a 60 minute set without including 20 songs and then running out of material!

Rating:  Rock this debut EP at 6, with the main issues being the production, the shortness of the album, and the lack of any real tempo changes, for the most part.  The talent is there, the execution, particularly in the production aspect, just needs to catch up a bit.