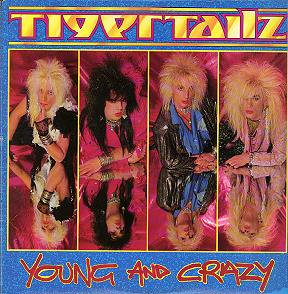 Released more than 25 years ago, Young And Crazy by Tigertailz remains one of the underappreciated albums of the 80's hair metal scene.  Released on two ridiculously small labels (Music For Nations internationally and Combat Records in the U.S.) by a band that seemed to be CONSTANTLY fighting and changing its line-up, it is really little wonder that fewer people have had the chance to wrap their ears around this band that looked like Poison but rocked more like early Ratt or the other more "metallic" hair bands of the time.

One of the first things that usually hits people with Tigertailz, or more specifically with Young And Crazy, is the surprisingly low register that Jaimz sings with.  Sure, he looks like a chick on the album cover, but Jaimz actually has a rich, lower register tenor that really gives TT's music a different feel than so much of the glam that was really starting to spread throughout the Hollywood rock scene.  Another thing of note is the previously mentioned metallic tone that Pepper tended to incorporate in the music, keeping the poppy feel of the music but giving a lot of this album's material a grittier edge than their visual image would lead most people to expect.  This is not to say TT should be confused with 80's-era Metallica or Megadeth by any stretch, but they are also not purely a Aquanetted pop band, either.  Sadly, one of the other things most people notice about this album fairly quickly is the relatively poor production quality, giving the release a slightly muddy sound, which is a huge shame.  (The 2008 re-release on Krescendo Records doesn't address this issue to any appreciable level, by the way...).

Every time I pop this disc in, I am always struck by the quality of the songwriting present here.  Solid guitar work, both in the rhythm and lead departments, a tight (if somewhat buried) bass line, and quality, if not flashy, drum work, really stand out on this album nearly as much as Steevie's vocals do.  So often bands from the Sunset Strip (and soundalike) scene would feature a great singer...OR a killer guitarist...or a flashy drummer...but rarely did a band have all the parts at the same time.  And, if they DID manage to have two or more of these parts, the songs were quite often lacking.  Not an issue for this album.  How the huge ballad "Fall In Love Again" isn't featured on every Monster Ballads, or similar, compilation is a mystery to me.

I also wonder how that huge track was left as the last track on this entire album!  But I digress...

Whether the listener is after top notch metallic rockers such as the title track, "Star Attraction", "Hollywood Killer", "Livin' Without You" or "City Kidz", or something a bit more along the pop lines such as "Shameless" or "She'z Too Hot", this album, and this line-up in particular, had all bases covered.  Later versions of this band would slip far more into the glammy territory covered by Poison, Warrant, and their pals, but for this one, brief moment, Tigertailz really DID have the scene by the...ahem...tail, if only they had been on a label big enough to allow them to capitalize on it.  Sadly, Jaimz would be gone within a couple of years of this album's release, and there would eventually be two versions of the band touring (sound familiar, Great White, LA Guns, Faster Pussycat, Queensryche, etc.?), with Tate's version of the band eventually taking Jaimz's version to court and wrestling the name away.  As such, Young And Crazy is the only album this version of the band would ever release.

As far as the liner notes, etc., the original version of the album DID feature full lyrics, credits, etc....BUT YOU CAN'T READ THEM!  It looks like the record label got the bright idea to just shrink the lyrics sheet and liner notes from the vinyl album without bothering to include a magnifying glass or microscope with every CD so that people could see them!  Seriously, the packaging is a mess on the original; I have not had a chance to get my hands on the liner notes of Krescendo Records' re-issue to see if this was cleaned up in any way.

If you can find an original copy, snag it, as a lot of collectors consider the M.f.t.N. or Combat Records versions to be extremely collectible, whether on vinyl or CD (not so much on cassette).  These can be pretty pricey, however, with used copies regularly selling for $25 or more.  If you can find a cheaper re-issue, or if you have no problems with digital downloads, I'd tell you to get this record at once, as it is an absolute gem that more people should give themselves the chance to hear.

Rating:  Definitely a crankable release!  Crank this to 8!

Back To Reviews Index
Posted by arttieTHE1manparty at 1:37 PM