WHITESNAKE "Made In Japan (Deluxe Edition)" 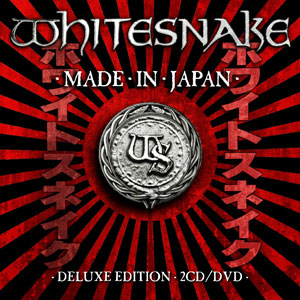 David Coverdale dusts off the Whitesnake machine again for the band's third live release in the past 7 years and fourth in the last 15.  Once again he enlists the help of guitar whizzes Doug Aldrich and Reb Beach along with a superb drummer in Brian Tichy and a more than capable bass player, Michael Devin.  This package is culled from the band's Loud Park Festival in 2011 and the band was obviously touring their most recent studio album, the very strong Forevermore.  So, with so much going for it, the outcome should be nothing less than amazing, right?  Not so fast...

First, make no mistake, David Coverdale is apparently ageless.  Sure, his voice has lost some range, especially following his vocal injuries from a few years back, but the man still exudes rockstar in both his vocal and visual performances.  The guy doesn't ever seem to age and just carries himself with amazing levels of class and poise, all the while making his performance look as effortless as drinking a glass of water.  The same can be said of the blistering performances of Reb Beach and Doug Aldrich who absolutely tear things up on their "Six String Showdown", which is fun not only to listen to, but also to watch.  But for as great as these performers are, the bands' collective performance is just incredibly flat to listen to for a couple of reasons.

First, the set list almost completely ignores anything pre-Whitesnake (1987). The only tracks from Slide It In to appear anywhere on this record are "Love Ain't No Stranger" and the acoustic version of "All Or Nothing" on the bonus disc.  Where are "Slow And Easy", "Standing In The Shadow", "Hungry For Love" or "Slide It In"?  Good question.  Likewise, there is no "Judgement Day" from Slip Of The Tongue, which I think is one of the most overlooked songs in the band's catalog.  And no "Still Of The Night"?  No "Crying In  The Rain"?  Is this even a Whitesnake show?!  Well, yes, but one that focuses very heavily on newer material, which I can understand, but it does leave the viewer/listener feeling like they only attended half of a concert when over half of the band's biggest hits aren't there.

My next problem with this effort is my biggest one, and effort is the catch word.  The band is so smooth, so comfortable, so polished that it looks like they aren't even trying...and it sounds that way, also. Other than the guitar showdown, and I guess you could throw Tichy's drum solo in there as well, the performances are generally pretty flat.  The flash and flair is all but gone from the sound.  Visually, they guys, especially Reb, still put on a show, but there is no punch to the music.  The keyboards are featured way too much for my taste, which also takes some of the steam out of the twin guitar attack which is ridiculous when you have two guitar players the caliber of Aldrich and Beach.  I don't know how much studio overdubbing was done before this package was released, and maybe there were no touch-ups at all, but everything here just glistens like highly polished stainless steel which just leaves it feeling lifeless for the most part.  And that's the real bummer of this disc because all of the guys are just so dang talented that you expect the music to just jump out of your speakers at you.  This never happens.

Visually, the DVD is very well shot with multiple camera angles and far above average sound quality, which is why it was likely very easy for Frontiers to just lift the music from the video and make the CD out of it.  As I mentioned previously, Coverdale looks great, prowling across the ENORMOUS stage with an energy a lot of younger singers simply don't have or at least don't exhibit.  As I've stated on numerous occasions, I don't spend a lot of time watching performance DVD's, and this one will be no exception, but it is not due to a lack of quality.  The DVD bonus material is nothing special, featuring a couple of slideshows and a couple of videos for "Forevermore" and "Steal Your Heart Away".

The packaging is a bit weird, at least in my opinion.  The liner notes are actually excerpts from Michael Devin's journal that he kept while on tour.  It's an interesting read, I suppose, but not something I will likely read again.  There are a few cool pictures and a complete list of credits and thank-you's, so I don't really have any complaints here, and, honestly, Frontiers Records generally does a good job with packaging their releases (even if this is a dreaded digipack!!! Grrr....).

In the end, this CD/DVD set reminds me a lot of a color-by-numbers rendition of a masterpiece painting; it may look great, but some of the artistry is gone.  That's how I feel when listening to this live album; the musical talent is definitely there, but the performance lacks any real grit or flair and it feels like the band is on autopilot for much of the recording.  For me, the real highlights are the guitar solos and the acoustic renditions of some lesser known tracks on the second audio disc, which doesn't really bode well for the whole project.  That being said, the acoustic numbers are done VERY well, and it makes me think a full acoustic album might be a pretty cool thing from Whitesnake.  As to live performaces, however, I would strongly recommend Live...In The Shadow Of The Blues, which has a much stronger set list and a ballsier performance.

Rating:  I honestly would recommend you Turn This One Down 4.5, but the bonus disc might salvage a Rock It rating of 5.  The set list is lacking as is the punch in the performance.

Back To Review Index
Posted by arttieTHE1manparty at 8:33 PM