BAD BOY EDDY "Over The Top" 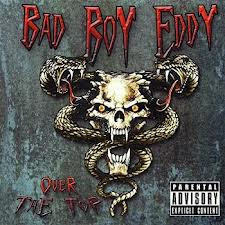 
Music can be a time machine when it is done well.  Hearing a certain song, or even just a specific lyric, can take you back in time to a happier, more fun moment if you are having a particularly bad day.  The funny thing is that Bad Boy Eddy achieves this effect despite the fact that I had never heard them before!  These guys perform completely 80's-sounding hard rock/sleaze in such an effortless, honest fashion that you honestly swear you have heard this album...and many of these songs...somewhere before.

For example, take the opening screamer of a track, "Fever".  Once you hear Eddy Vega cut loose on his vocals, you would swear this is some sort of Skid Row/Sledgehammer Ledge hybrid song instead of a track straight outta 2012! Same thing with the heavier, yet slightly more mid-tempo "She Gives Me A Feeling", which has Vega in prime Sebastian Bach mode, especially when he hit the chorus.  "I Don't Want You" has audience noise mixed into the background, but it's pretty obvious this isn't a live recording.  Still, Bad Boy Eddy continues to hit on all cylinders with thunderous drums and tight guitar playing on this catchy, anthemic number.  Other stand-out cuts would be the more "hair metal" sounding "Rad Ruby", which is poppier in sound than anything else here, reminding me of a sequel to Cats In Boots' "Shotgun Sally", and the album closer, "Maker Of Dreams" which showcases some pretty flashy guitar work at the intro and interspersed throughout, along with some of Vega's most Skid-styled vocals on the record.  Once again, the live crowd noise is mixed in on the hairy "Maker...", which is fine, although I don't really understand what the point is, as no one is going to be fooled into believing that this song is live.
﻿
All is not perfect on this record, however.  "Funky Monkey" is just about as juvenile a song as I have heard since the last time I put on a Steel Panther record.  This funk-infused rocker about a porno addiction is just plain stupid lyrically, although the music works surprisingly well (but don't hold your breath waiting for some Extreme-styled hard funk rock, as you will be left wanting).  Also of note is the ballad, "Fly Away", which shows off the fact that Vega can sing as well as screech, and also puts on display the band's softer side.  The problem is not the performance, its the fact that, unfortunately, this type of ballad is also very dated sounding and, as such, the song falls kind of flat. Too much sugar makes this stab at a straight-from-the-strip glam ballad the only truly skip-worthy track in this collection.  And, while a ball-buster musically, "Teenage Sacrifice" sounds somewhat comical coming from a band that is, no offense, NOT a bunch of teenagers!  These three tracks aside (two songs if you only consider "Funky Monkey" and "Teenage Sacrifice" for their lyrics and not their music), there really isn't much to NOT like about Over The Top except for the usual packaging issues I have with 95% of all Demon Doll Records releases (poor insert quality, lack of lyrics, etc.).  The production is of solid quality (live audience noise not withstanding), and there are no major flaws in the mix or the performance, which leads to a very solid album that I am able to enjoy without hitting the skip button more than once (just can't do the ballad...sorry...), although I do admit to cringing at a couple of lyrical turns as well.

If you are looking for a band that can intermix some straight up hair worship alongside something a bit heavier than most of the current retro-sleaze rockers, Bad Boy Eddy may very well be right up your alley, as they put on one heck of a show on this effort.  Hopefully we will get another quality release from this band in the not-too-distant future!

Rating:  Crank-worthy, no doubt.  Crank this very fine showing to 7.5!

Back To Reviews Index
Posted by arttieTHE1manparty at 5:02 PM