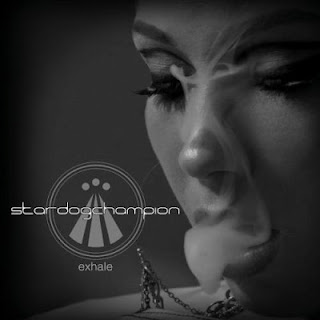 This is not Breaking Benjamin.

Things get rolling with the rumbling bottom end of James' bass before Karis' drums kick in on the mid-tempo modern rocker "Aphrodite".  For some reason, this song seems very familiar to me yet I'm not quite sure why.  It reminds me a lot more of the style of songs that were being played in the post-grunge late-90's than anything that is associated with Breaking Benjamin or similar modern rockers filling the airwaves today.  The vocals of Coyle  have a lot to do with this as he uses a wider spectrum of his vocal range than most of today's "I'm pissed at the world" snarlers that are only kidding themselves into thinking we buy into their faux attitude.  In other words, I dig what he has going on here, as his voice is used as an instrument on this track, adding to the melody of the song.

"Nothing To Lose" is another slightly uptempo rocker, again featuring that post-grunge Stone Temple Pilots vibe to the music, but once again, Coyle's vocals set themselves apart from pretty much anything this band will be played alongside on terrestrial or satellite radio, which I think is a good thing.  The guitar solo here is not overblown by any means, and falls into the vein of the stuff that Audioslave utilized on their first couple of records.  It's kind of interesting to hear a band actually use hand-clapping in a song, which Stardog Champion does on the chorus here.  A pretty cool track overall.

"When We Fall" is one of my two faves here ("Aphrodite" being the other...although I also really like "The Switch").  The bouncy rhythm of the song is catchy enough to draw the listener into thinking they are hearing one type of song, only to have the more urgent/less-poppy chorus change the mood and feel of things before becoming a mixture of both styles following the second chorus.  A very polished track that I would probably use as the radio single if I was doing promotions for this band, this song is head-and-shoulders above the majority of what Sirius-XM's Octane station spins today.  If these guys decide to go for a full-length song in the near future, I would love to hear an entire album done in the style of this and "Aphrodite".

"House Of Cards" is my least favorite song here, as it comes off as very cookie-cutter to me.  This is an example of a song that I think would get totally lost in the shuffle of modern radio today, as nothing really stands out about it.  There's nothing overtly horrible about it, but it sounds tired and even dated, honestly, with the band sounding like they are just going through the motions.  The exception would be another solid, if not flashy, guitar solo.  I have to say that I think Fink is a pretty talented guitar player and I think it would serve the band well to let him stretch things out just a bit here and there.  But who am I, right?

This EP closes with "The Switch", the only ballad of the album.  The guitar tone here reminds me a LOT of "Black Hole Sun" by Soundgarden, but I far prefer Coyle's vocals.  I'm betting this song came out of a session of the band sitting around listening to "Hunger Strike" by Temple Of The Dog, all going, "see...THAT'S what we should go for!"  Another very strong song on an EP that really only misfires once.

I don't know if the completely independent nature of this EP will hinder its chances at getting airplay, but if not, I am sure people  will be able to pick out a Stardog Champion song once they know what they are listening for.  As I stated at the outset, you get the feeling you have heard these guys before, but it's not because of the bands they came from; it's because of the bands they listen to.  After hearing this album even a handful of times, it's pretty obvious that Pearl Jam's first album, Soundgarden, maybe STP, and, obviously, Temple Of The Dog, are high on the list of influences for these guys.  That being said, don't expect clones, because you will be left disappointed if that is what you are after.  Knowing what you like and COPYING what you like are two very different things, and Stardog Champion is not a clone of anyone.

Rating:  Not your typical Glitter2Gutter material by any stretch, but a very solid listen.  Rock this at 6.5, with the album's length (just 19 minutes) being an issue, especially with 20% of the record (one track in this case) missing the mark.