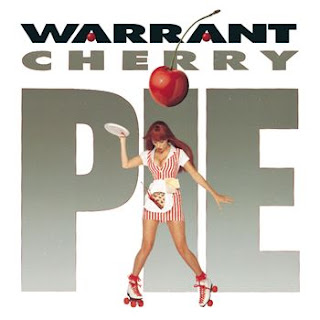 
Depending upon your point of view, Warrant, and specifically the Cherry Pie album was everything that was right...or wrong...about the hair metal scene and the Sunset Strip.  Huge hooks (and huge hair), hot girls, gang choruses, catchy pop-metal melodies, sexual innuendo, and sing along lyrics were all over the place on this record and it sold massively because of it.  Despite spawning four Top 40 hits and selling millions of copies, the album also received it's fair (and perhaps unfair) share of criticism from numerous places, including internally; it is not a big secret that Jani Lane hated the title track and rues the day he wrote it.

Originally intended to be titled Uncle Tom's Cabin (with the same song being the original lead single), Cherry Pie was a microcosm of everything that was going wrong with the industry and the Sunset Strip scene at the time.  Integrity as a musician wasn't important...videos were.  Musical talent didn't matter as much as sales.  So, famously, record executives and corporate suits told the band (or specifically, main songwriter, Lane) to record a "hit" with a chorus that people could sing along to, rather than lead with the much more serious (and far more musical) "Uncle Tom's Cabin".  Lane has gone on record stating that he wrote the song "Cherry Pie" in under an hour, basically slopping together a couple of hooks and ridiculous lyrical phrases, thinking the suits would hate it and let the album proceed with its scheduled release (the rest of the album was said to have already been finished).  Obviously, that didn't happen.  Catchy as all get-out, the song sounds almost like a blatant rip-off of Joan Jett's "I Love Rock And Roll", especially in the chorus.  Further adding insult to injury is the fact that the lead guitar solo is not even performed by a member of Warrant, but rather by C.C. DeVille of Poison.  In fact, it is widely speculated that the two guitar players in Warrant, Turner and Allen, didn't even play on the album AT ALL! (Album producer, Beau Hill, has gone on record stating that the guitars were played by Mike Slamer, not by Warrant's axe tandem).  Understandably, there is a lot to NOT like about the song and the album if all you look at are the controversies and the complaints.

What I encourage people who are just now delving into the back catalog of 80's bands to do is to look deeper into the album.  In fact, if someone were to come across this album for the first time, I would encourage them to SKIP ENTIRELY the title track, and jump into the much more musically diverse or lyrically deep tracks such as " Mr. Rainmaker", "Uncle Tom's Cabin", "Blind Faith", or even the power ballad, "I Saw Red", which was written by Lane as an autobiographical account of him walking in on his girlfriend and his best friend in bed together.  (Reportedly, Lane had a nervous breakdown as a result of the incident, further adding to the depth and folklore of this track.)  Even "Train, Train", a cover song originally performed by the band Blackfoot, which is rather simplistic lyrically, has a lot more to offer musically than the title track. "Bed Of Roses" is a more mid-tempo number that is a rather cliche collection of lyrics about love, but it is still not a bad song and I'm somewhat surprised it was never released as a single.

To be sure, there are some cheesy moments on this record outside of the title track.  "Sure Feels Good To Me" isn't exactly Shakespeare set to a Mozart soundtrack, but it's not terrible, either.  The same can be said of the other raucous numbers here, especially "Only Hell Your Mamma Ever Raised" and "Love In Stereo".  "Ode To Tipper Gore" was meant to be a humorous swipe at Mrs. Gore and her P.M.R.C. group, as it is nothing more than a string of outtakes from live shows in which Lane is heard to be spewing profanity.  It's a total waste of 54 seconds and was at one time removed from the album, only to be re-added on the reissue as a bonus track.

Speaking of bonus tracks, "Game Of War" and "The Power" were both added on to the re-release of this album, and both are solid additions.  Despite the fact that both are listed as being in demo form, the sound quality is still excellent and are, again, examples of the strength of Jani Lane's songwriting as opposed to the weaker, more forced moments (yes, I mean "Cherry Pie").  In my opinion, both of these songs should have made the original cut of the album in place of the the title track and "Ode To Tipper Gore".

It really is too bad that the title track and video are what people remember most from this album because if it had never been recorded, this still would have been a very good-to-great album for a band that would actually get even better on its next release, Dog Eat Dog.  As it stands, however, how you feel about Warrant as a band has a lot to do with how you view "Cherry Pie" as a song, which leaves a lot of people missing out on a pretty good album.

Rating:  Crankable, without a doubt.  Give the original a twist up to 7.5, with the reissue getting an 8 because of the excellent bonus tracks.

Back To Reviews Index
Posted by arttieTHE1manparty at 10:10 AM