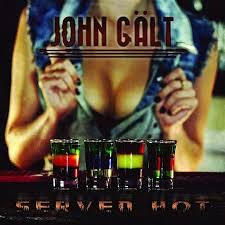 The hard-rocking boys from the Ukraine return with a full-length follow-up to the First Run EP, one of the surprise efforts of 2011.  Are they able to catch lightning in a bottle for a second time, or should they have been happy with their 15 minutes of fame?

Things start off with a short intro that really adds nothing to the rest of the album, so we will just slide past "JGS".  From there, a familiar friend returns, as the anthem rock of "Riot Radio" from First Run is given a second shot at life, and the band offers up a nearly identical version of this track (in fact, it may be the EXACT same track).  The vocal accent is still there, but so is the smoking lead guitar, the big, fist-pumping "heys", and some pretty catchy songwriting from a band that does not list English as its first language!  While mentioning the fact that "Riot Radio" is taken from the First Run EP, it should also be noted that all three actual songs from that release, including "White Widow" and "Bad Brotherhood" are included here, so if you missed the EP, you get a chance to find out what the rest of the us who caught on early were already tuned into.  These guys can flat out rock!

So what about the new material?  Does it stack up?  I'm very happy to say that, for the most part, yes.  "(One More) Punk Rock Anthem" has all the urgency of Too Fast For Love era Motley Crue as it blazes along at full-tilt, with Ostap's scratchy snarl slightly indecipherable at times, but always packed with sass and attitude.  "Undeniable" slows things down about half a step (at most), and yet another powerful hard rocker is unleashed.  I will state again what I did in my original review of the EP; these guys have that New Wave of  Swedish Sleaze and Hard Rock sound down pat, combining just enough of the Sunset Strip sound with some modern production elements, picking up where Lepard-era Crashdiet left off blasting forward.  In fact, John Galt sounds more like that first Crashdiet album does than Crashdiet does now (not bagging on the latest Crashdiet effort, either, as I love that record).

One thing I was curious about was whether or not John Galt could handle a ballad, as they didn't attempt on on their EP.  I thought they were going to answer that question for me with "Burn (Nothing In The End)", as it started off with that haunting guitar sound that Skid Row used so well on "18 And Life", but after that little tease of an intro, we get back to the chugging, pounding hard rock that has driven every song so far...and I can't say I'm disappointed, as these guys know what they do and they do it well.  Even with a simplistic chorus like the one found on "Burn...", the band and their production team layer the vocals just right, building up the sound and keeping things interesting.  And, as always, there is the excellent guitar work of Ostap and Ivan Rybnikov that are the key elements on each of these tracks.

The album closes with another new track, "On The Loose", which finds the band enlisting the aid of a vox-box guitar and using it to pretty cool, if not overly original, effect.  Another high energy rocker, this number brings a superb effort to a close and instantly has me waiting for the chance to hear new material!  In fact, it's very difficult for me to find anything negative to write about this new release, as even the one "iffy" song, "LZ Is Hot", has some far above average guitar work in it and a catchy rhythm that saves the day, although the band's limitations with the English language are particularly evident on this number.  But in all honesty, that's it; that's all the negative I can find.  One semi-off song and a less-than-spectacular grasp on American English are all that keep this from being nearly flawless.

In all fairness, mine is a promo release, so I have no idea what the final packaging will look like, but Street Symphonies generally does a very good job with their releases, so I have to guess that they will continue in this vein and that people who pick up the John Galt CD will have all the thank yous, pictures, and perhaps lyrics, that one would desire to find.

If John Galt continues in this vein, they are going to make a LOT of Scandinavian rockers...and many Americans, as well...very happy, as they get down to the business of guitar-driven hard rock, mashing their foot down on the pedal and never letting up.  No ballads may be a let down for some, but not for me when the album is done well and varies things up just enough to keep from sounding like the same song over and over and over.  This is a great way to introduce the band to the world...now I just hope the world is listening!  John Galt is for real and has vaulted themselves to the top of the mid-year pile of contenders for album of the year!

Rating:  відмінно (That's what Google Translate tells me is "excellent" in Ukranian!)  Extremely crankable, we have our first 9 of the year!