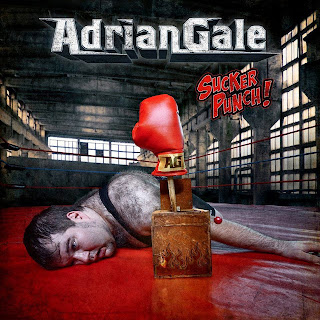 
Alright, show of hands....who can believe it has been 13 years since that first great AdrianGale record, Feel The Fire?  Okay, okay...put your hands down.  Now, who thinks that it has been FAR TOO LONG since the last record, Crunch?!  That's what I thought....

Since 2000, AdrianGale has been one of the best, if not necessarily the best known, melodic rock bands on the scene.  Featuring the vocals of Jamie Rowe (Guardian/Tempest) and the guitar talents of Vic Rivera (Poley/Rivera and a frequent collaborator with Liberty N Justice), the band has recorded off and on with various line-ups under a couple of different names (they changed their name to Crunch upon leaving Kivel Records several years ago).  Once things were set straight for the band to return to Kivel, the name was reborn and fans can once again kick back with a full album of top-notch melodic hard rock that is nearly unrivaled in the industry!  From the moment the boxing match sound effects kick off the title track, to the final fade of the piano-driven ballad, "You", it is obvious that AdrianGale has found the line-up that should push them over the top and into superstar status in the melodic rock world.

One thing I particularly like about the album is that it remains a ROCK record, not drifting into ballad territory every other song, and not trying to get all prog on me every other song.  Keyboards, while present on the disc, are used as a supporting instrument, not as the main player in any of the songs here.  The band never forgets who they are or what they are trying to accomplish on this record, which is incredibly refreshing to these ears.

It is virtually impossible to pick a favorite song here, as there are no bad songs to compare to!  "Sucker Punch!", smacks you right in the face from the outset, with the dual guitar attack of Rivera and Campbell and the vocal talents of the consistently underrated Rowe setting the tone for the rest of the record.  "The Black And Blue" backs off the pedal ever so slightly, giving Campbell a chance to really let loose on lead guitar here, keeping things "hard", but emphasizing the "melodic" a bit more.  "Give Me A Sign" is a bit more mid-tempo, with the exception of the speedy finger work that Campbell unleashes on the solo, and "What Would You Do" leads the band into the intriguing instrumental, "Temporis Intermisso".  The single, "When I Said You'd Be The One" is another melodic rocker with amazing harmony vocals and a radio-friendly pop sensibility to the hook, but the band doesn't sell out who they are to try to gain airplay.  After all, this is who AdrianGale is, a hard rocking band with a genuine knack for writing catchy hooks and intriguing riffs that nearly anyone on Top 40 radio would steal in a second....and then destroy with programming, Auto-Tuned vocals, and crappy hip-hop beats.  But I digress...

On the slower side of things, album closer, "You" is the only ballad, and it is killer.  This is just an amazing piece of music that I am willing to bet will end up being the first dance at several weddings over the next couple of years.  A simple piano line is the backbone of the song, with Jamie's soul-soaked vocals and a great, emotionally charged guitar solo placed perfectly over the top in the mix, making sure that every note of every instrument is crisp and clean and given a chance to shine.  Again, powerful lead vocals and perfectly executed backing vocals are what are going to hook so many listeners in, but at the end of the day, on this song and every other one here, it is the complete package that needs to be absorbed and appreciated.

After numerous listens and attempts to dissect the album far more than I probably should, I simply can't find anything wrong with it!  The production is top-notch, the mix is stellar...there is really just about nothing wrong with this record.  At the end of the day, this is a nearly perfect melodic hard rock record, surpassing the band's previous pinnacle, Crunch, and setting a very high bar for themselves should they choose to record again.  I don't see this album leaving my CD changer mix any time soon.

Rating:  An absolutely crankable gem!  I wasn't sure if we would see a 10 this year, but AdrianGale has delivered with the flawless Sucker Punch!

Posted by arttieTHE1manparty at 9:36 AM