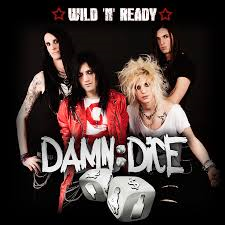 Damn Dice have been around for a bit, but until now, I have never managed to actually hear these Londoners' music in studio fashion.  Sure, I had seen the odd YouTube video here and there, and some rather raw, unprofessional live stuff was floated around, but until Wild N' Ready, I had never gotten the chance to hear what they could do if given at least a modicum of professional recording opportunity.  I'm glad I got the chance with this EP, as Damn Dice come out full throttle and don't stop clear through the end on this super-charged little album.  High pitched, falsetto vocals, rapid-fire drums, and screaming guitars abound on this effort, giving the band a sound that reminds me at times like a bit more under-control version of Nitro, especially on the title track.  On follow-up track, "Caught In The Ride", the band maintains the frenetic pace, but Alex channels his inner Bonn Scott on much of the verse work.  Regardless of the comparisons, these sleaze-meisters know how to grab you by the eardrums and rattle your cage!

The other four songs on the EP are every bit as strong as the first two, with "Take The Fight" kicking off with some sound effects before bursting right in with the big, fist-pounding anthem vocals of the bridge which then give way to some serious guitar riffing and a thunderous drum track.  "Down" is a bit dirtier sounding than the rest, with more bottom end and guitars that sound a bit down-tuned, but the angst works well, especially this far into the album.  Chanted backing vocals keep this track from becoming too dark, however, giving the track something of a pissed off Skid Row feel, although Alex's vocals keep the track from sounding even remotely like a clone cut.  "Heart On The Run" is likely the "big" single from this effort (which is laughable since radio won't play this style of rock now), while "Wild Into The Night" sends the album to a screaming, screeching close with more high-speed headbanging energy.  Sadly, not even 30 minutes later it's all over and you find yourself saying, "what?!  That's it?!"

The production is top-notch, especially when it's considered that this is an indie effort, and the mix is superb, with no muddiness or problems with instruments crowding each other out.  The vocals are nicely out front, but not overbearing, and the drums and bass are given every bit as much chance to be heard as the powerful guitars.

Yet another great 80's inspired band in a long line to come out in recent years, Damn Dice comes out ready to prove something from the get-go...and they get it done.  Seek this one out folks; you won't be disappointed.  As always, if you can, support the band directly by ordering from them at www.damndice.com .

Rating:  Short, sweet, and to the point...crank this to 8 and hope that a full-length effort and a record deal aren't far behind.

Back To Reviews Index﻿
Posted by arttieTHE1manparty at 10:13 AM