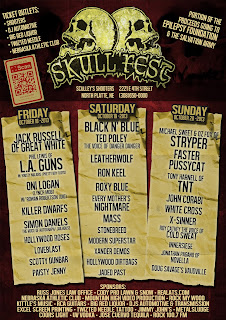 North Platte, NE may have been an odd choice (for some people) for a hard rock festival to be held, but from October 18 through October 20, 2013, nearly 30 bands gathered together with hundreds of fans from across the country, Canada, and Russia, to celebrate their common love of music.  Among the most popular of the shows was the Christian hard rock group, Whitecross, who performed a powerful set of their classic favorites.
﻿
Band founders Rex Carroll (guitar) and Scott Wenzel (vocals), along with long-time drummer, Michael Feighan, and bass player Benny Ramos, fired up the crowd from the opening notes of "Enough Is Enough", and not letting up until the final chords of "He Is The Rock" rang out.  While all of the songs were likely not familiar to many of the concert-goers, one thing that was universal was the love of a killer guitar solo, and Rex Carroll did not disappoint!  Whether ripping through the individual solos of the songs, or when he was threatening to melt the strings from his guitar during his extended guitar solo, Carroll left the fans cheering and screaming for more.  Likewise, Feighan's drum solo was something to not only hear, but listen to as well, as he seemingly took a page from Robert Sweet's (Stryper) book and turned his drum solo into a full-on spectacle for the eyes and ears! 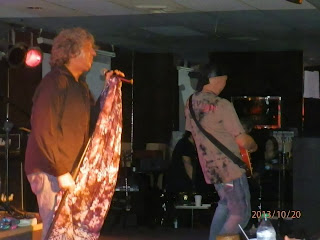 One thing that I was particularly happy about was the fact that Wenzel did not water down his message from the stage, repeatedly making reference to the love of God and Jesus, even on the couple of minor occasions when one or two individuals in the crowd were less than appreciative in their response.  While it is true that this was a rock show, the fact that Sunday's line-up included multiple Christian acts (Whitecross, Inner Siege, Jonathan Pagano of Novella, X-Sinner, and Michael Sweet and Oz Fox of Stryper) was a good indicator that these bands' faith was welcomed by the promoters (including yours truly).  Add in the fact that attendance for Sunday was better than that of Friday (headlined by Jack Russell of Great White), perhaps it could be said that many of the Sunday fans came specifically to hear these Christian artists who don't frequently get added to festivals such as this. 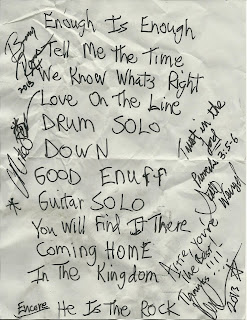 The material for the show leaned heavily on the band's most popular album, In The Kingdom, with "Tell Me The Time", "We Know What's Right", "Good Enough", "You Will Find It There", and the title track all finding their way into the setlist.  Also included was the rare, "Love On The Line", as well as "Enough Is Enough" and "He Is The Rock", both taken from the band's 1987 self-titled debut.  As is always the case, there are a couple of songs that I wish could have made it into the show, with "High Gear", "Red Light", and "Shakedown" being at the top of my wish list, but the entire 65 minutes was filled with powerful music with an even more powerful message, so my complaints are minimal.  One thing I was happy about, however, was the decision to not include any ballads.  (Granted, "In The Kingdom" is a slower song, but I don't really consider it to be a true ballad.)  I have never been a huge fan of Whitecross' ballads, largely because I didn't feel the production on them was "big enough", if that makes sense.  If I had to pick a favorite song (or couple of songs) from the show, I would have to go with "Love On The Line", simply because it is rare enough on CD, let alone to get to hear live, and "Down" and "Enough Is Enough" have always been favorite songs in any setting.  Of course, not including the drum solo and guitar solo as high points would be ridiculous, so perhaps NOT picking a favorite moment would be easier...
Wenzel's voice was far better than his performance on a couple of YouTube clips that have surfaced, and he sounded spot-on for the majority of the tracks.  Ramos' bass lines were clean and distinct in the mix, providing a perfect accompaniment to Feighan's thundering drumming.  However, to deny that Carroll was the focal point for most would be to deny the truth, as the axeman's skills remain at an incredibly high level, and his performance left more than one attendee slack-jawed and screaming for more.  While Carroll is more commonly found with his other band, King James, or his side blues project, it goes without saying that if you get the chance to catch the Whitecross in a live setting, you should do so without hesitation.  In this reviewer's opinion, you will not be disappointed.
﻿