STRYPER "No More Hell To Pay" 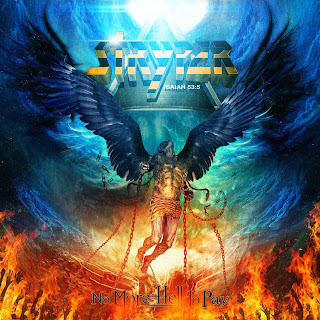 For those who may have been trapped in some sort of maximum security facility without access to the Internet, it is worth noting that Stryper has a new album, and they are back in a big way!  In fact, no matter who you are, if you are into the band, their message, their sound, their style...whatever...it is definitely worth noting that No More Hell To Pay has been unleashed upon the waiting masses and it brings a massive sound with it!

Many fans of the band have been less than thrilled with the past few Stryper releases, whether it be the more modern approach taken on albums like Reborn and Murder By Pride, the covers album, The Covering, or the re-recorded classics album, Second Coming.  While each of these albums had their weaknesses, to be sure, fans always held out hope that the classic Stryper song would reappear in full, much as it did with the new track, "God", which appeared on The Covering.

Stryper has returned to their melodic hard rock/metal roots with their finest album since the classic To Hell With The Devil.  This album finally feels like a truly Stryper album, and not an album of Michael Sweet solo songs performed by the band.  One needs only to listen to the album's opener, "Revelation", to be instantly blasted by the dual guitar sound that Fox and Sweet showcased so often throughout the band's strongest material from the 80's.  The same can be said of the title track, "No More Hell To Pay", along with nearly every other song here.  But what really makes this record shine as a Stryper disc, even more than the trademark guitar sound, are the vocal harmonies that were missing when Gaines was not in the band, as well as the killer production and the hook-infused songwriting.  Sure, there were some good songs on the last couple of albums, but it has been a long time since the band sounded as Stryper-ish as they do on the groove-heavy "Water Into Wine" or the stellar "Sticks & Stones".  Heck, even the remake of the classic "Jesus Is Just Alright" is treated like it is owned by the band!  The sound is pure Stryper despite the band remaining true to the basic sound and feel of the original.

Not simply satisfied to re-create the sound of their glory years, Stryper takes its most metallic approach to a song in decades with the gritty "Saved By Love" that finds the golden-throated Michael Sweet...*
gasp*...growling!  The snarl in his voice as he tears through the chorus is unmistakable, yet even in these vocally aggressive moments, there is not a feeling that he is compensating for the loss of power or range.  This is even more obvious in other songs, as it sounds to this reviewer's ears as if Michael has every bit of the vocal range he possessed in the 1980's, without an ounce of power missing from those vocal chords.  And, having had the opportunity to hear Michael (with Oz on guitar) in an acoustic setting just a couple of weeks ago at Skull Fest, I can attest to the fact that it is not studio wizardry that keeps Michael sounding strong here, as he was in great vocal shape in person, as well.

There are a couple of moments that don't really reach out and grab me, for various reasons.  One, the song "Marching Into Battle" just doesn't do much of anything for me, especially with the sluggish-sounding chorus.  Not sure what that is all about, but it hasn't forced me to hit the skip button...yet.  The other song I find myself struggling to like is "The One", which is the closest thing to a ballad the band really gives us here.  The vast majority of the song is fine, and I actually find myself liking it...right up to the "ooh ooh eee oohs" of the chorus.  WOW!  Umm...no thanks.  Seriously, I really like this song except for those chorus parts which just about cause the skip finger to explode off of my hand in its mad dash to the control panel of my CD player or iPod!  The greatness of the rest of the song has caused me to sit on my free hand while I am driving, but I am fearful that too many more spins through that chorus will have me veering off into the ditch as I fight to keep my finger from leaping across the steering wheel at the disc changer!

The weak moments are few and the greatness is over-flowing here, so I can (probably) manage to get through these minor bumps in the road, especially when a classic-sounding Stryper track, complete with a big, sing along chorus, such as that on the non-Spanish (thankfully for me) "Te Amo" keeps me happily bopping along.  The same can be said of the metallic face-melter, "Legacy", or the album closing "Renewed", both of which contribute more signature Stryper guitars and big melodic vocals.  "Sympathy", which is not even remotely as laid back as the title might suggest, is another stand-out rocker that I find myself nodding my head along with.

All of the originals are back for this effort, and, if interviews and album credits are to be believed, all of the members played their respective instruments throughout this effort, which makes it that much more special for me, as this has (reportedly) not always been the case through the years.  The guitars, as previously mentioned, are especially strong on this record, but the backline of Robert Sweet and Tim Gaines is exceptionally tight, providing each song with a solid framework to build upon.

Having not had the chance to see the full band in concert, I am not sure what songs from this disc make it into the new live set, but there are many that could and should.  I would be surprised if "Te Amo", "No More Hell To Pay", "Sticks & Stones", and "Water Into Wine" aren't mixed in, and "Revelation", "Sympath" and "Saved By Love" all would sound great surrounded by classics as well.  And, I am almost positive "Jesus Is Just Alright" will be mixed in with a track or two from The Covering.

Unlike a lot of Frontiers Records' releases, this album did not come in a digi-pack, but rather in a jewel case, with full artwork and inserts.  I did not get the deluxe edition as I am not a fan of DVD's being added to a package such as this, so I do not know what type of packaging that comes in, but my guess is that those particular versions are likely digi-packs.

In the end, whether you are a fan of Stryper, or just melodic hard rock/metal in general, there is virtually nothing to keep you from instantly launching this album into the top ten of the year.  Amazing vocals, near-perfect guitar work, exceptional songwriting, and 80's-inspired-yet-still-modern production equate to an almost perfect album.  A couple of choruses are really all that stand between No More Hell To Pay and that coveted 10, so I guess Stryper will need to come back and try again.  Until then, make sure you snap this record up...IMMEDIATELY, if not sooner!

Rating:  Just a couple of "ooh ooh eee ooh's" away from perfection.  Crank this baby up to 9!!!  All hail the return of the Yellow and Black Attack!