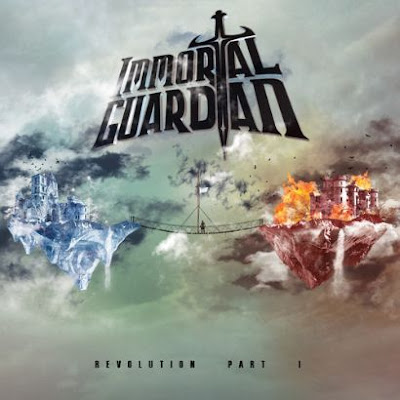 Okay, so I was sent this EP for review, and I honestly paid very little attention to it at first.  Yeah, the artwork was cool and all, but I just didn't feel particularly inspired to pop it into the player and give it a spin.  But then, one rainy day, I thought, "What the heck", and put Revolution Part I in for a spin.  To say I was taken completely by surprise would be an understatement.  Then, when I read these guys were from Texas, it is the understatement of the year to say I was completely blown away!

Immortal Guardian play Euro power/speed metal in the vein of such names as Helloween, Blind Guardian, Beyond Twilight, Demons & Wizards, Dragonforce and the like.  BUT THEY ARE FROM TEXAS, PEOPLE!!!  (I honestly can't overstate that fact, even if its for my own reminding...)

First off, the music is just blistering fast from start to finish, with very little in the way of a slow down moment through out the five tracks included here.  Honestly, when I hear music like this, I have no idea how fingers can move so quickly up and down a guitar's neck and still find the notes they are seeking, because this borders on the insane at times.  Add in the lightning fast drumming and I'm not sure that my heartrate wasn't altered simply by listening to this EP!  On top of all of this...and some excellent bass playing as well, mind you...Carlos Zema has one of those voices that can sing, growl (in limited quantities), and scream, all seemingly at maximum quality and volume with minimal effort, often times within the same song.  (I have since read that Zema is not the original vocalist and that his power metal approach is actually something of a departure from a more gutteral, growling style incorporated by previous vocalists, but I am not familiar with them...)

The album launches from the speakers with "Beyond The Skies", which quickly drew a parallel to Blind Guardian for me.  The huge, layered backing vocals power this rather uplifting track that features Zema pretty much running the gamut as far as vocal styles go, starting off with high pitched, melodic screams then dropping down into more of an edgy tenor range on the verses, then elevating the pitch and vibrato once again to join the harmony vocals on the chorus.  The drumming here is so fast it borders on grindcore speed at times, and the insane amount of guitar notes that are picked per measure just blows my mind.  In terms of sheer note density, I can't say that I have come across a band with so much going on since some of Theocracy's material.  Shred is almost too tame of a word for the speed involved here, but it is also almost a dirty word when describing Immortal Guardian's sound, as this is not guitar-bation simply for wankery's sake; the solos, intricate and blazing, are well-placed and serve to enhance the song, not the other way around.

"Walk Alone" starts off a bit more slowly than its predecessor with more of an orchestral buildup interrupted occasionally by psycho bursts of guitar and drum speed and the occasional tinkling of a piano.  Zema again trends toward the lower end of his register, adding a bit of snarl to his vocals on the verses, then elevates and absolutely tears into the high-pitched screams so many people associate with this style of power metal.

"Immortal" starts off with a very scratchy-sounding vinyl approach for an intro, with a piano and Zema's voice being all that is utilized here for instruments.  Slowly the music clears up as Zema builds into a power scream and Guardian's guitars come sweeping in, backed by Gilliland's sprinter-styled drumming and a pummeling bass line.  Roy Z, himself, gets in on the action here, delivering his own scorching solo, although I will be 100% candid in stating that I don't think even the mighty Z holds a candle to the fire and fury that Guardian displays throughout this disc.

"Between Fire And Ice" must have been a rest-point for Gilliland, in particular, as this is the slowest number on the EP.  Sporting a strong piano line, big, splashy, punchy orchestration, more Blind Guardian-esque backing vocals, and Zema spending the majority of his time in the lower tenor range, this song really serves to showcase the fact that this band is more than just a musical treadmill jacked to maximum speed and endlessly looping the same types of riffs, solos, drum fills, and keyboard interludes over and over.  No, "Between Fire And Ice" showcases strong songwriting skills and an understanding of the fact that as dazzling as speed can be, there comes a time when you start to appear to be a one-trick pony if the only way you know how to play is full-speed ahead.

Album closer "Victory Shore" returns to a quicker pace, although the band remains at least somewhat restrained at the beginning of this six-minute long track.  Zema incorporates some harsher, almost barked vocals for part of the verses, but they are rather short in nature and don't detract from the melodic speed metal majesty of the track as a whole.  Once again, Guardian unleashes a searing solo with some absolute breakneck drumming on the part of Gilliland, whom I imagine must lose 8-10 pounds of sweat per show, just based on the music on this EP.

After listening to this entire EP several times through, it becomes immediately obvious why worldwide names such as Judas Priest, Dragonforce, Metal Church, Kamelot, Symphony X, and even Slayer, have called upon this indie Texas band to open for them, as their talent is massive.  I do wonder if some of these bands changed their minds upon seeing the fury of Immortal Guardian unleashed at hyperdrive speed live, because I'm quite sure many new fans were made and some older fans of the headliners may have turned to their heroes with questions of "soooo....can you top THAT?!"

Mixed by Roy Z., my only complaint is that the bass feels a bit lost in the mix at times, perhaps due to the overwhelming amount of guitar that fills these songs.  The keys are not heavily out in front, which is always a pet peeve of mine, and Zema blends perfectly into these songs rather than trouncing over the top of the rest of the band.  Very nicely done, especially for an indie project.

Absolutely not what I was expecting, and something that I am glad I coaxed myself into giving a chance to.  If you are into the Euro power sounds of Blind Guardian, Kamelot, Hammerfall, and all of those other Eurocentric power metal/speed metal bands, whom I admittedly am not overly well-versed in, I would imagine you will fall in love with Immortal Guardian's new direction and sound on Revolution Part I.  Do NOT plan on using this EP for relaxation purposes, however, as your pulse rate will be JACKED upon completion of this fret-melting scorcher that I am certain involved the loss of blood and possibly consciousness while being created!

Rating:  Shockingly crankable.  A bit short at just over 26 minutes, but relentless in its execution.  Crank this to 8!

Back to Reviews Index
Posted by arttieTHE1manparty at 1:35 PM