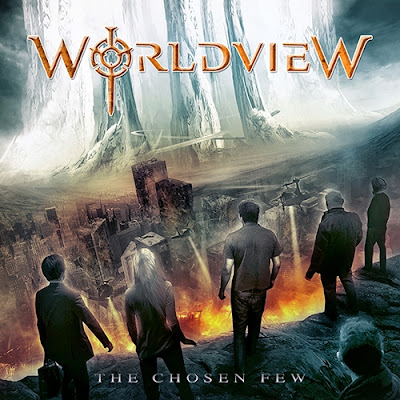 There have been rumors and rumblings about this band since at least mid-2014, and some may have heard hints and allegations about Worldview as far back as 2013, but now that 2015 has slipped halfway into the past, The Chosen Few is finally here!  Created out of a mutual friendship, a musical idea, and an untimely passing, Worldview is what I think could only be referred to as a melodic progressive power metal band featuring Rey Parra, the former vocalist of Christian power metal pioneers, Sacred Warrior, and the monstrous guitar talent of Deliverance/Recon shredder, George Ochoa.  With the addition of an extremely talented, if not-as-well-known rhythm section of Todd Libby and Johnny Gonzalez (who also played with Recon and Deliverance), and a fistful of their good friends from multiple Christian metal bands from the 80's and 90's, Worldview is what many people may be tempted to label a "supergroup", but I will shy away from such a tag, as that suggests this is a one-and-done project, which I am truly hoping it is not!

For those who have not yet heard or read, the backstory to this band is that Sacred Warrior keyboard player, Rick Macias, had held onto the goal of one day getting his mutual friends Rey Parra and George Ochoa together on a project with him.  Sadly, Macias passed away in 2009, but his dream did not, as Parra and Ochoa kept the idea alive, eventually collaborating on the very album being reviewed today.

Right from the get-go, it is obvious that this is not an album that the players put together in hopes of garnering radio airplay, as no station that I am aware of plays this style of metal now.  And, while I am admittedly and unashamedly a fan of a lot of the modern hard rock that passes for "metal" on radio today, all would be well-served to give The Chosen Few a listen and take notes on song structure and design.  Additionally, I would caution listeners that this album is NOT Sacred Warrior meets Deliverance, because there is no Deliverance speed/thrash element, nor is there the 80's-styled, Queensryche-inspired, progressive power metal of Sacred Warrior.  Instead what we have here is more of a Euro-styled power metal album with progressive metal elements...and some classic rock tossed in for good measure...creating a familiar, yet not redundant musical landscape for the artists involved to contribute their own individual talents and tastes to.

Pinning the band down to one specific style or sound is going to be difficult, as there is enough diversity here to keep the band from sounding like anyone but Worldview.  Take for example the opening track, "Mortality", a power chord-laden rocker, which mixes in a Middle Eastern sounds and tempos with heavy guitars and layered vocals, and then compare it to "The Chosen Few", which is a powerful, emotive, piano-driven ballad featuring beautiful female backing vocals, Les Carlson's easily identifiable bridge vocals, a scorching Ochoa guitar solo, and a message that nearly echoes the album opener's, yet presents it in a completely different style.  "Back In Time" starts off with a mournful-sounding violin intro, before the rest of the song launches into full blown melodic progressive metal, treading closely to what Sacred Warrior did in the past, feeling almost like a Tate-era Queensryche song, but never retreating from the more modern European sound that is incorporated throughout much of the disc.  "Why?" sports one of the best bass lines of the album, propping up the track by mixing with just enough keyboard to keep the track atmospheric without becoming an ambiant musical mess, until the melodic guitar solo kicks in...albeit in rather short fashion.  "The Last Cry" and "Walk Through Fire" are both superbly heavy numbers, but "The Last Cry" derives its power from thunderous power chords, double bass drum kicks, and Parra's smooth, operatic style intermixed with power screams backed by layered harmonies, while "Walk Through Fire" utilizes chunkier, classic rock rhythm guitars, a simpler drum approach with a heavier bass line, keys and a piano to support and a more 80's-styled vocal approach.  It all flows together marvelously, yet its difficult to say that one particular style of metal/hard rock is the defining style throughout.

My biggest concern with the project was how would Parra sound?  I have always been a huge fan of his powerful, almost operatic style of delivery, but as we all know, a lot of singers lose range and power with the passage of years.  However, perhaps due to his lay-off from the musical world, Parra is every bit the powerhouse vocalist I remember, picking up right where he left off with his last Sacred Warrior album, Obsessions.  Parra never really stretches into full-on Tate-inspired screaming here, but the songs don't call for it, either.  He does, however, utilize a powerful vibrato in multiple places throughout the record, holding notes for extended stretches and more restrained screams (check out "Illusions of Love" for an example), exhibiting a true control of his vocal instrument.

Ochoa shows that he hasn't lost a step, either, although his style has changed just a bit here.  There is no "shredding" per se, on this record, but there are tons of powerful, melodic metal solos that hearken back to the best stuff he recorded with Deliverance and Recon.  The duel between Ochoa and Farkas on "Prisoner Of Pain" (which I will detail a bit more in a second), is a prime example of George's mastery of the melodic-yet-stinking-heavy style he has honed throughout the years.  "The Mirror" features another monster solo that is not to be missed, as does album closer, "The Last Cry".

Stand out tracks are just about impossible to choose, because nothing here is weak, nothing is bad, and all are well-crafted songs.  Off the top of my head, I will say that "Prisoner Of Pain" is a monster of a song, with guest axe-slinger, Larry Farkas, pulling out all the stops on his solo, throwing down the gauntlet for Ochoa, who accepts the challenge with his own smoldering solo.  Throw in some Led Zeppelin "Immigrant Song" backing vocals, the right mixture of classic rock keyboard fill to balance things out, and a HUGE drum sound, and this is one of the best power/progressive METAL songs I have heard in quite some time.  Love, love, love this song!  The haunting title track is another song that just stays with me every time I listen to it, as does album closer, "The Last Cry", which is just an amazing piece of heavy rock with so many different textures and styles all blended into one track.  I also love the chugga-chugga rhythm and rumbling bass line of one of the album's hardest hitters, "Illusions Of Love".  It's just so hard to pick the best moment on an album full of nothing but good moments.

Honestly, I have no complaints at all here, as there is literally nothing I would change about this album.  Everything from the performances to the songwriting to the production to the packaging is spot-on.  The guest spots merely add to the project, never threatening to take over, and the mix, done by the legendary Bill Metoyer is flawless for this style of music.  Why can't more bands pour the time, effort, and passion into their albums and churn out masterpieces such as this?  If they did, one has to wonder if metal wouldn't make a bit more of a return, especially in the United States (Europe still appreciates true metal talent).

Ratng:  Truly a fabulous collection of crankable music!  Torque it all the way to 9 for this amazing debut!  I have not been this happy with a complete album in some time.