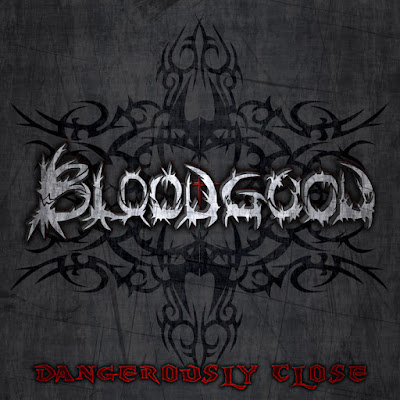 If you have been awake at all for the past 8-10 years, it has become obvious that everything old is new again in the music world.  80's bands are enjoying a resurrection of sorts, playing to large crowds and festivals across the country, even if they aren't able to crack the Billboard charts any longer.  Bands seem to be reuniting on a regular basis these past several years, and new albums are coming out of nowhere from bands that many people had long-since written off.

The same phenomenon has occurred in the Christian hard rock and metal market as well.  Recent releases by Stryper, Saint, Barren Cross, Deliverance, Guardian, Tourniquet, and others, have shown that there is still a market for many of these so-called "legacy" bands to put out new material and possibly take one more run at getting out there to see their fans in live settings.  Add Bloodgood to the mix of bands taking at least one more stab at adding to their already rather significant legacy within the Christian hard rock and metal community.

Twenty-two years had passed since Bloodgood released what was their most commercial, and at least to me, their most complete album, All Stand Together, WAY back in 1991.  Prior to that, the band released several albums to fairly high amounts of acclaim, particularly with their much more metallic-sounding album, Detonation (1987), and 1988's Rock In A Hard Place.  But All Stand Together seemed to be the band's first real stab at making any kind of attempt to grab some of the mainstream melodic hard rock/hair metal market of the late 80's/early 90's...and it failed.  Personally, I love the album, but it is definitely an album that seemed to divide the band's fanbase and actually had the opposite effect that I felt it should have.  Instead of making them more popular, the band promptly disappeared, never to be heard from again....

Until 2013.  Seemingly out of nowhere, Bloodgood showed up on Kickstarter with a plan for not only a new album, but also a career-spanning documentary film (which will hopefully see the light of day now in 2015).  In addition to returning with some of the strongest material...and some of the heavier material in several albums...the band also returned with their Out Of The Darkness album line-up along with a new friend to help them out on guitar, as Oz Fox of Stryper fame not only recorded the album, but also became a full-fledged member of the band.

From the second the CD starts playing, it is evident that even though 20+ years have passed, the musical ability of the band is still very much intact.  Closer to the more metallic-natured material of their earlier albums, Dangerously Close comes out swinging right from the start with "Lamb Of God", which is probably the most "radio friendly" track here.  Whisler's drums kick the track off before a gritty guitar track enters, matched in grittiness by the love-'em-or-hate-'em vocals of Mr. Les Carlsen, who sounds literally EXACTLY like he did all those years ago.  Not to be overshadowed by his more-famous guitar partner, Paul Jackson rips into a tasty solo just before the bridge of the song, showing that he has the chops to carry the guitar load if necessary.  Also obvious on this song (and throughout the album) is a MUCH stronger bottom end than had been present on the last few Bloodgood discs, courtesy of the band's namesake member, Michael Bloodgood.  (Honestly, I always found it odd the bass was typically mixed so low in the band's previous releases considering the bass player was the founding member and the guy the band is named after...)

"Run Away" again sports a chunky bass groove and a strong melodic sensibility throughout, again utilizing a solo from Jackson and a spoken/whispered word section from Carlsen to really establish an urgency to the mood of the track.  Interestingly, this song was also co-written by another former long-time member of the band, David Zaffiro, who also mastered the record, really giving this album a full "family reunion" feel to it.

"Child On Earth" has a killer classic 70's metallic vibe to it right from the outset, conjuring up a doomy, sludgy style that is really given a haunting quality when Carlsen sing/chants "amen" as part of the chorus.  This song is also the first to give Fox a chance to step up to the guitar solo podium, and he does not disappoint, as he lays down a smoldering solo, but one that fits with this song and this band, not one that is reminiscent of anything Stryper has done in the past.  No rehashed work from Fox on this track, just good, good stuff here.  Carlsen also shows that he is more than capable of still reaching the upper-ends of his register with ease, never sounding strained...and certainly not auto-tuned...when he cuts loose with a scream, or when he drops into lower register, either, for that matter.

"I Will" slithers directly out of "Child On Earth", using a slightly middle-eastern sound to the guitar licks that kick off the song.  This is one of my favorite tracks on the album, although it is not one that I have seen given much love by other reviews or when I read fans talking about the album.  I think Carlsen sounds especially strong here, with a powerful vibrato utilized when necessary on the chorus, and a really nice solo from Jackson that sounds like it was actually recorded twice and layered ever so slightly to give it that Maiden-esque twin guitar feel.

"Bread Alone" features some excellent double-kick work from Whisler, and on this track Oz's backing vocals are the most noticeable to me.  Straight forward American heavy metal is the order of the day on this number and the band serves it in top notch fashion.

Without breaking the rest of the record down on a track-by-track basis, it is safe to say that the rest of the album is as good, or nearly so, as the first half of the disc.  Three tracks, "Run The Race", "Father, Father", and "Man In The Middle" all feature solos from both Jackson and Fox, and, as you may expect, all are really well-crafted.  In fact, "Man In The Middle", with its tribal drum intro and aggressive rhythm guitar section, would possibly steal the honors as best song on the album if it weren't for the powerful, plodding metal of album closer, "In The Trenches".  "Pray" sports a killer "chugga-chugga" riff and some thunderous drumming to drive the simple-yet-punchy track along until it collides head-long with one of Jackson's best solos.

Despite being a more metal-edged band than many in the 80's Christian world, Bloodgood has never shied away from the occasional ballad, and they don't change formulas on Dangerously Close.  "I Can Hold On" is the first slower moment on the record, featuring a blusier take on a classic rock ballad.  Don't think "power ballad" because that is not what this is; think 70's classic rock ballad with no keys, no acoustic interludes, or any of that other fluff that all to often found its way into 80's ballads.  "Father, Father", which I mentioned before, also features a bluesy feel to it, but it takes a more 80's top-40 rock ballad approach than the classic rock vibe of "I Can...".

If I had to pick one song that doesn't do a lot for me it would be the third ballad, the mistitled (in my opinion) "Crush Me".  Rather than a smack-you-in-the-mouth metal song, this is an acoustic ballad that just doesn't grab me.  It is nicely played and Les pours his soul into his vocal performance, as he has always done on his ballads, but this one just feels like it is missing something.

The packaging is decent, if not spectacular.  The inner sleeve is a tri-fold with writing credits, guitar solo credits, and a brief thank-you section, as well as a section for the higher-end Kickstarter supporters.  A single band group photo is included, as is a rather artistic shot of the band's guitars, bass, drums, and microphone.  The back cover of the tray insert also features a different full-color photo of the band.  No lyrics are included.

Produced by Jackson, co-produced by Bloodgood and Carlsen, mixed by Mark Simmons, and mastered by David Zaffiro, the sound on the record is top-notch throughout.  As I said, it is really nice to hear a Bloodgood record with a solid bottom end, and the separation of instruments is clear with no muddiness at all.

If this is the book-end on this classic Christian metal outfit's career, it is definitely a solid one and shows a band going out on a high point.  If it is NOT the end (and greedy me, I hope it's not), I can honestly say I am more than anxious to hear how Bloodgood follows up a stellar return to form.

Rating:  ALL puns intended, Dangerously Close is dangerously close to the best this band has ever recorded.  Crank this to an 8.5.

Back To Reviews Index
Posted by arttieTHE1manparty at 4:55 PM