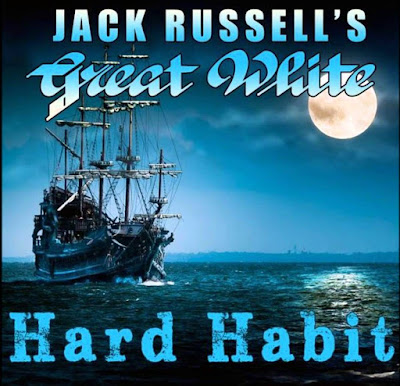 Man, oh man, am I gonna hate it if this is the way Jack is going to go about releasing music now!!!  I am simply NOT a digital singles kinda guy.  What I AM, however, is a monster Great White fan and collector, so I had no choice but to download this song when I found out about it, and I'm glad I did.

"Hard Habit" is the first single release by Jack Russell's Great White, the now legally-named version of the band headed up by the band's iconic lead singer and now featuring the return of Tony Montana.  Montana, you may recall, was with the band during the height of their industry success, playing bass on both Once Bitten... and ...Twice Shy, as well as on their Live In London import EP, and the massively underrated, Hooked.  Montana returns to the fold, but now as a guitar player and keyboardist, which is an interesting turn.  Also in the band is Jack's longtime guitar side-kick, Robbie Lochner, and newcomers Tristam and Fliszar on bass and drums, respectively.

"Hard Habit" is pure late-era Great White, no bones about it.  The bass-thumping shuffle of the music, the bluesy slide of the guitars, the sassy rasp of Jack's voice, and the classic phrasing of the lyrics leave absolutely ZERO doubt as to who is performing this track that could have slotted in nicely on Can't Get There From Here or Back To The Rhythm, back before the band fractured.  Is this the best Great White song ever?  No...but it's better than anything the non-Jack version has released, and would have been one of the strongest tracks on the last couple of full-band efforts.  As it stands, this is a nice re-introduction of Jack's version of the band, a nice return for Montana, and REPORTEDLY (we'll have to see) the first single off of a Jack Russell's Great White album (rumored to be tentatively titled Gauntlet).  For now, I'll put it into the mix of my recent favorites from a band that I have loved for so long that I simply can't let go of them.  And, in all fairness, "Hard Habit" is a good song to hold on to if you are a fan of the band's more classic sound, because Mark Kendall's version of the band seems to have forgotten what Great White was all about from about 1991 through the Back To The Rhythm era.

Rating:  I don't rate singles, but I would encourage fans of Great White to snag this on iTunes or Amazon and check it out.  Definitely not going to disappoint fans of Jack Russell or Great White.