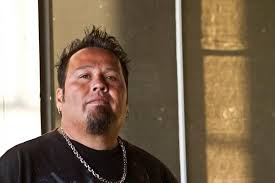 Rey Parra, the former lead singer of Sacred Warrior, one of the first true power metal bands in the Christian metal scene, has returned to the music scene with a brand new band, a brand new album, and a brand new interview here on Glitter2Gutter!  Hang on as Rey talks about his new band, Worldview, hanging with the guys from Bloodgood and Vengeance Rising, the state of the Christian music scene today, and what it's like to work with a legendary guitar player like George Ochoa!


G2G:  Rey, first I want to thank you for taking the time to do this interview!  You are definitely one of the main voices behind a very important part of my teen-aged years...

G2G:  So, Worldview has FINALLY dropped...and to extremely good reviews thus far (see the G2G review HERE).  How does it feel to finally have it out there?

Rey:  Arttie, it's such a blessing to see how well people have empbraced our music.  We believed it would be a great album, but never did we dream of getting such great reviews.

G2G:  This is a project that, in a sense, has been in the making for 6 or 7 years now, right?  I mean, going back to Rick's initial desire to get you and George Ochoa together, correct?

G2G:  Can you talk a little bit about how the idea was presented to you?

Rey:  No!  (Laughing)  Just kidding.  In 2007, Rick and I worked in San Antonio, Texas.  Rick lived there and I actually stayed with him for 7 months or so.  During those months, we often spoke of doing some music outside of Sacred Warrior.  Rick came up with the idea of collaborating with George Ochoa.  We toyed with the idea every once and awhile, but we never really got serious about pursuing it.  Some years later, Rick came to Florida to visit me.  I remember it was a Friday night and Rick told me he was going to visit some friends in Orlando but he would be back on Sunday for church.  He never made it back; he died on Sunday.  After that, I contacted Ochoa and told him that I thought it would be a good idea to fulfill Rick's dream of us working together.

G2G:  Did you previously know George, or just know OF him?

Rey:  Yes, we had done some shows together...

G2G:  I have to tell you, in my teenage naivete, I had this vision of there being this big "Intense Records club" of sorts, where automatically Sacred Warrior and Deliverance and Vengeance Rising, Bloodgood, whomever...Angelica, Tourniquet...you all just knew each other and hung out all the time....

Rey:  Actually, we are all friends.  Good friends.  We hook up whenever we can.  The other guys actually see each other more than I do 'cause they are all in Cali and I'm in Florida.

G2G:  Interesting.  That kind of brings me to my next question...  How did the recording process for Worldview work?  Did you have to go to California for recording sessions or did technology play a big part in getting the record put together?

Rey:  Yes, I flew to Cali several times for the final tracks, but we did collaborate through technology.

G2G:  So did you each come in with some song ideas and just collaborate taht way?  I noticed George listed on all of the tracks, but you contributed to some of the songs as well...

Rey:  George had most of the stuff mostly written, then I came along and added my flavor and also helped make changes.  But, I would have to give George most of the credit for writing.  He has a great way of seeing the end product.  There were several times when I called George and told him that a certain part did not appeal to me.  I also helped in the arrangement of some of the songs.  But, yeah, George is the mastermind behind Worldview songs.  What I brought was my instrument: my voice.

G2G:  So did you have any doubt that you still could "bring it" vocally?  Did you have to work your way back into "rock" shape?

Rey:  I'm going to say this as humbly as I can.  No, I had no doubts.  I told the Lord that as long as He continues to bless me with a voice, I will always use it for His glory.  Yes, I did have to bring out the vocal scales and breathing exercises, though.  But I never doubted my ability to sing again.  I continually protect my vouce and I try to keep it in good shape.

G2G:  After you left Sacred Warrior, did you ever feel like, "Well, that's it.  God must have something else in mind for me because I just don't see the band thing or recording thing happening again"?

Rey:  Not at all, bro.  I decided to leave Sacred Warrior, but it was because I was burnt out from being on the road.  I continued to sing, but at my church, Calvary Christian Center.  I believed I would record again, but I did not know at what level.


G2G:  Well, you certainly still have the power to your voice, which I have always said was one of my favorites.  At least vocally, it sounds to me like this could have been done not that long after Obsessions, so that's amazing to me.

G2G:  I've probably listened to The Chosen Few a dozen times or more now, and I'm thoroughly amazed at the overall product.  What I noticed a lot is that contrary to what many people might have expected, this isn't Sacred Warrior 2 or Recon 2.  Worldview is its own band with its own style.  Was that a conscious decision?

Rey:  Absolutely.  Yes, it definitely was...


G2G:  How important is the message of a song for you?  Not that you would ever go out and start singing Slayer songs or anything, but how direct do you want your lyrics to be when you are putting a song together?

Rey:  I want God to get the glory for my singing, not me.  But, I also want to write songs about real life issues.  People will always hear God's heart through our lyrics and songs, but they will also be entertained.

G2G:  That's a great point you make.  I was just reading something on Facebook the other day that another prominent Christian rock artist had posted about the Christian music scene changing so much in the past few years.  One point that was made in the thread by several people was that Christian bands frequently write lyrics now that are so generic they could be about anything.

Rey:  So true.  Times have definitely changed, but I believe that Christians also want good music.  Not every song has to be a turn or burn song.  You see, if people know who you are and what you believe and hold true to your heart, they aren't going to question what your songs are about.  If we, as Christians, can't have entertainment from Christian bands and artists, they (Christians) will probably get it from the world.

G2G:  Do Christian bands also have to be mindful of turning people away by being too focused on, as you referred to them, "turn or burn" lyrics?

Rey:  I don't think so.  There are people who really just want ministry-type songs.  They hold onto those lyrics and embrace the concept of turn or burn lyrics, so its good...but it's not for everyone.  I'm not saying water down the message.  You can hear with our songs "Last Cry" and "Two Wonders" that we are definitely strong about our love for Christ but not every song on the album is like that. 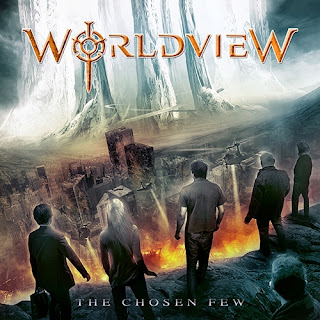 G2G:  I absolutely love "Last Cry", which is one of my favorites on the album, for sure.  That brings me to my next question, which a lot of people tell me is unfair, but I'm going to ask it anyway.  Most people tell me it's like trying to choose between children, but if you had to choose two or three songs that really stand out for you from The Chosen Few, which would they be, and why?

Rey:  "Last Cry", for obvious reasons.  I really like the way the song turned out and because George was able to really bring out the best qualities in my voice.  I say that with all humility.

I would also have to say...."Mortality".  That song speaks of how people need to understand taht all earthly things end.  No one vexes death or judgement.  I also really like that one because of it's originality.

G2G:  It is definitely original.  I really like the Middle Easter musical parts to it...they really add a unique feel to a pretty heavy song.  Okay, since you brought him up, I have to ask:  What is it like to work with George Ochoa?  Is he pretty intense, laid back, challenging, funny....?  I've spoken with George on the phone a couple of times and he comes across as somewhat intense, but also pretty easy to talk to with a sarcastic kind of humor...


Rey:  (Laughing)  George is a funny guy.  I think George should be asked how it was for HIM to work with ME, because I'm the crazy one.  (Laughing)  George is a great guy and very focused during the sessions.  He cuts loose at times and we had lots of laughs, but it was a great time laying down the tracks.  No challenges to speak of.  We just clicked and it seemed that we were both going in the same direction.

G2G:  Were you there when Les Carlson (Bloodgood) or Larry Farkas (Vengeance Rising/Once Dead) or Oz Fox (Stryper/Bloodgood) were in the studio?

Rey:  I was there a few times when Larry came by, but not when he laid down his tracks.  I wasn't there when Les came by, either.  Oz recorded his tracks elsewhere and sent them to George.

G2G:  George has been pretty up front and aggressive online against people pirating music in general, and pirating the Worldview album specifically.  How much do you think piracy has hurt the industry in general, and maybe even more so in the smaller Christian music market?

Rey:  It's stealing for sure.  Many artists rely on album sales to support their families, and pirating takes away sales, therefore taking hard earned money from the bands.  It has a negative impact on everyone involved.

G2G:  So, to make it easier for people, how can they get the new Worldview album legally?

Rey:  There are many ways to get it, but the best are to either go to www.worldviewmetal.com or www.amazon.com

G2G:  Rey, again, I want to thank you so much for taking the time to talk to me.  It's been an honor.

Rey:  Thank you, Arttie, for the interview.  Hope I didn't sound too whacked out or prideful in any way (laughing).  Honestly, I totally sold out for Jesus and give Him all the glory.

G2G;  You were great, Rey.  Thanks again, best of luck, and God bless!

Well, there you have it.  Nothing too "trashy", but what did you expect from a truly classy guy like Rey Parra?  If you haven't done so yet, I encourage you to check out our review of the new Worldview album, The Chosen Few.  If you like what you hear...and I'm certain you will...you may also want to check out Rey's catalog with Sacred Warrior, as well as George's work with Deliverance and his own band, Recon.

Posted by arttieTHE1manparty at 3:11 PM